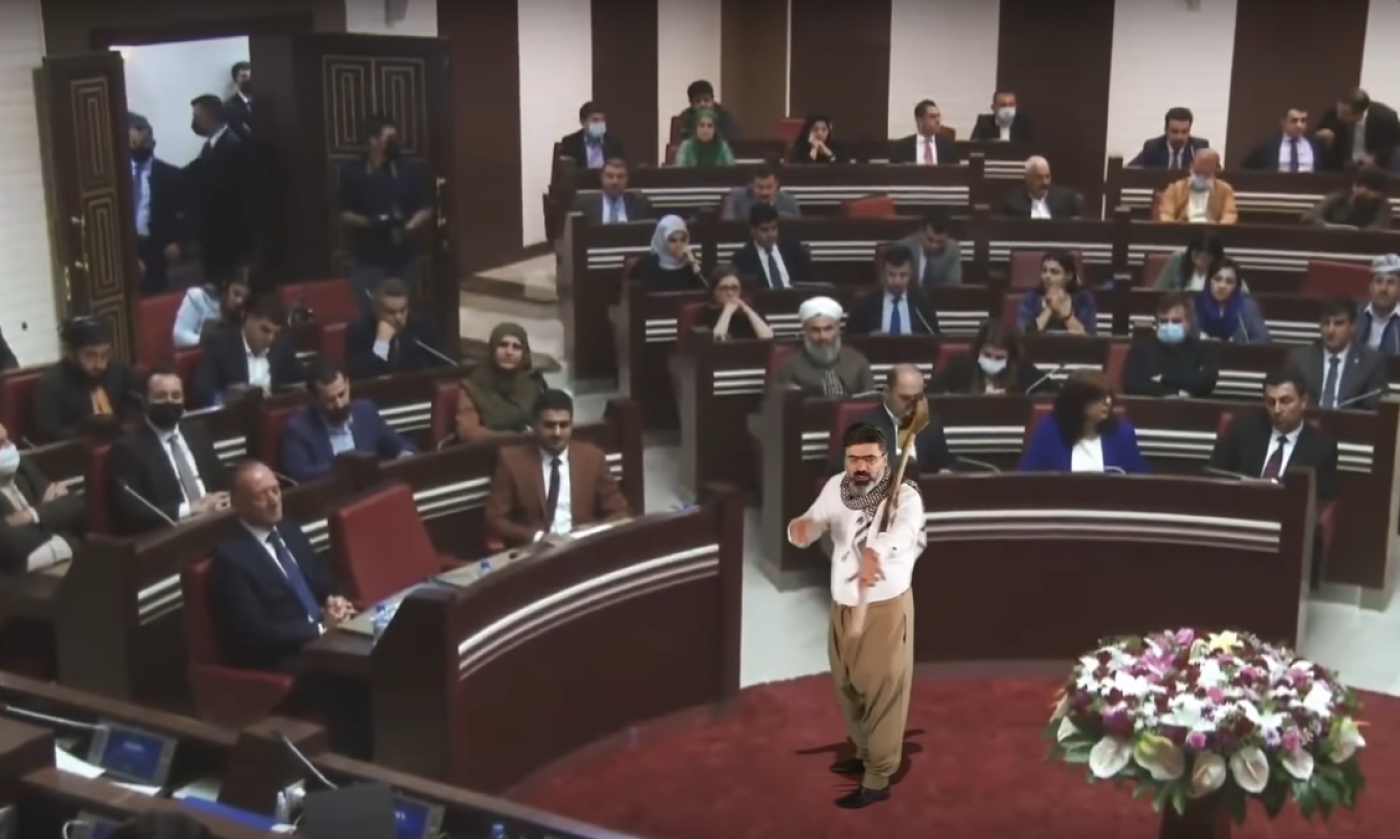 A still from Helgord Qehar's video 'Confusion', in which he berates the KRG parliament on a digital stage (screenshot)
By
Dana Taib Menmy
in
Sulaymaniyah, Iraq

The presidency of parliament in Iraq's autonomous Kurdish region has filed a legal case against a poet and rapper, accusing him of defamation and inciting violence in a critical video clip, in a move that has been criticised by activists.

Although the presidency later promised he would withdraw the suit, the incident has concerned many who fear the erosion of civil liberties under the Kurdistan Regional Government (KRG).

Helgord Qehar, a prominent poet from Duhok province, published a rap video called “Confusion” on YouTube in early January, in which he slammed the KRG parliament and the ruling political establishment as "corrupt" and "donkeys".

The end of the clips sees the parliament set on fire through special effects:

Speaking to Middle East Eye, Qehar said he had later admitted the imagery of the parliament burning was an "error" and had apologised. Despite this, he found himself targeted by the presidency.

“The Kurdistan parliament’s presidency has filed the lawsuit against me at Duhok court via the parliament’s legal department. They have accused me of saying inappropriate speech against lawmakers and inciting people [to arson] and vandalism against formal governmental institutions,” he told MEE via WhatsApp.

Following the issuing of the lawsuit, he visited the parliament on 17 January to make his case to lawmakers.

“During my visit to the parliament, their demand was that it is a legitimate institution that should not have been set on fire in my clip. I told them I have no intention to set ablaze a governmental institution,” he explained.

“However the reality is that if the parliament will not listen to the grievances of people, then its seats will not have any value and people may torch them. I have apologised to the people and the Kurdistan parliament as a legitimate institution, but not as individuals.”

Restriction on freedom of speech

Kurdish activists have described the complaint as a move by the Kurdish authorities to curb freedom of speech.

Kamal Chomani, a Kurdish journalist living in Germany, tweeted that the lawsuit meant the KRG was descending into an "authoritarian regime".

“I am shocked that the Kurdistan parliament has just filed a lawsuit against a singer for a satirical rap song strongly criticising the officials, the parliament and MPs," he wrote.

'The reality is that if the parliament will not listen to the grievances of people, then its seats will not have any value and people may torch them'

"The Kurdistan region of Iraq is further leading to an authoritarian regime where free speech is absent and punishable."

According to reports by international human rights watchdogs, the Iraqi Kurdish region has a history of curbing freedom of speech through legal pursuits against activists, journalists and now artists just to prevent them criticising the political parties who have ruled the region since 1991.

Qehar also said that although the parliament’s presidency had verbally promised to withdraw its lawsuit, it had so far yet to formally do so.

He described freedom of speech under the KRG as "very restricted" but said he would continue to criticise it despite the restrictions.

"The parliament’s legal measure was very civilised and democratic, and I thank them for seeking justice via the court, and not pursuing other measures.”

Since 1991, dozens of artists, poets and journalists have been assassinated in the Kurdistan region, including Marxist poet Bakr Ali, Islamist poet Khider Kosari, journalists Soran Mama Hama, Sardasht Othman and Kawa Garmiani and dozens of others.

Few if any of the perpetrators of the killings have ever been brought to justice.

MEE contacted the head of the KRG parliament legal department, but he was not immediately available to comment.

Niaz Nuri, head of the KRG Artists Syndicate, said that upon their formal request the presidency had decided to withdraw their legal case against the poet.

“We are for freedom of speech, the freedom of artistic work in which artists can make serious criticisms in order to help our society to make progress. But we are not supporting any artistic work that under whatever pretext leads to defamation and attacks against formal institutions,” Nori told MEE in a phone call.

'We are for freedom of speech, the freedom of artistic work in which artists can make serious criticisms in order to help our society to make progress. But we are not supporting any artistic work that under whatever pretext leads to defamation and attacks against formal institutions'

“I have no comment about the clip; we have taken the role of a mediator between both sides and urged parliament to be more tolerant.”

Similarly, Mam Burhan, a member of the KRG’s cultural committee, told MEE in a phone call that he was all for freedom of expression, but artists, intellectuals and journalists should be advised to abide by the principles of social responsibility and journalistic ethics in their works.

“All artistic works should be empty from vulgar words, inflaming violence, defamation and humiliation. But I call on the legislative, executive and judicial authorities to attempt to file few lawsuits and to be tolerant towards artists, intellectuals and journalists on issues of freedom of speech when their works are bearing different interpretations,” Burhan said.

“But every person or institutions have legitimate rights to take legal measures if they feel they have been disgraced.”

What happens if Qehar is convicted?

Lawyers have told MEE that article 433 of Iraq’s 1969 Penal Code No 111 permits judges to punish those who defame others with both imprisonment for three months to five years, or by imposing a fine.

They said that most cases of defamation in the Kurdistan region are punishable by six months' imprisonment or fines, but the detention will not be carried out if the person’s criminal record is clean. 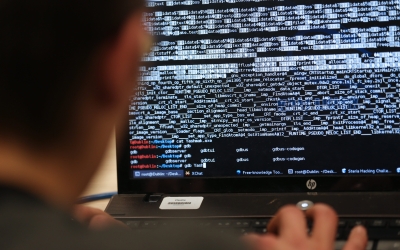 Rewaz Fayaq, the KRG parliament speaker - a member of the ruling Patriotic Union of Kurdistan (PUK) - said at an event in Sulaymaniyah on the media that freedom of speech was "fading in the region yearly”.

She also said at the event that the cultural committee of the KRG parliament would rediscuss a controversial bill for censoring digital media and social media platforms. The bill had been put on hold in recent months due to widespread public pressure from civil rights advocates and social media users.

She said such a step was needed to fill a "legal gap" for regulating digital media, claiming that if the KRG region did not pass its own bill, Baghdad might impose the cybercrimes bill that is now being discussed by the Iraqi parliament.

Human Rights Watch has warned that Baghdad’s bill could be "used to stifle free expression”.

Burhan said that the bill needed to be enriched by holding seminars with media channels and journalists. He said he was for imposing fines rather than imprisonment in the bill.