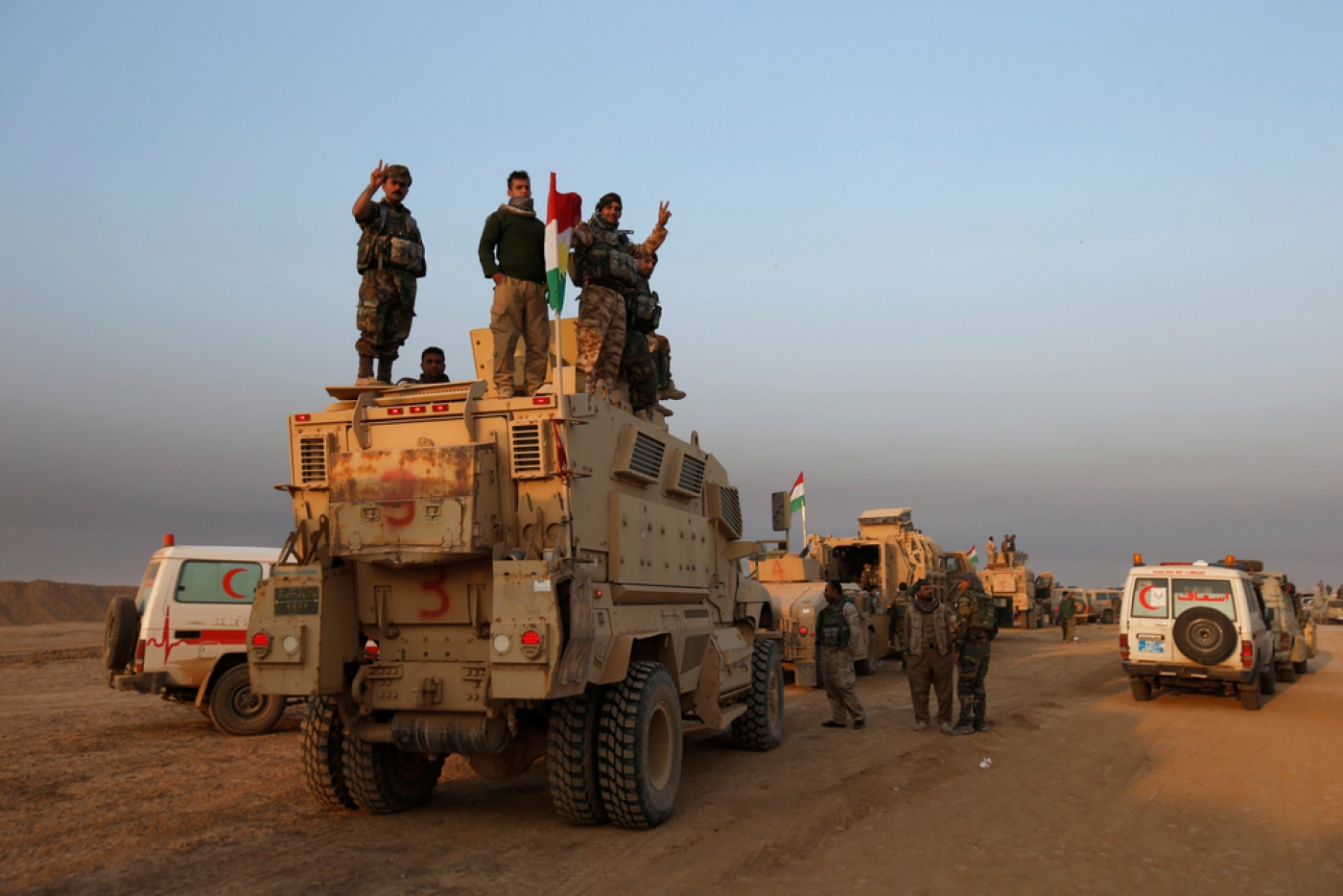 Iraqi Kurdish peshmerga forces attacked an Islamic State-held town northeast of Mosul on Monday, trying to clear a pocket of militants outside the city.

The first waves of a 2,000-strong peshmerga force entered Bashiqa, some in armoured vehicles or Humvees and others on foot, after artillery pounded the town at the foot of a mountain about 15km across the Nineveh plains from Mosul.

"Our aim is to take control and clear out all the Daesh (Islamic State) militants," Lieutenant-Colonel Safeen Rasoul told Reuters. "Our estimates are there are about 100 still left and 10 suicide cars."

Islamic State fighters have sought to slow the offensive on their Mosul stronghold, which entered its fourth week on Monday, with waves of suicide car bomb attacks. Iraqi commanders say there have been 100 on the eastern front and 140 in the south.

As a peshmerga column moved into Bashiqa on Monday, a loud explosion rocked the convoy, and two large plumes of white smoke could be seen just 15 metres away. A peshmerga officer said two suicide car bombs had tried to hit the advancing force.

In eastern districts of Mosul, which Iraqi special forces broke into last week, officers say IS melted into the population, ambushing and isolating troops in what the special forces spokesman called the world's "toughest urban warfare".

Mosul, the largest IS-controlled city in either Iraq or Syria, has been held by the group since its fighters drove the army out of northern Iraq in June 2014.

The Mosul campaign, the most complex military operation in Iraq in a decade, brings together a force of around 100,000 soldiers, security forces, Shia militias and Iraqi Kurdish peshmerga, backed by a US-led coalition, to crush the militants

Across the border, US-backed Syrian fighters have launched their own campaign, called Wrath of the Euphrates, to recapture the IS Syrian bastion of Raqqa.

Twin offensives on Raqqa and Mosul could bring to an end the self-styled caliphate declared by IS leader Abu Bakr al-Baghdadi from the pulpit of a Mosul mosque in 2014.

Baghdadi has told his followers there can be no retreat in a "total war" with their enemies. The militants in Mosul have been waging a fierce and brutal defence, although they have lost ground on all fronts outside the city itself.

To the south of Mosul, security forces said they had recaptured and secured Hammam al-Alil from IS fighters, who they said had kept thousands in the town as human shields as well as marching many others alongside retreating militants towards Mosul as cover from air strikes.

The security forces on the southern front have continued their advance, reaching within 4 km of Mosul's airport, on the southern edge of the city and on the western bank of the Tigris River which runs through its centre.

To the north, a military statement said the army's Sixteenth Infantry Division had also recaptured the village of Bawiza and entered another area, Sada, on the city's northern limits, further tightening the circle of forces around Islamic State.

Shia-dominated militias known as the Popular Mobilisation Units (PMUs) are also fighting to the west of Mosul to seal the routes to the IS-held town of Tal Afar and its territory in neighbouring Syria, to prevent any retreat or reinforcement. Iraq at War
Hundreds forced out of Iraq's Kirkuk after IS attack: Amnesty