A senior Baghdad official says evidence shows nine tourists were killed by Panter artillery shells, but Turkey insists it had nothing to do with the incident 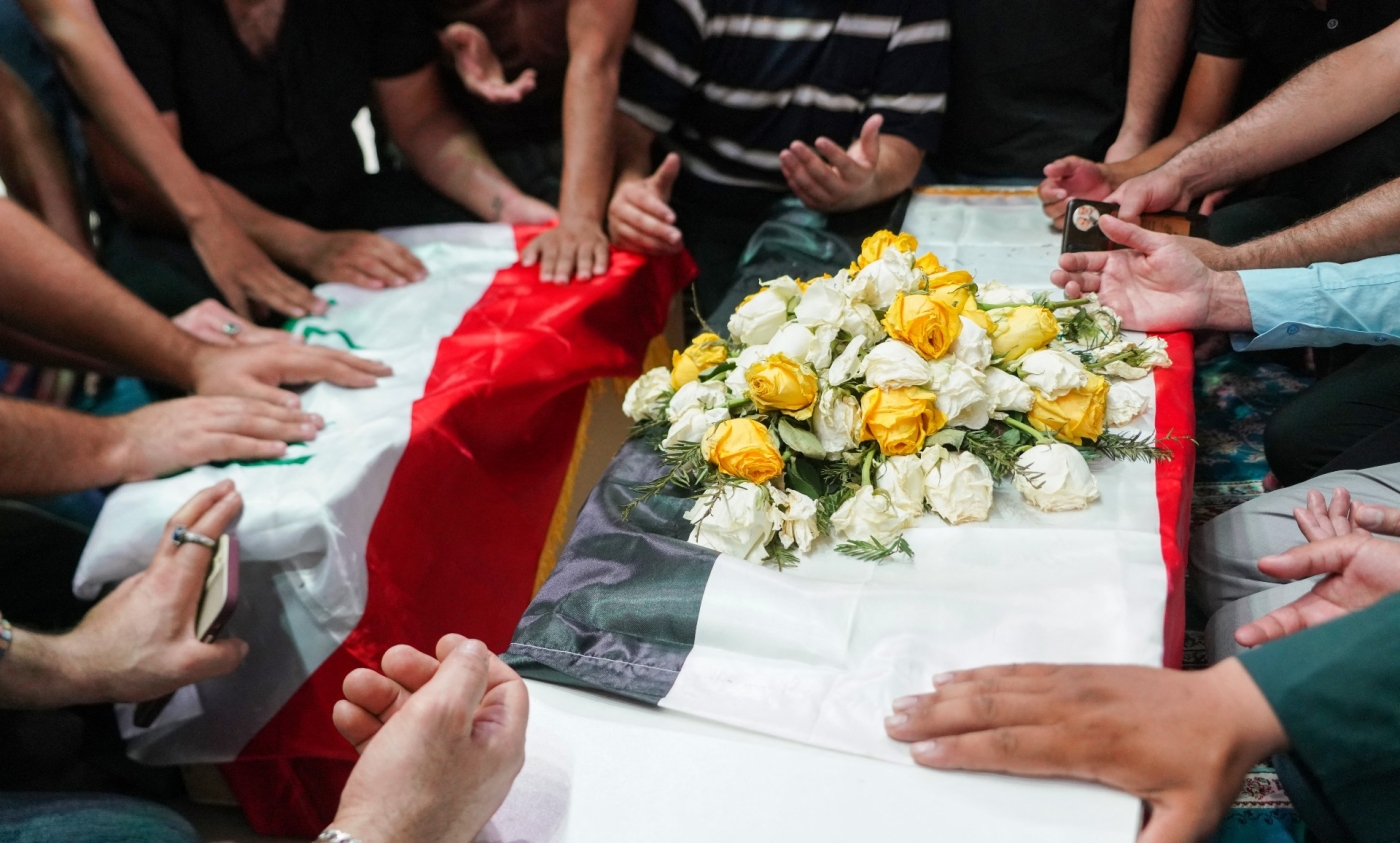 Iraqi mourners pray over the coffins of a woman and her niece killed in Zakho, at their funeral in Najaf on 21 July 2022 (AFP)
By
Suadad al-Salhy
, Levent Kemal
, Ragip Soylu

When explosions began to hit a bustling tourist resort in northern Iraq’s Duhok province, many people reached for their phones. In the footage that subsequently circulated on social media, loud explosions can be heard, dust plumes rise to the air, and panicked and wounded holidaymakers flee or take cover.

Nine tourists were killed in the attack on Wednesday, including a one-year-old girl, two teenagers and a newlywed husband. Iraqi authorities quickly asserted that Turkish forces were responsible, sparking anti-Turkey protests across the country.

Yet Ankara denies any involvement, blaming the PKK Kurdish militants it combats in the area, and has one question for anyone laying the blame on Turkey’s military: where’s the proof?

Unusually in such cases, no photographic evidence of shells or fragments, or the blast scene, has been made public. Baghdad says it is in possession of the evidence, and a senior Iraqi official told Middle East Eye that 155mm artillery shells have been collected. That, he said, indicated a Turkish Panter howitzer was used.

“No armed faction operating inside Iraq has this kind of cannon, but it is an essential part of the armament of the Turkish army,” he added.

The Panter, which was first developed in the 1990s, has a range of 40km. The Iraqi official noted that a new model was being developed, and speculated that a misfire may have occurred during a field test.

However, multiple Turkish sources denied that Turkey was responsible in any way.

The Turkish defence ministry ruled out a Panter test fire mishap, with a Turkish source with knowledge of military matters adding that the new howitzer being developed isn’t yet available to troops. He also said that training is conducted around Konya, a city in central Turkey, 1,000km away from Zakho.

Military sources also said that artillery is not fired at PKK targets in that area from Turkish territory, only from the several military outposts Turkey has in Iraq. They said no Turkish weapons near Zakho were fired on Wednesday.

One senior Turkish military source told MEE there were no Turkish warplanes in the air around Zakho on Wednesday.

Another Turkish source noted Turkey has been using drones with sophisticated cameras and human intelligence to choose targets to bomb, so the likelihood of hitting Iraqi civilians with no PKK militants in the vicinity was very low.

The source said a thorough investigation had to be conducted to analyse the site and determine whether Turkish ammunition had been used.

“The Turkish military’s weapons and ammunition types are well known by experts, so this could be easily revealed,” the source said. “The Turkish military doesn’t use cannon or mortar fire in this area, either. Instead, it deploys these assets further east where PKK militants are located.”

Turkey reportedly carried out an air strike on Bersafi refugee camp around 5km northwest of the Zakho resort on Tuesday and staged a helicopter attack in the Haftanin region, more than 40km to the northeast, on Monday. 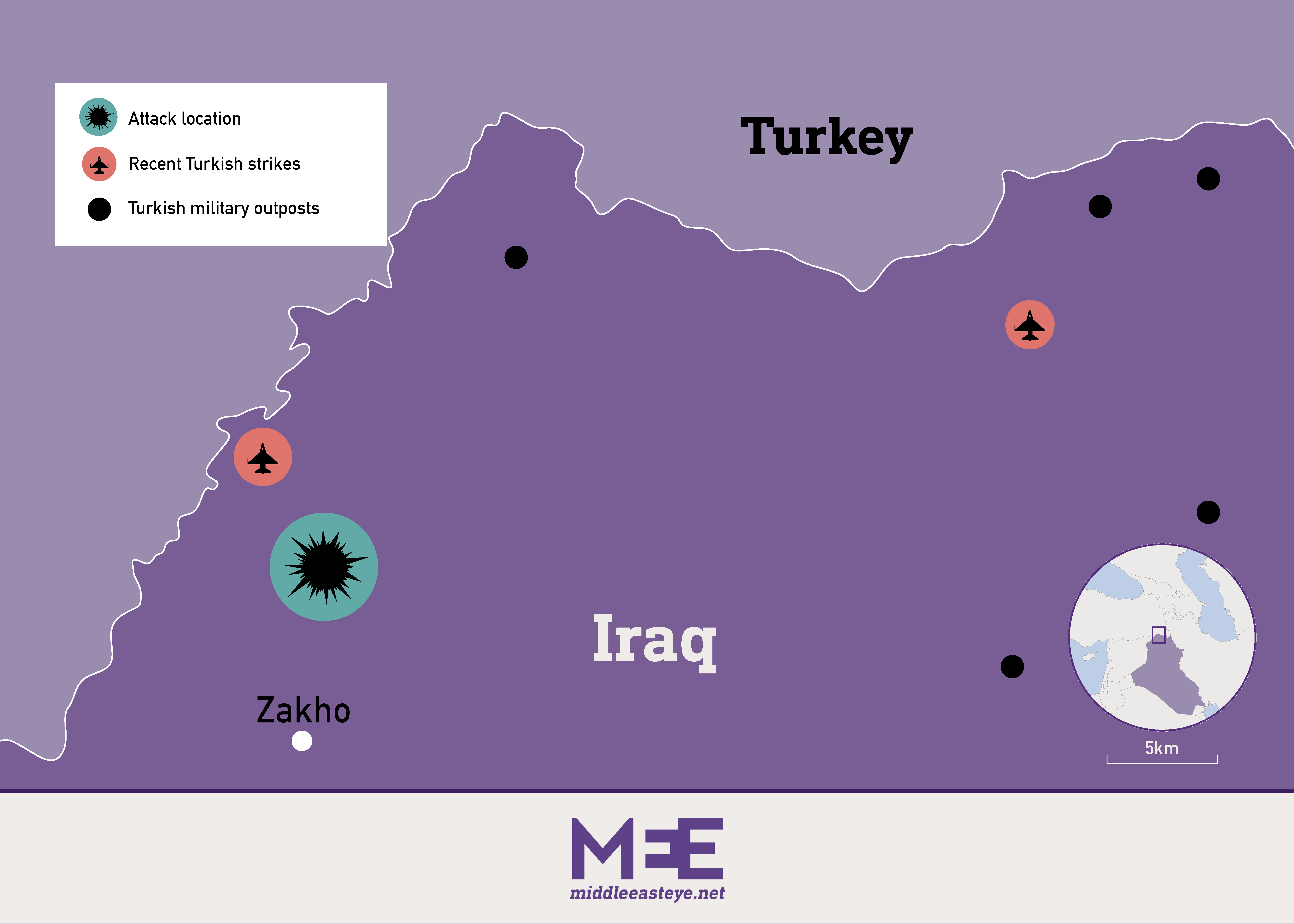 A separate Turkish security source said that the absence of footage from the blast sites makes it harder for everyone to properly analyse what really happened.

“Any cannon fire would leave large craters in the area, or at least we would see the point of contact to understand what really went down,” the source said. “We only have footage of smoke and injured people, which doesn’t help. Using cannon fire for moving objects like humans also doesn't militarily make sense.”

Though the Iraqi government has outright blamed Ankara, it is yet to release any evidence. Only Hoshyar Zebari, a former foreign minister, has publicly said a 155mm cannon was used.

The US, UN and UK have all condemned the attack, but none of their statements suggested any perpetrator, or mentioned Turkey. The United States, however, said “we maintain our strong support for Iraq’s sovereignty” and the UN also noted that “the sovereignty and territorial integrity of the Republic of Iraq must be respected at all times”.

While the prime minister of Iraq’s semi-autonomous Kurdistan region, where Zakho is located, outright blamed Turkey in his Arabic statement, the English version only mentions “infighting by Turkey and the PKK”. Masrour Barzani’s Kurdish Democratic Party, which rules Iraqi Kurdistan, has longstanding relations with Turkey.

'Any cannon fire would leave large craters in the area, or at least we would see the point of contact to understand what really went down'

Certainly, Ankara has sought to blame the incident on the PKK, which has waged a decades-long insurgency against Turkey, a conflict that has taken some 40,000 lives and since April has involved a Turkish land and air campaign dubbed Operation Claw-Lock.

The Turkish source familiar with military developments speculated that the Kurdish militant group could have misfired and struck the civilians while trying to hit a Turkish military station nearby. “The PKK’s mobile units frequently harass Turkish stations with mortar fire,” the source said.

The Iraqi official also noted that the PKK is present and active around Zakho, and Turkish military operations are regularly carried out in the region.

He said it is an unsafe area for tourists, and allowing tourism companies to send people there is a "disastrous mistake". Yet he also expressed surprise that a busy tourist resort could be targeted by Turkey in this way.

“Turkey has two military bases in Kurdistan and dozens of intelligence stations. How can they make such a mistake?”

A statement attributed to the PKK and circulated on social media denied responsibility for the attack and blamed Turkey.

Iraq has been in limbo since October’s parliamentary elections. Repeated failure to form a new government has increasingly fractured the political landscape.

However, the Zakho bombing and the subsequent anger against Turkey has forged some rare unity in the country. Hundreds of protesters have gathered outside Turkish diplomatic missions in Baghdad, Basra, Najaf, Karbala and Nasiriyah.

The mayor of a village in northern Iraq said on Friday that two bomb-laden drones targeting a Turkish military base in Bamerne were shot down overnight.

All the nine Zakho victims and most of the 23 wounded were Arab Iraqis holidaying in the north. Turkish raids in Iraqi Kurdistan have reportedly killed other civilians in recent years.

“This time the victims are from Baghdad and the southern provinces, so you can see this flurry of political and governmental reactions. They cannot turn a blind eye to such an attack, although previous attacks were similar and there were casualties,” the Iraqi official said.

Although there have been calls for Turkish troops to leave Iraq, and MEE has been told that plans are being made to take the issue to the UN Security Council, no pullout is expected. Iraq’s foreign ministry has warned that it will “resort to the economic card” to pressure Turkey, with sources saying boycotts are being discussed. Yet this will not be easy.

“Turkey needs us, it’s true, but we need it more,” the Iraqi official said. “We have a real problem with water shortages, and without sustaining political and economic understandings with Turkey we can get nothing.”