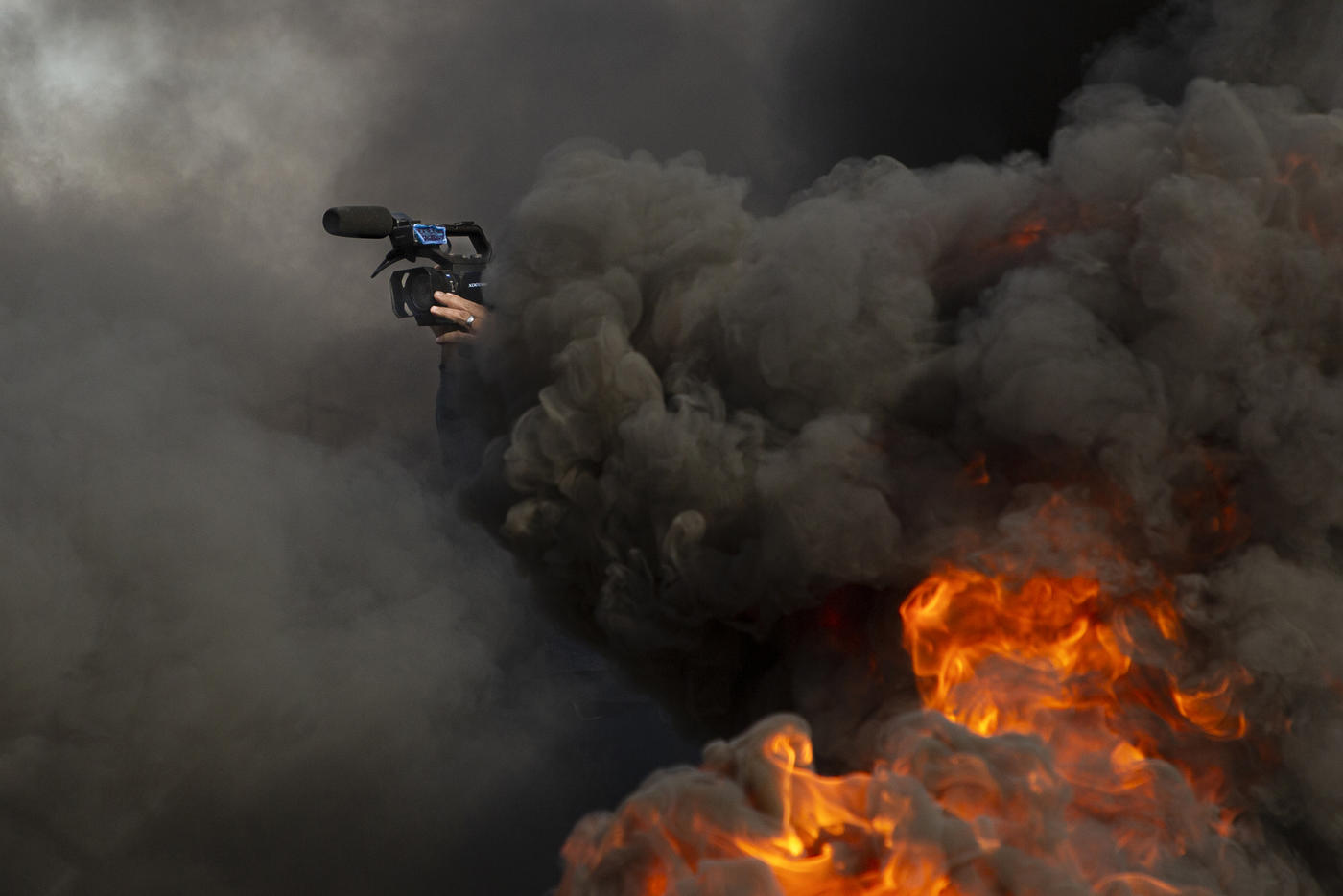 There has long been a perception in Iraq that journalists live high-rolling lives, free from the pressures that many face in the country on a daily basis.

But the reality is often one of death threats, and financial and political pressure.

One such case is that of Ali Jawad, a former journalist with the state-owned Al-Iraqiya TV news outlet.

On 5 March the director of the Iraqi Media Network - which own Al-Iraqiya - issued a statement asking the finance department to cut off salaries for two journalists, Jawad and his colleague Ahmed Abdulhussein.

The reason they were given was that posts they had made on social media about Iraq's months-long anti-government protest movement had contravened IMN's regulations.

“Since early October 2019, I was going to the protest square to demand our rights," said Jawad, speaking to Middle East Eye about the ordeal.

"As an Iraqi citizen, the Iraqi constitution allows all individuals to protest peacefully - then I posted on my personal social media platforms what I saw on the ground."

Jawad said that in February 2020, Rami Ahmed, IMN’s media manager, filed a paper to the head of IMN accusing them of not attending on a daily basis and having no productivity, prompting director Fazil Abbas Farajallah to open an investigation.

'It is an illogical reason to make me not practice my rights, or not demand our rights - we were deprived for years as the country was run by a number of corrupt governments'

“Not just on paper - he wrote against us on social media saying that I had a good salary [but was still protesting]," said Jawad.

“It is an illogical reason to make me not practice my rights, or not demand our rights - we were deprived for years as the country was run by a number of corrupt governments.”

In recent days a hashtag circulated on social media saying “We Are All Ali Jawad”, while protesters in the central Baghdad protest hub of Tahrir Square called on IMN and Iraqi authorities to protect journalism.

One 25-year-old Baghdad-based protester, who did not want to be identified, said the pressure on journalists had been "an issue since the beginning of the protests" and specifically criticised Al-Iraqiya for refusing to cover the protests fairly.

“The protestors are loyal people, and will remember anyone who supported them, whether physically or by getting their voices to the public," he said.

"They will stand with the journalists who are unjustly being punished under the eyes of the new government who promised to protect them.”

'As a citizen not as a journalist'

"I was surprised that I could not receive the April month salary, no one told me why that happened," he said.

'What IMN did is illegal, so we are awaiting Ali Jawad's request for an official assignment to appoint to him a lawyer to defend him, then we will file a lawsuit against IMN'

He also found himself subjected to interrogation by a committee, at which he was asked numerous questions about his involvement in the protests.

“'Why did you go to protest? Did you represent IMN during the unrest?'” the investigation committee asked Jawad.

“'No, I represent only myself, and I went to the protest area as a citizen not as a journalist, it is a simple rightful right to stand against corruption just like thousands of Iraqis did,” he said he replied.

Iraq is currently ranked 162 out of 180 countries in RSF’s 2019 World Press Freedom Index.

Scores of journalists have been killed and kidnapped in Iraq in recent decades, including several since the beginning of anti-government protests in October 2019.

Jawad started in journalism in 2007, joining IMN in 2014. At that time, he was assigned as a war-zone reporter, covering the battle against the Islamic State group.

On 19 May, Jawad posted a tweet saying: “A person who has not been swayed while covering battles will not be swayed by cutting off his salary or investigations.”

He confirmed to MEE that he was not the only one facing pressure over the protests - many of his colleagues were also subjected to an investigation for the same reasons.

One IMN employee told MEE the person who had originally filed against Jawad and his colleague had since been fired.

“I am against what the IMN manager did, it is a violation of the freedom of press. Moreover, Ali Jawad is one of the talented and big journalists and serve the Iraqi media for long time," said the employee, who did not want to reveal their identity.

Jawad also criticised the Iraqi Journalists Syndicate for not standing by him.

MEE tried to get a comment from the head of the Iraqi Journalists Syndicate but it would not answer phone calls. Ibrahim al-Sarraj, the head of the Iraqi Journalists Rights Defense Association (IJRDA), told MEE: “Sorry to hear that the brave and professional journalist Ali Jawad is subjected to blatant violation that contradicts all laws. To be punished by cutting his salary over the background of publishing a post on his own Facebook page is a violation and aggression by the Iraqi Media Network.”

“What IMN did is illegal, so we are awaiting Ali Jawad's request for an official assignment to appoint to him a lawyer to defend him, then we will file a lawsuit against IMN.”

IMN head Farajallah told MEE that Jawad had his wages docked over his refusal to turn up to the investigation committee meetings.

He added that Jawad had made "abusive posts" on social media.

“Most of the network employees are active in the demonstrations at all times and we have not prevented anyone or held anyone accountable," he said.

“As a normal measure, we opened an investigation on what he did, it is just like any media outlet does with their employees."