Iraqi Kurds vote on independence, amid threats from Baghdad and neighbours ERBIL, Iraq - Iraqi Prime Minister Haider al-Abadi ordered security services on Monday "to protect citizens being threatened and coerced" in the autonomous Kurdish region where a referendum on independence is under way.

Abadi's order was announced in a statement from his office.

Abadi has said the vote is against the constitution and asked the Kurdish authorities to cancel it.

Polling stations opened their doors at 8am and should close at 6pm. An initial result is expected in the evening, with the final results to be announced within 72 hours.

We are finished with the Arabs

Jamal, a Kurdish taxi driver in Erbil's Ainkawa suburb, proudly displayed his ink-stained finger, evidence that he had already voted, and said: "We are finished with the Arabs.

"Arabs in Kurdistan, no problem. Kurds in Baghdad, big problem," he added, speaking to MEE.

The vote, expected to deliver a comfortable "yes" for independence, is not binding and is meant to give Massoud Barzani's KRG a mandate to negotiate secession of the oil-producing region with Baghdad and neighbouring states.

Mohammad, who lives in the Erbil district of Mahabad, was undeterred by threats from Baghdad, and neighbouring countries.

“If they let us [leave] or they don’t, we will do it - we don’t need to ask for their authorisation to make our republic.

“It is our right and we have been fighting for this for 100 years and we are going to do it if they want or not.”

But Niruj, originally from Mosul, said she did not believe that there would be any conflict between Kurdistan and the central government in Baghdad.

“I don’t believe that we will face any problems with Iraq, but if we will, we will be behind our President, Massoud Barzani.”

Speaking to MEE after voting, she said that: “We would vote ‘yes’ one hundred times if we could.”

“As we are humans, we are Kurds, and we have the right to have our own state, just as the Iraqi people have their own state.”

George, a Christian originally from Basra in southern Iraq, said the fiery rhetoric would likely die down after the referendum.

“Like a big fire, it will soon die down.”

He moved to Iraqi Kurdistan in 2010, he said, fleeing violence in his hometown.

“I came here looking for safety and security, so of course I am voting ‘yes,’” he told MEE.

"Everyone has found safety and security here.”

Voters were asked to tick yes or no on the ballot asking one question in Kurdish, Turkish, Arabic and Assyrian: "Do you want the Kurdistan region and Kurdistani areas outside the region to become an independent country?"

The referendum is held despite intense international pressure on Barzani to call it off, amid fears that it would spark fresh conflicts with Baghdad and with Iraq's powerful neighbours, Iran and Turkey.

Iran shut its border with Iraqi Kurdistan in response to its independence referendum, the foreign ministry said on Monday.

"At the request of the Iraqi government, we have closed our land and air borders" with Iraqi Kurdistan, said foreign ministry spokesman Bahram Ghasemi, adding that the referendum was "illegal and illegitimate".

Turkish President Tayyip Erdogan on Monday said that Ankara could cut off the pipeline that carries oil from northern Iraq to the outside world, amid threats of retaliation.

"After this, let's see through which channels the northern Iraqi regional government will send its oil, or where it will sell it," Erdogan said in a speech at a forum in Istanbul.

"We have the tap. The moment we close the tap, then it's done."

The Turkish foreign ministry said the country would take "all measures" under international law if the referendum generates threats to Turkey's national security.

The ministry said it did not recognise the referendum and would view its outcome as null and void, adding that the KRG was threatening the peace and stability of Iraq and the whole region.

It warned of the possibility of "radical elements and terrorists" engaging in acts which target national security in the aftermath of the referendum.

"We stress again that we will take all measures arising from international law and the Turkish parliament's authority in the face of every kind of threat to our national security in Iraq generally," the ministry said.

Despite being unable to vote, Aziz, originally from Kobane in Syria's Kurdish region, was on the streets of Erbil, celebrating the vote.

Draped in the Kurdish flag, he told MEE he supported the independence referendum.

Damascus has also rejected the vote.

"We in Syria only recognise a united Iraq and reject any procedure that leads to the fragmentation of Iraq," foreign minister Walid al-Muallem said, as reported by Syrian state news agency SANA.

"This step is rejected and we do not recognise it and yesterday I informed the Iraqi foreign minister of this stance." 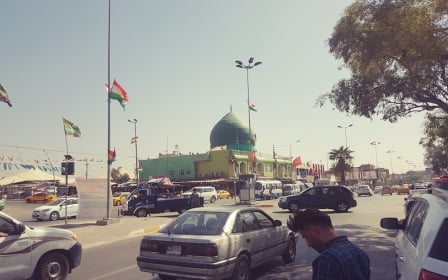 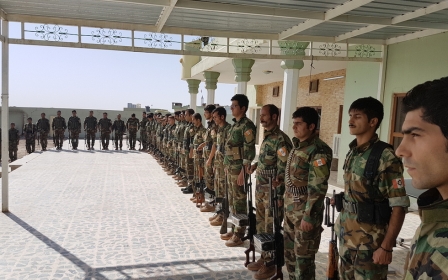 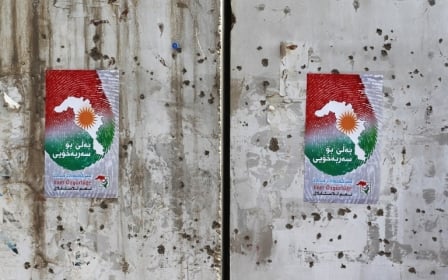