Participants walk past brochures of previous funds collected by the International Islamic Relief Organization (IIRO), during the Kuwait International Conference for Reconstruction of Iraq (AFP)
By
MEE and agencies

Rebuilding Iraq after years of war and economic turmoil will cost $88.2 billion, the director-general of the country's planning ministry, Qusay Abdulfattah, told an international conference in Kuwait on Monday.

About $22bn will be required in the short term and $65 billion in the medium term, Adulfattah said at the conference, which was arranged to discuss Iraq's reconstruction.

The housing sector has the most urgent need for funds, he added.

Iraq is still reeling from the rise of the Islamic State group and the punishing fightback it took to crush the group, with swathes of its territory in ruins and millions of people displaced.

Baghdad is looking to drum up funds at the Kuwait conference from Monday to Wednesday after announcing the defeat of IS nationwide at the end of last year.

Authorities in the resource-rich nation say there has been a heavy toll on oil, electricity and manufacturing infrastructure, as well as basic services such as water and sanitation.

"I have come to tell you of France's support and to accompany you. We will always be there," Le Drian said.

"We were there to participate in the coalition. We will also be there in the reconstruction phase."

France has been a key member of the US-led military coalition fighting IS after the  group seized large swathes of Iraq and neighbouring Syria in 2014.

"We hope French expertise will be used for the reconstruction," Iraq's Foreign Minister Ibrahim al-Jaafari replied.

Abadi has previously said Baghdad needed to raise $100 billion to rebuild after the fight against IS and decades of sanctions and war. 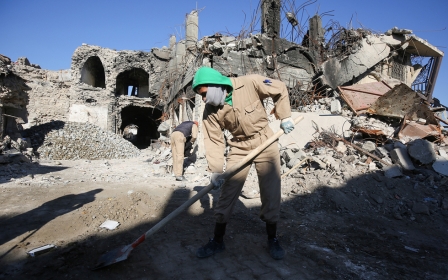 Iraq at War
US will not contribute cash at Iraq reconstruction conference: Report 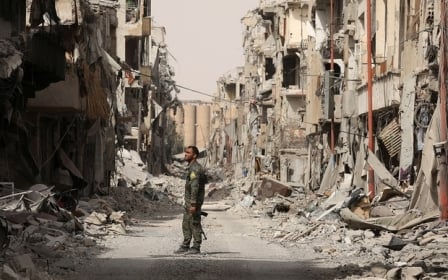