Islamic State terrorises Iraqi Christians: 'They told me to spit on the crucifix' 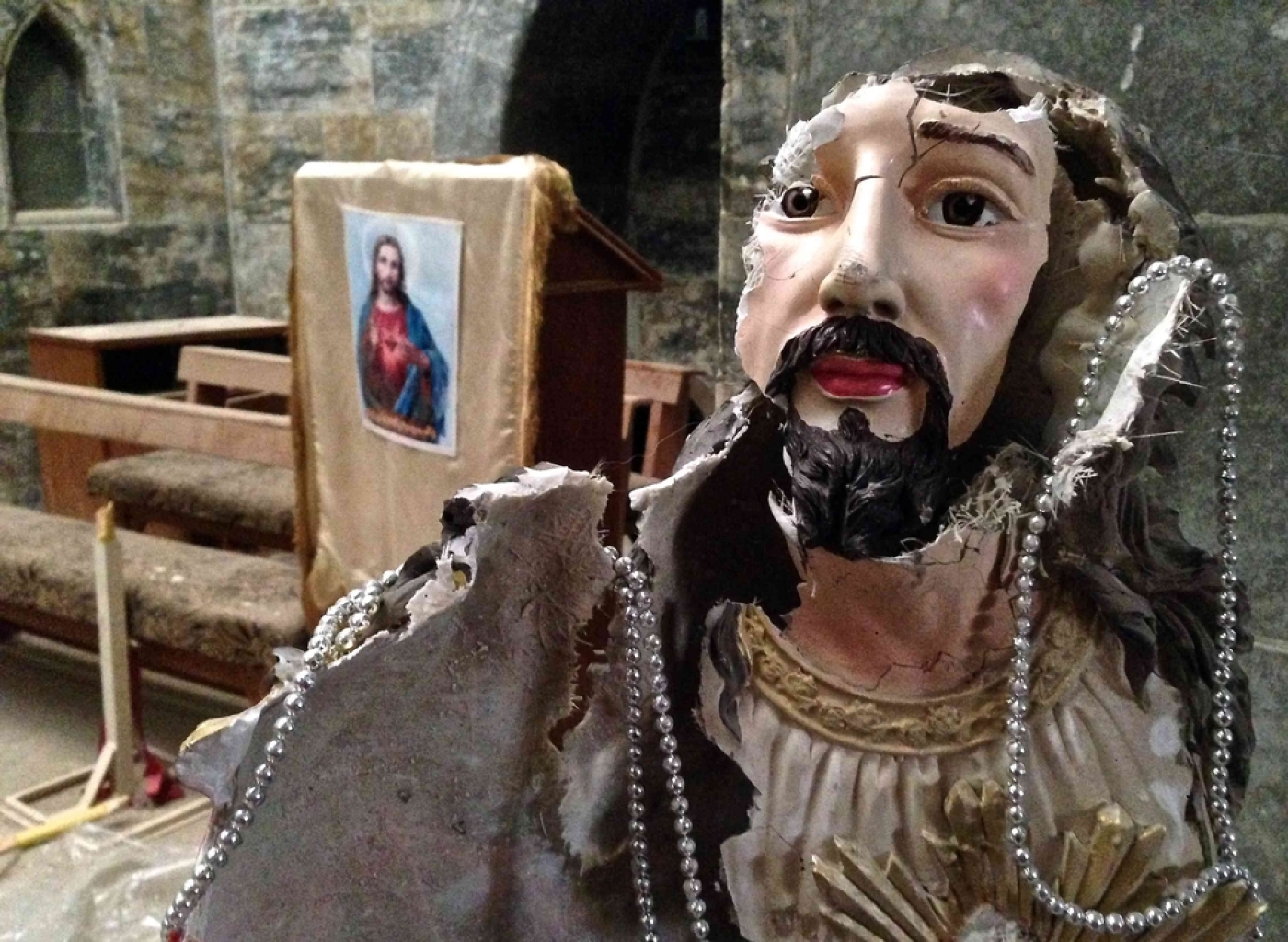 In Qaraqosh, Christians have gathered fragments of religious statues smashed by IS (Tom Westcott/MEE)
By
Tom Westcott

Qaraqosh, Iraq - “IS had a factory here for making mortars and bombs,” says Father Yacouba Bowi, shaking his head with incredulity. He gestures around the desecrated church of Mar Gorgis in what was Iraq’s largest Christian town of Qaraqosh.

Around him, religious images have been torn from the walls, statues beheaded and crosses broken. “IS achieved what they wanted here, which was not just to destroy religious buildings but also to destroy the feelings and the very souls of the Christians here.”

Sacks of fertiliser and barrels of sugar, along with kitchen scales and metallic mixing bowls, are still strewn around the church building, which Islamic State (IS) militants used for more than two years to concoct lethal chemical mixtures to pack into car-bombs and IEDs.

During the two and a half years IS occupied Qaraqosh, which is 30km south of Mosul, their men toppled steeples, set churches ablaze, burned religious volumes and hymnals on a huge pyre, and desecrated church interiors, decapitating statues or using them for target practice.

The grounds of Al-Tahira church, the largest place of worship in the town, were used as a shooting range for trainee IS militants, who fired endless rounds into religious statues and mannequins, lined up in front of one of the church’s historic chapels and reducing one of its walls to rubble.

'When the Iraqi Army first entered Qaraqosh in October, IS targeted them with the suicide vehicles they made in the church'

Empty bullet casings litter the floor of the church among IS flag stencils. Scrawled on the wall above a plastic plant are "recipes" for two car-bombs, listing the exact amounts needed of sugar, fertiliser and sorbitol - ordinary products that IS put to destructive ends.

“They made all types of explosives here by hand, which they used in Christian places and on Iraqi Army military positions,” said Salem, one of Iraqi Kurdistan’s small Peshmerga unit of Christian soldiers.

Outside the church, the rubble of obliterated streets shows the results of these car-bombs.

“When the Iraqi Army first entered Qaraqosh in October, IS targeted them with the suicide vehicles they made in the church,” he says. “It was like a miracle, but actually only a handful of Iraqi Army soldiers were killed, and mainly by snipers, not these huge explosions.”

The Christian pensioners who survived IS

When IS reached the town in August 2014, most of Qaraqosh’s 50,000 residents fled, but two elderly Christian couples refused to leave. Zarifa Dadoo, 78, told MEE how she and a friend eked out a paltry and diminished existence for more than two years under IS after the death and disappearance of their husbands.

'We had no choice but to convert, so we agreed between ourselves that ‘Muslim’ was just a word'

Dadoo’s terminally ill octogenarian husband died shortly after IS seized control: Their first act of cruelty was to forbid her from attending his funeral. She moved in with the other elderly couple in the town, but her friend’s husband rapidly started to lose his mind from systematic mental abuse by IS militants, who repeatedly told him they had murdered his sons, who served in the local military. One day he disappeared.

“We asked one of the young IS men about him and he told us the last time he saw the old man he was being thrown between militants by his belt like a ball,” she says, in a voice stripped of emotion. “We still don’t know if he died or not.”

The two ladies were forced at gunpoint to convert to Islam. But despite this, they lived in terror of visitations by IS fighters, who arbitrarily appeared at their door, and under whose hands they suffered verbal and physical abuse, including being beaten, stripped naked and robbed.

“One day a fighter came and demanded we gave him our money and jewellery. We told him the others had already taken everything but he didn’t believe us,” Dadoo says. “He searched us and then made us strip naked and found the little jewellery and money we had, which we had sewn into secret pockets in our underwear. He was very angry and hit us.”

Forced to spit on crucifix

The militants were on a rotation that meant they changed every week or 10 days, so the women were never left in peace for long. Dadoo says the worst moments the pair endured was being forced to “prove” they had converted to Islam.

“We had no choice but to convert, so we agreed between ourselves that ‘Muslim’ was just a word. While we prayed with IS when they forced us to, we still prayed to the Virgin Mary in secret,” she says.

“One day a fighter came and took all our religious statues and pictures and crosses and tore them up or broke them and then ordered me to spit on the crucifix,” Dadoo says.

“My friend told me to do just what they said, promising me that God wouldn’t judge or punish me for it.”

The IS fighter then forced Dadoo to stamp on the face of an image of Mary, the mother of Jesus, before setting light to the image.

"He kept trying to burn it, but the face wouldn’t burn and I still keep that half-burned picture in my purse,” she says. “But everything else, I put in a plastic bag and buried in the yard, so they couldn’t desecrate the images again.”

When their food supplies ran out, the two elderly ladies snuck around the town, foraging larders in the abandoned homes of neighbours and sneaking into long-closed shops to find enough to survive. They became so accustomed to living inside, with no idea about what was happening outside, that they did not even realise when the Iraqi Army liberated the town in November.

“On the fifth day we were here, we heard a voice in one house and found the two old ladies,” says General Behnam Aboush, who heads the Christian military unit now securing the town. The pair were rescued and taken to Erbil’s Christian enclave of Ainkawa, where most of Qaraqosh’s displaced population have lived since fleeing their town.

First we rebuild ourselves, then our town

The ghost town is starting to come back to life since its liberation, but it remains on the fringes of the conflict. Bulldozers are now clearing the streets of rubble and teams of electricians are working to repair the ruined infrastructure.

“There’s no water and no electricity at the moment, so people can’t come back, and they are also still too scared to return,” says Aboush. “We hope, if there is proper security, that people will start coming back in the new year.”

But widespread devastation awaits Qaraqosh’s former residents. Retreating IS fighters set fire to more than a third of the Christian homes in the town, having spent the preceding two years rampaging through residential districts, looting and destroying homes. Only the most luxurious properties, which they seized for their own use, were spared.

Ziad Kakumi, 40, visiting his home after more than two years, was devastated to find it a burned-out shell, with holes knocked through the main walls, where IS fighters created a network of routes enabling them to move across the town without being seen from the air.

'What happened here was a terrible thing. I cannot understand how a creature created by God could do something like this'

“They used C4 explosives, which burn very, very hot, so the whole structure and fabric of the house has been damaged,” he says, prodding at the blackened ceiling, its charred remnants crumbling under his touch.

“It will be very hard to repair because of this and, anyway, where would I get the money?” He said that the displaced Christian community has received no help from Iraq’s central government and that he does not expect any financial assistance in the future.

On another street, 20-year-old Rami picks through the charred wreckage of his former life, running through his memories of the decor and layout of the family home when he last saw it.

READ: Islamic State's Libya war: 'They used a baby as bait to kill us'

“I’m so sad and angry to see this. Just five months before we had to flee, we spent 30 million dinars completely renovating the house and it was all new,” he recalls. “Now everything is destroyed.”

Returning residents make a sad tour of their broken town, driving past smashed shop fronts, crumpled buildings and desecrated churches, above which volunteers have raised makeshift wooden crosses. Amid the wreckage and ruins of the town’s eight churches, visitors have gathered small broken religious artefacts and pictures and placed them reverently on the altars.

“We did this to show our love for Christ and as a symbol of the new life that will return to our churches and our town,” says Sara, a former resident, offering prayers in the blackened chancel of Al-Tahira church.

“What happened here was a terrible thing. I cannot understand how a creature created by God could do something like this. Religion
Christians celebrate the Biblical journey of Mary, Joseph and Jesus to Egypt