An ongoing attack by the Islamic State (IS) group in the Iraqi city of Kirkuk has killed at least 46 people, mostly members of the security forces, security and medical sources said Saturday.

"We have 46 dead and 133 wounded, most of them members of the security services, as result of the clashes with Daesh [IS]," an interior ministry brigadier general told AFP.

The toll was confirmed by a source at the Kirkuk health directorate. The brigadier general also said at least 25 jihadist attackers had been killed since the raid was launched early Friday.

Iraqi security forces also announced that they killed 48 of the gunmen who had stormed parts of Kirkuk, the city's police chief said.

"Forty-eight Daesh (IS) terrorists have been killed in the clashes," Brigadier General Khattab Omar Aref told AFP, adding that some of them blew themselves up when the security forces cornered them.

He will meet commanders from the 60-nation coalition which is led by the United States and assists Iraqi forces in their drive against the jihadists.

Carter is also due to meet Iraqi Prime Minister Haider al-Abadi and is expected to discuss Baghdad's objections to Turkish involvement in the Mosul operations.

IS launched its diversionary attack on Kirkuk in northern Iraq on Friday, as an air strike also killed 15 women at a shrine near the city.

"Fifteen women were killed and another 50 wounded in a raid that targeted a Shia place of worship at Dakuk," local council chief Amir Huda Karam told AFP. The toll was confirmed by Dr Abbas Mustafa Dakuki at a local hospital. It was unknown who was responsible for the air strike.

IS launched the attack on an Iranian-run power station project outside Kirkuk as Iraqi and Kurdish forces were seizing territory around Mosul in preparation for an offensive against the group's last major stronghold in Iraq.

A Kurdish commander told the VOA news agency that the attack was the work of IS sleeper cells trying to distract government fighters from the ongoing offensive against IS-controlled Mosul.

The IS assault on Kirkuk, which lies in an oil-producing region, killed 18 members of the security forces and workers at the power station project, including two Iranians, a hospital source said.

Kirkuk is east of Hawija, a pocket still under control of IS that lies between Baghdad and Mosul.

With air and ground support from the US-led coalition, Iraqi government forces have captured eight villages south and southeast of Mosul. Kurdish forces attacking from the north and east also captured several villages, according to statements from their respective military commands overnight.

The offensive that started on Monday to recapture Mosul is expected to become the biggest battle fought in Iraq since the US-led invasion in 2003.

The United Nations says Mosul may require the biggest humanitarian relief operation in the world, with worst-case scenario forecasts of up to a million people being uprooted.

About 1.5 million residents are still believed to be inside Mosul. IS has taken 550 families from villages around the city and is holding them close to its locations within the city, probably as human shields, a spokeswoman for the UN human rights office said in Geneva.

The fighting has so far forced 5,640 people to flee their homes in the vicinity of the city, the International Organization for Migration said late on Thursday.

The Turkish Red Crescent said it was sending aid trucks to northern Iraq with food and humanitarian supplies for 10,000 people displaced by fighting around Mosul.

A US service member died on Thursday from wounds sustained in an improvised explosive device blast near the city.

Roughly 5,000 US forces are in Iraq. More than 100 of them are embedded with Iraqi and Kurdish Peshmerga forces, advising commanders and helping them ensure coalition air power hits the right targets, officials say.

However, the Kurdish military command complained that air support wasn't enough on Thursday.

"Regrettably a number of Peshmerga have paid the ultimate sacrifice for us to deliver today's gains against ISIL. Further, Global Coalition warplanes and support were not as decisive as in the past," the Kurdish command said in a statement.

Turkey and Iraq reached an agreement in principle that may eventually allow a Turkish role in the campaign to retake Mosul from IS, Defense Secretary Carter said on Friday after talks with Turkish President Recep Tayyip Erdogan.

"I think there's agreement there in principle, but now we're down to the practicalities of that ... and that's what we're working through," he told reporters as he ended a trip to Ankara.

A senior Kurdish military official told Reuters the offensive by the Iraqi and Kurdish forces was moving steadily as they push into villages on the outskirts of Mosul.

He said the offensive may slow once they approach the city itself, where IS has built trenches, dug tunnels and may use civilians as human shields.

"I believe it will be more clear within the coming weeks once we get rid of those villages and we come closer to the city how quickly this war will end. If they [IS] decide to defend the actual city then the process will slow down."

IS denied that government forces had advanced. Under the headline, "The crusade on Nineveh gets a lousy start," the group's weekly online magazine Al-Nabaa said it repelled assaults on all fronts, killing dozens in ambushes and suicide attacks and destroying dozens of vehicles, including tanks.

In online statements, IS said it had launched a series of counter-attacks and four suicide bombings to take back villages that fell on Thursday to the army and the Kurds, and that it had blocked all their fresh offensives.

In Kirkuk, some of the IS attackers remained holed up in a mosque and an abandoned hotel.

The militants also cut the road between the city and a power station 30 km to the north.

Several dozen took part in the assault, according to security sources who couldn't confirm a claim by IS that it had taken a Kurdish police officer hostage.

The assailants in Kirkuk came from outside the city, said the head of Iraq's Special Forces, Lieutenant General Talib Shaghati, speaking on a frontline east of Mosul.

Iran's foreign ministry spokesman Bahram Ghasemi reacted to the killing of the Iranian citizens in Kirkuk, saying these attacks are "the last breath of terrorists in Iraq".

At least eight militants were killed, either by blowing themselves up or in clashes with the security forces, Kurdish sources said. Kurdish forces had dislodged the militants from all the police and public buildings they had seized before dawn, they said.

Kurdish NRT TV footage showed machine gun fire hitting a drab two-floor building that used to be a hotel, and cars burning in a nearby street.

IS claimed the attacks in online statements, and authorities declared a curfew in the city as Kurdish forces were getting reinforcements.

Kurdish Peshmerga fighters took control of Kirkuk in 2014, after the Iraqi army withdrew from the region, fleeing an IS advance through northern and western Iraq.

On the frontline south of Mosul, thick black smoke lingered from oil wells in the region of Qayyara that IS torched to evade air surveillance.

The army and the US-led coalition took back this region in August and are using its air base as a hub to support the offensive on Mosul.

"Long live Iraq, death to Daesh," was painted on a wall near an army checkpoint there, referring to an Arabic acronym for IS. Army Humvees at the checkpoint carried Shia flags, revealing that the soldiers of this unit belonged to Iraq's majority community.

Flying Shia flags in the predominantly Sunni region and the participation of the Popular Mobilization Force, a coalition of mostly Iranian-trained militias, in a support role to the army has raised concerns of sectarian violence and revenge killings during or after the battle.

"All those who are participating in the battle have to respect the humanitarian principles and refrain from seeking vengeance," said a sermon delivered in Sistani's name in the holy Shia city of Kerbala by one of his representatives.

Iraqi security forces have killed 48 of the gunmen who stormed parts of Kirkuk in a shock attack claimed by the Islamic State group, the city's police chief said.

"Forty-eight Daesh (IS) terrorists have been killed in the clashes," Brigadier General Khattab Omar Aref told AFP, adding that some of them blew themselves up when the security forces cornered them. 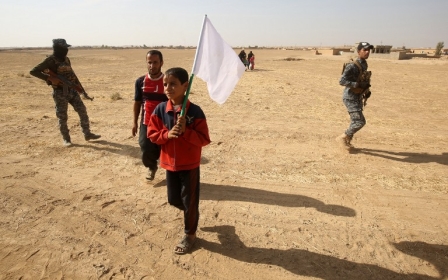 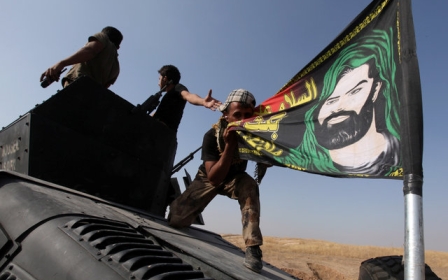 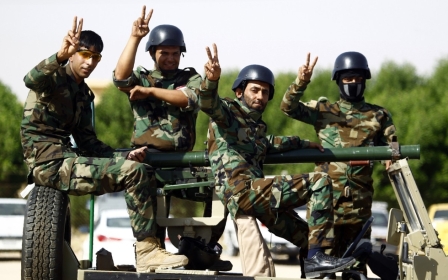 Iraq at War
Battle of Mosul: Iraq's militias 'not seeking revenge' despite fear of abuses