Israel has deported all but one of a group of women activists who tried to break its decade-long blockade of the Gaza Strip by boat, the interior ministry said Friday.

Thirteen women, including Nobel Peace Prize winner Mairead Maguire of Northern Ireland, were detained on Wednesday after their sailboat the Zaytouna was stopped about 35 nautical miles off the coast of Gaza in international waters.

The boat was diverted to the Israeli port of Ashdod, about 30km north of the Palestinian territory, and the women held in custody before being deported.

"All the boat's passengers have left Israel except a woman who will fly to Oslo this afternoon," interior ministry spokeswoman Sabin Haddad told AFP.

Dubbed "Women's Boat to Gaza", the boat was part of the wider Freedom Flotilla Coalition consisting of pro-Palestinian activists who regularly defy Israel's blockade of Gaza.

A statement from the group said the Zaytouna-Oliva was surrounded by two warships along with four to five smaller naval boats as it neared Gaza on Wednesday.

"The IDF (Israeli army) gave warning to the Zaytouna-Oliva to stop their course towards Gaza. When the warning was refused, at least seven members, both male and female, boarded the Zaytouna and commandeered the sailboat. This happened in international waters."

Wendy Goldsmith, a member of the land team working on behalf of the women, stated: “The deportation was much quicker than in prior flotillas. While we had a great legal team assisting the women, we suspect that the reason for the quick release was because of all the negative media attention Israel has been receiving for its illegal interception.

"In the course of their capture, the women persisted in telling the IDF that Israel’s interception of their boat was illegal and that they were being taken against their will to Israel."

"The campaign also asserts that the term 'peaceful' which has been used in some media to describe the capture is incorrect. Peace is more than merely the absence of physical violence.

"Oppression, occupation, denial of human rights and taking a boat filled with non-violent women against their will are not peaceful activities. The Women’s Boat to Gaza and the Freedom Flotilla Coalition will continue to sail until Palestine is free."

An operation in 2010 turned to bloodshed when Israeli commandos killed 10 Turkish activists in a raid on a flotilla, leading to a six-year break in diplomatic ties between Israel and Turkey.

Israel and Palestinian militants in Gaza have fought three wars since 2008.

Israel maintains a blockade on Gaza to keep material it believes could be used for military purposes from entering the coastal enclave.

UN officials have called for the blockade to be lifted, saying as a result conditions are deteriorating in impoverished Gaza. 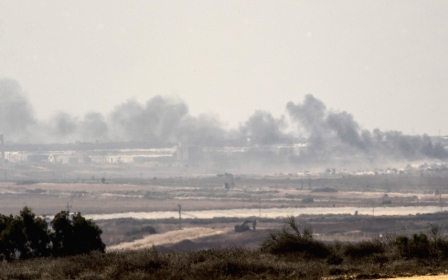