Some 50,000 Gazans earn their living from the fishing business "Israeli naval forces detained 12 Palestinian fishermen as they did their work off the coast of the Gaza Strip,"  Nizar Ayyash, the head of Gaza's Palestinian Fishermen's Union, told The Anadolu Agency.

According to Ayyash, the Israeli navy had claimed that the Palestinian boats had gone beyond the six nautical miles specified for fishing activities off the coast of Gaza.

He noted that the navy had seized five of their fishing boats as well.

He added that the navy routinely shoots at Palestinian fishing boats under the pretext that they went beyond fishing space specified for them, noting that Israeli attacks sabotaged the business of Palestinian fishermen.

In late August, Israel allowed Palestinian fishermen to ply their trade up to six nautical miles off the coast of the Gaza Strip – as opposed to three miles previously.

A cease-fire reached between Israel and Palestinian factions on August 26 ended 51 days of relentless Israeli attacks on the Gaza Strip – attacks that killed over 2,160 Palestinians – and also increased fishing space for Gaza's fishermen off the Gaza coast.

According to Ayyash, some 50,000 Gazans earn their living from the fishing business.

He estimated their combined losses during Israel's recent war at more than $6 million.

Ever since Hamas – which Israel deems a "terrorist" organization – won the 2006 legislative polls, Israel has imposed a tight land and sea blockade on the Gaza Strip.

Meanwhile, two Palestinians in the northern Gaza Strip were injured on Friday by Israeli gunfire near the coastal enclave's border with the self-proclaimed Jewish state.

"Two Palestinians in their 20s were struck in the feet by Israeli gunfire," Palestinian Health Ministry spokesman Ashraf al-Qodra told The Anadolu Agency.

The two youths were rushed to the Kamal Adwan Hospital in the Gaza Strip's northern city of Beit Lahia, he said.

The Israeli army has yet to comment on the incident.

On Thursday, Israeli army forces fired into agricultural land located in the heart of the Gaza Strip, eyewitnesses have said.

Israeli forces stationed on the border with the blockaded coastal enclave fired machineguns in the direction of the Gaza Strip's Al-Bareej refugee camp, eyewitnesses told The Anadolu Agency.

The Israeli army, for its part, has yet to comment on the reported incident.

Gaza is trying to recover after Israel’s summer offensive, amid small aid efforts that filter through the Israeli blockade.

A Turkish charity said on Tuesday that they have provided aid to around 3,500 families in Gaza.

The charity has helped 3,500 families by sending propane cylinders, heaters, blankets and winter clothes to those in need, the Gaza Representative of the Humanitarian Relief Foundation, Mehmet Kaya, said in a statement.

But rights activists say such small-scale measures are not enough. 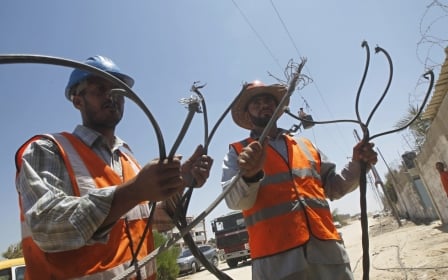