Residential houses are pictured in the Maale Adumim settlement in the West Bank, east of Jerusalem, on 1 July 2020 (AFP)
By
MEE staff
in
Washington

More than two dozen House Democrats on Monday sent a letter to US Secretary of State Antony Blinken urging Washington to pressure the Israeli government to prevent settlement construction in the E1 area between Jerusalem and the West Bank.

The 26 lawmakers, led by Congressman Mark Pocan who recently visited Israel and the occupied West Bank, described the plans as "doomsday settlements" that would both violate international law and also further diminish the prospects of a two-state solution with a viable Palestinian state.

"The recent efforts by the Israeli Government to advance the approval to build 3,400 housing units in the highly sensitive area known as E-1 pose an irreconcilable challenge to a lasting peace solution between Israel and the Palestinians," the letter said.

"To ensure the prospects of peace, we urge the State Department to exert diplomatic pressure to prevent settlement construction in E-1."

I led 25 of my colleagues in sending @SecBlinken a letter outlining our concerns with the Israeli Government’s efforts to advance settlements in the E-1 area near Jerusalem in the West Bank. Read more: pic.twitter.com/c36fp3TEmK

While US administrations prior to Donald Trump have held that Israeli settlements in the occupied West Bank are not consistent with international law, the lawmakers noted there was a 28 percent increase in settlement construction during the Trump presidency.

The area of E1, east of Jerusalem, has long been considered a red line for previous US administrations and a point of no return for a potential two-state solution.

The plans for construction there involve building housing units to link the settlements of Kfar Adumim and Maale Adumim in the Israeli-controlled Area C of the West Bank with East Jerusalem.

If fully implemented, critics say the E1 plan would effectively split the West Bank in half, isolate East Jerusalem from Palestinian communities in the West Bank and force Palestinians to make even lengthier detours to travel from one place to another, while illegal settlements would be able to expand.

The lawmakers referred to the area as "a vital corridor to Palestinian life" and requested an update on the State Department's efforts to discourage E1 settlement advancement by mid-December.

Last month, the Biden administration gave its strongest public rebuke of Israel's settlement policy, with the State Department saying it "strongly oppose[s] the expansion of settlements", referring to plans to advance more than 3,000 homes for settlers in the occupied West Bank.

Despite this opposition, Israel has continued to advance its plans with Defence Minister Benny Gantz, saying it was advancing a "balanced" construction plan and it was not promoting all the construction plans on the table. Construction of settlements accelerated in the past few years under former Israeli prime minister Benjamin Netanyahu.

Israeli Prime Minister Naftali Bennett, the former head of a settler lobby group, has vowed that his government would back settlements and is an advocate of annexing the Jordan Valley and large chunks of the West Bank.

About 475,000 Israelis live in settlements in the West Bank, which are illegal under international law, on land Palestinians claim as part of their future state. 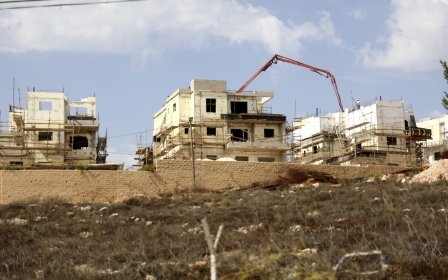