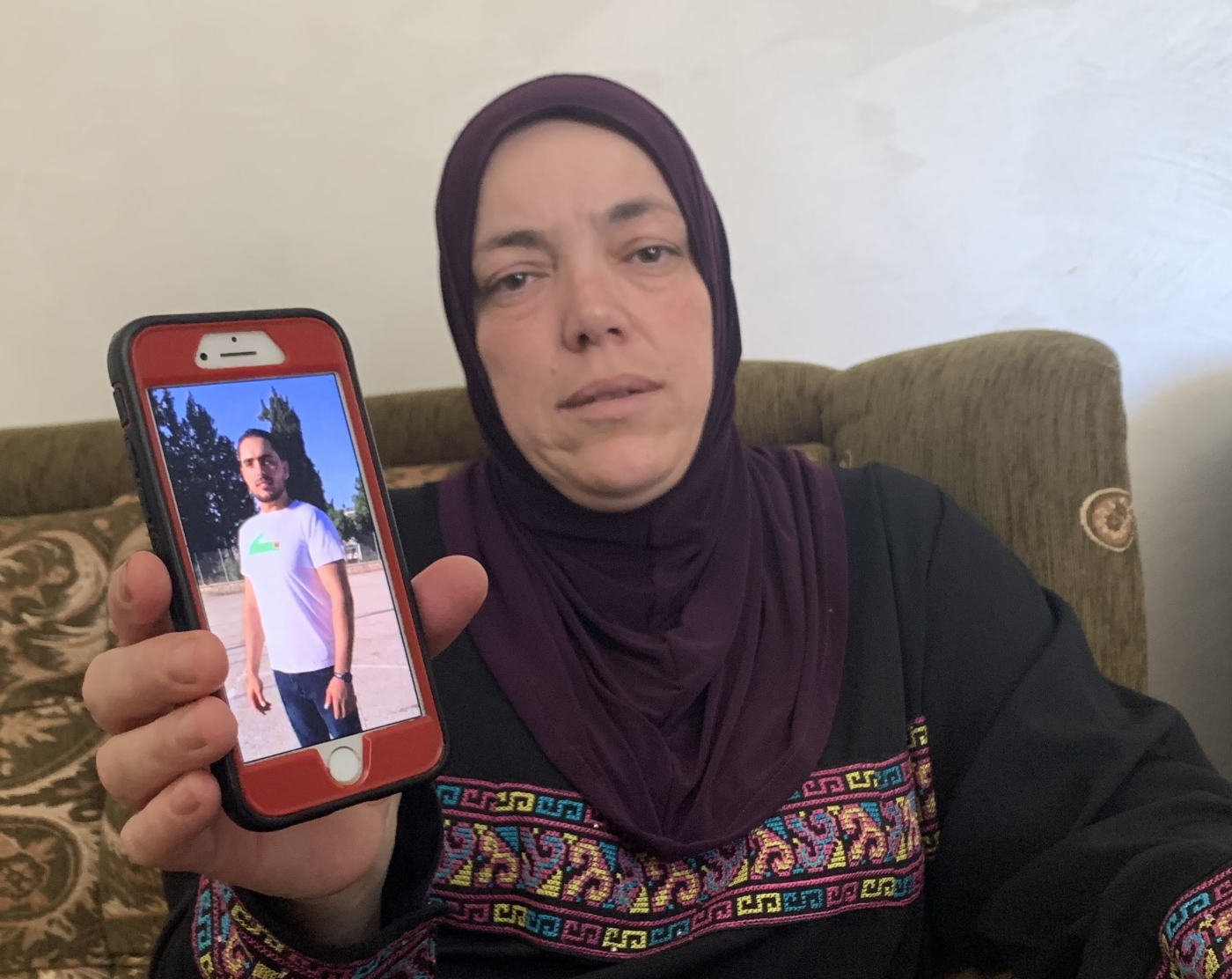 Shahla is the mother of Palestinian hunger striker Mujahed Hamed, who is being held under Israeli administrative detention (MEE/Shatha Hammad)
By
Shatha Hammad
in
Ramallah, occupied West Bank

“I fear that my child will grow up while I’m away in prison,” Mujahed Hamed, a Palestinian detained in one of Israel's prisons in the Negev region, wrote in a letter to his family.

Hamed is among 540 Palestinian prisoners held in Israeli prisons under its contested policy of administrative detention, under which Israel detains individuals - overwhelmingly Palestinians - without trial or charges for renewable periods of up to six months.

The controversial policy imposes no obligation on the Israeli government to present any official suspicions or evidence to justify an arrest or detention. For Hamed, his ordeal began on 21 September 2020, when the Israeli military stormed his family home. He had already spent nine years in Israeli prisons between 2010 and 2019 and was surprised by the latest raid, his mother Shahla told Middle East Eye.

At the time, Hamed thought his detention would not last more than a few hours, but he has been held ever since for the past 10 months.

When his detention was extended for the third time, Hamed told his loved ones that he would stage a hunger strike in protest.

Hamed is not alone in his endeavour. Fifteen other Palestinian prisoners have recently announced that they would go on hunger strike to denounce their administrative detention, demanding that Israel prescribe a time limit and prevent any future extension of their imprisonment.

'I want to see my child grow up'

Hamed’s mother described him as a responsible man who was trying to “lead an ordinary, quiet life”.

"After Mujahed was released from prison the first time, he told me about the dire conditions he had to endure there. He said he did not want to go back to prison again and would not be detained once more,” Shahla said.

He got married, had a child, and worked long hours in order to support his family.

The first-time father named his son, born just two months prior to his detention, Mohammad.

'I cannot eat while my son is on hunger strike. I try to experience his pain'

It’s now been nearly a year since the father and son have seen each other. Due to Covid-19 restrictions, Hamed has not been able to interact with his child while in administrative detention.

“[Hamed] is going on hunger strike by his own choice. He wrote to us that he wants to see his child grow up and learn things. He needs to teach his child how to walk and eat,” Shahla said.

“He is afraid that he will be deprived of experiencing these small moments of life.”

Shahla knows her son is determined not to end his hunger strike until Israeli authorities respond to his demands. However, she is also worried about his wellbeing, as Hamed has high blood pressure and a fragile immune system after having spent years in prison.

She fears his health may decline rapidly during the hunger strike and is doing her best to ensure that he’s not fighting alone.

“I refrain from eating for long hours because I cannot eat while my son is on hunger strike. I try to experience his pain,” said Shahla, who has diabetes and hypertension.

“A huge injustice has been done to Mujahed, who did not commit anything that warranted imprisonment, and with all these months without a trial or charges put against him.

“This is why he went on strike and announced that he would not reverse his decision."

Since Hamed announced his hunger strike, Israeli prison authorities have taken away his right to call his family or see a lawyer, leaving his loved ones in the dark about his condition.

Palestinian prisoners, particularly those held under administrative detention orders, often resort to hunger strikes to demand the right to due process, instead of the current practice that keeps them in detention for an unlimited period of time over allegations both they and their lawyers are left in the dark about.

According to the Palestinian Prisoners Society (PPS), the number of Palestinians being kept under administrative detention orders currently stands at 540. The 15 hunger strikers alongside Hamed mark an unprecedented number of simultaneous hunger strikes by administrative detainees, with the number of prisoners staging their own protests on the rise.

The latest streak of hunger strikes began with Salem Alzayat, 40.

The Palestinian from Bani Naim, in the southern occupied West Bank, went on hunger strike 17 days ago over the fifth extension of his detention in February.

According to PPS, Alzayat was initially arrested and sentenced to four months in prison for illegally entering Israel. Since then, Israel has extended his detention repeatedly under administrative detention orders.

A couple of days after Alzayat began his hunger strike, Mohammed Emar began one for the same reasons. The 26-year-old from Tulkarem has been detained since October and has had his detention extended three times.

Brothers Mahmoud and Kayed al-Fasfous , 30 and 32 years old respectively, both went on hunger strike two weeks ago to protest their detention since July 2020.

The brothers were joined by Rafat al-Darwish and Guevara al-Namorah, both 28 years old from Dura, who have been imprisoned since October.

Alaa Aldin Khalid Ali, a 38-year-old also from Jalazun, later went on hunger strike after he was arrested in December and his detention was extended twice under administrative detention.

Ali has been in Israeli prisons for about three-and-a-half years, with most of the time spent under administrative detention, according to the PPS.

All of them have had their administrative detention extended more than three times.

Hamed, who comes from Silwan, east of Ramallah, is the latest Palestinian administrative detainee to go on hunger strike.

Nuwarah was arrested in 2001 and sentenced to life in prison during the Second Intifada. The resident of Ramallah announced his hunger strike earlier this week to protest against being transferred to a solitary confinement cell in Ashkelon prison, where he said he was subjected to harsh treatment.

According to the PPS, Nuwarah’s transfer came after an aggressive repression campaign on Monday by Israeli prison forces' special units against 37 Palestinian prisoners in Ashkelon who were suffering from various diseases, some of them chronic and life-threatening.

The PPS claimed that the special units assaulted the prisoners, destroyed their belongings, and violently attacked one of the prisoners.

During the seven-hour-long raid, the Israeli troops inspected and assaulted the prisoners before shackling and tying them in the prison yard, the PPS said.

Namorah, the administrative detainee from Dura, was preparing for his scheduled release from prison when he was told that his detention had been extended for the third time.

The last-minute decision by the Israeli prison services shocked and devastated the Palestinian and his family, who were preparing to celebrate his return after 10 months in detention.

Soon afterwards, Namorah announced that he would go on hunger strike to obtain his freedom. He has been experiencing health problems since starting the strike, his father told MEE.

According to his lawyers. Namorah has lost five kilogrammes, suffers from severe headaches, body aches and exhaustion, and struggles to move.

Namorah told his lawyers that Israeli prison services have sought to pressure him to end his strike in exchange for medical treatment - offers he has rejected.

"Today, we live in the midst of the unknown. We do not know when Guevara might be released, why he is imprisoned," Guevara's father told MEE, describing the administrative detention as an “unjust and illegal” practice that deprives the prisoner of his basic right to self-defence in a legal court.

"There are many other questions we do not have answers for, although these are simple and ordinary questions related to our basic human rights,” he added.

Namorah's wife recently gave birth to a baby girl, Julia, who he has yet to meet.

“This is precisely why he went on strike. It is an attempt to win back his freedom so he can return to his baby," said his father. 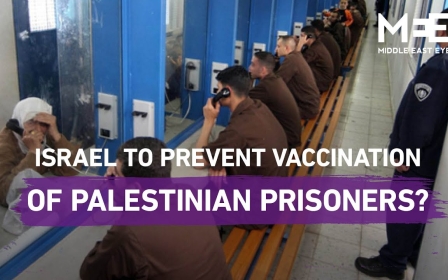 Occupation
'A victory for prisoners': Palestinian released from Israeli prison after 65 days of hunger strike 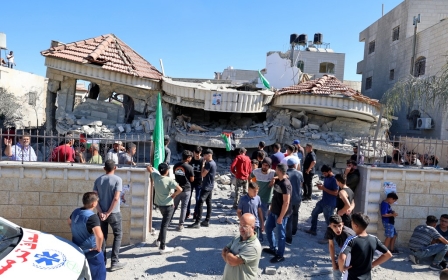