A 17-year-old Palestinian was shot dead on Tuesday by Israeli forces in the city of Hebron during mass West Bank protests against the killing of three resistance fighters in Nablus earlier in the day.

The Palestinian ministry of health said Moamen Yasin Jaber arrived at the Ahli Hospital in Hebron with severe wounds after being shot with an expanding dumdum bullet in the heart.

He succumbed to his wounds while doctors attempted to rescue his life, Wafa news agency reported.

At least four people sustained gunshot wounds, one in Hebron and three in al-Bireh, near Ramallah, according to the Palestinian news website Arab48.

The casualty in Hebron, who remained unidentified, was hit in an artery in their thigh and was admitted to the operating room, the health ministry said.

Palestinians were called out to protest the killing of Ibrahim al-Nabulsi, Islam Sabouh, and Hussein Jamal in Nablus in the morning.

The death of Nabulsi in particular, who is one of the most prominent resistance figures in Nablus, triggered a wave of fury throughout the West Bank.

Several Palestinians were also injured in the Silwan neighbourhood in occupied East Jerusalem on Tuesday after Israeli forces fired rubber bullets and tear gas canisters at them during a raid.

'The Israeli government is not interested in achieving calm and stability'

Nabil Abu Rudeineh, the spokesman for Palestinian Authority President Mahmoud Abbas, said earlier that Israel is pushing closer to an "open confrontation" with the entire Palestinian people through its "all-out aggression that began in Jerusalem and then spread to Jenin, Gaza, and today in Nablus," according to the official news agency Wafa.

He warned that if the "Israeli aggressions" continue, it will "ignite the region and will cause devastation that no one can bear the serious consequences of".​

"The Israeli government is not interested in achieving calm and stability, and is working to shed Palestinian blood and exploit it to achieve gains in Israeli internal politics." 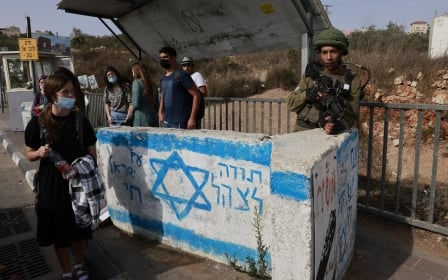