Israel-Palestine: Beatings, arrests and chants of 'Death to Arabs' at far-right march in Jerusalem's Old City 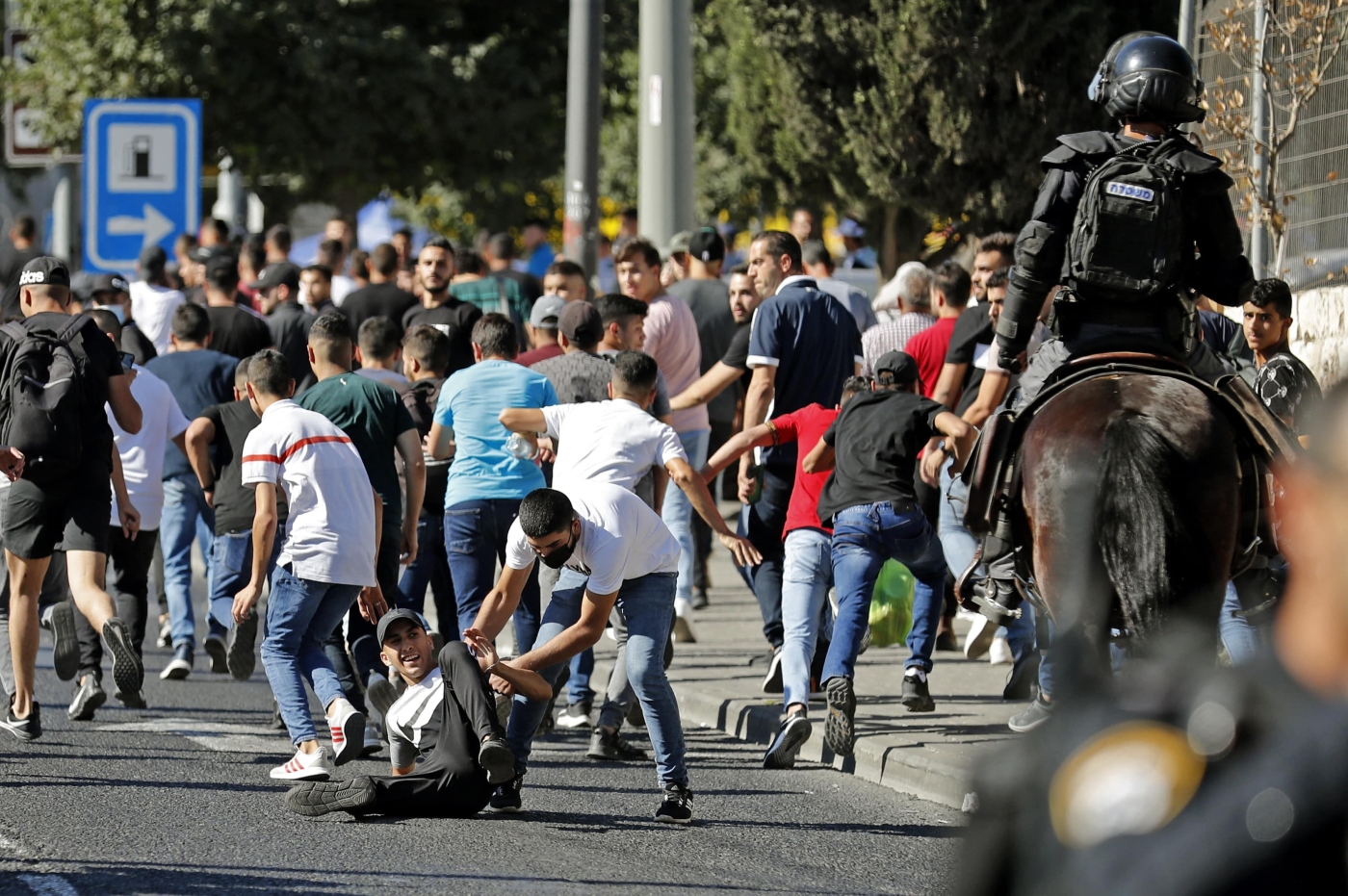 By
Shady Giorgio
in
Jerusalem

Israeli police beat and arrested Palestinians on Tuesday, after closing Damascus Gate to make way for Israelis gathering for the start of a provocative nationalist march through occupied East Jerusalem's Old City.

The so-called Flag March was held on Tuesday after being cancelled during a period when repeated Israeli crackdowns in al-Aqsa Mosque and the threatened expulsion of Palestinian families was causing uproar in Jerusalem. 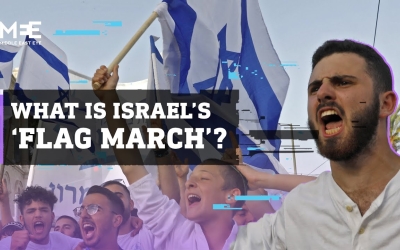 Having closed off certain roads and Damascus Gate, Israeli police arrested Palestinians in Jerusalem ahead of the march. Videos posted on Twitter showed Israeli officers beating a Palestinian on the steps by Damascus Gate.

The Red Crescent said 27 people were wounded during confrontations with Israeli authorities around the Old City, including three from rubber-coated steel bullets, one from being beaten and one who had been hit by part of a sound grenade. Two people were hospitalised.

Authorities beat vendors working in shops near Damascus Gate, and pushed them away from the Old City. The area around the gate was sealed off by early afternoon on Tuesday, except for members of the press, with several barricades set up to clear the way for the settlers' march.

Chants of 'Death to Arabs'

More than a thousand Israelis waving national flags gathered at the basin of Damascus Gate at the start of the march, singing anthems of the settler movement.

Some hoisted far-right lawmaker and Benjamin Netanyahu ally Itamar Ben-Gvir, and Bezalel Smotrich, leader of the far-right Religious Zionism faction, on their shoulders.

Israeli authorities raised the alert level in the country ahead of the march, with additional police and military forces set to be deployed near the besieged Gaza Strip and in towns in Israel with mixed populations of Jewish and Palestinian citizens.

By Tuesday afternoon, a small number of incendiary balloons had been sent from Gaza into Israel, with 20 fires reported along the Gaza border.

Israeli authorities also diverted flights towards the "Northern Route" in and out of Israel, in anticipation of a possible escalation in Gaza.

The march ran along the Old City's wall from Damascus Gate to Jaffa Gate, before heading towards the Western Wall.

Palestinian counter-protests took place in Jerusalem and in towns in Israel with significant numbers of Palestinians, with some Palestinian groups calling for a "day of rage" denouncing the far-right march.

The Flag March is usually held on the occasion of Jerusalem Day, which marks Israel’s capture and subsequent occupation of East Jerusalem in the 1967 Middle East war.

The march typically brings together thousands of young, far-right religious Israelis, who chant anti-Palestinian slogans and wave Israeli flags as they pass through the small streets of East Jerusalem's Old City.

Initially scheduled for 10 May, the route of the Flag March had been diverted away from the flashpoint of Damascus Gate amid Palestinian protests against the planned forcible removal of Palestinians from the Sheikh Jarrah neighbourhood, and Israeli forces' violent raids at al-Aqsa Mosque.

The march was called off that day, as sirens went off after Hamas fired four rockets from Gaza towards Jerusalem when Israel ignored its ultimatum calling on Israeli forces to withdraw from al-Aqsa.

Over the following 11 days, Israeli forces and Hamas engaged in a war that would leave 248 people in Gaza dead and 13 in Israel.

The procession was later rescheduled for 10 June, but once again postponed after Hamas warned of renewed hostilities should it proceed.

The new date for the march was set on 8 June by the cabinet of then-Prime Minister Benjamin Netanyahu, who was voted out by Israel’s parliament on Sunday after 12 years as premier.

The Flag March will be the first test for Bennett’s fragile coalition government, cobbled together by the secular centrist Yair Lapid, a former TV presenter, and including eight parties, ranging from Bennett's far-right Yamina Party to left-wing Labor and an Islamist party representing Palestinian citizens of Israel.

While Bennett is a prominent member of Israel’s far-right, Netanyahu has labelled the new cabinet as a "dangerous" “left-wing” government, and accused it of being "the greatest election fraud in the history" of Israel.

'A provocation against our people'

Jewish supremacists, including Israeli MP Itamar Ben-Gvir, have meanwhile vowed to participate in the march regardless of what the new government - or Palestinians - might say.

"I will arrive today to participate in the flag parade and I will fly the Israeli flag," he wrote on Twitter on Tuesday morning." We do not need permission from Hamas or the Islamic Jihad to march in the capital of Israel." 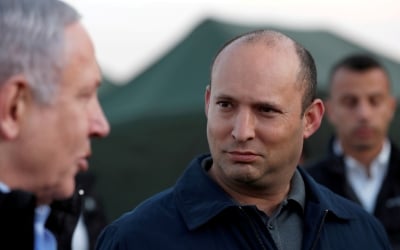 Palestinian Authority Prime Minister Mohammad Shtayyeh condemned the march as "a provocation and aggression against our people, Jerusalem and its sanctities that must end".

"We warn of the dangerous repercussions that may result from the occupying power's intention to allow extremist Israeli settlers to carry out the Flag March in occupied Jerusalem tomorrow," Shtayyeh tweeted on Monday.

In April, Israeli settlers had already marched in the streets of Jerusalem’s Old City chanting "Death to Arabs," sparking clashes between Palestinians and Israeli military police, who barred the former from sitting in the Damascus Gate plaza.

UN Middle East peace envoy Tor Wennesland called on "all relevant parties to act responsibly and avoid any provocations that could lead to another round of confrontation." 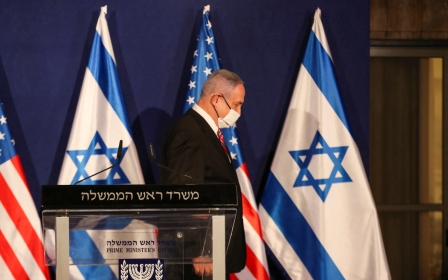 Inside Israel
The more things change: Israel's new government may mean more of the same 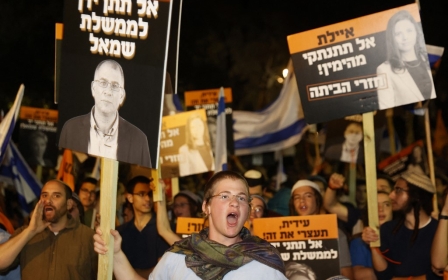