Meanwhile, President Reuven Rivlin is preparing to leave office, and an army commander collapses and dies during training A view of the embassy of the Republic of Serbia in Israel's Mediterranean coastal city of Tel Aviv, 5 September 2020 (AFP)
By
Mustafa Abu Sneineh

Serbian President Aleksandar Vucic revealed on Thursday that his country's position on moving its Israeli embassy from Tel Aviv to Jerusalem was "uncertain".

He explained that Serbia's interests have changed since Israel recognised Kosovo, which Serbia does not recognise as an independent state.

Kosovo agreed to recognise Israel in September, while Serbia, which already has ties with Israel, said it would move its embassy from Tel Aviv to Jerusalem, Walla news reported at the time. Israel in the Balkans: Why did Serbia and Kosovo sign up to Trump's deal?
Read More »

The move was part of a comprehensive diplomatic drive by the US administration of former president Donald Trump to broker normalising deals between Israel and Arab and Muslim countries, including the United Arab Emirates, Bahrain, Sudan and Morocco.

Serbia had agreed to relocate its embassy from Tel Aviv to Jerusalem, which Trump's administration unilaterally recognised as Israel's capital in December 2017.

According to Balkan Insight, a news website, Vucic told media that although Israel recognised Kosovo, his country is still in talks with the US and European Union.

Vucic said that Serbian interests have changed since Israel recognised Kosovo in March and that his country will make a decision regarding the relocation of Belgrade's embassy, "in accordance with international law, but also with the interests of Serbia... respecting friendship with Israel, but also respecting ourselves".

Speaking on Thursday, the date Serbia was due to move its embassy to Jerusalem - according to the US-brokered deal - Vucic was uncertain about his country's commitment to the relocation.

Kosovo opened its embassy in Jerusalem in March, after Israel recognised the Muslim majority country in the Balkans.

Only three countries have relocated their embassy to Jerusalem, including the United States, Guatemala and Kosovo. If Serbia follows suit, it will become the first EU member state to do so.

The US State Department said in a statement that it hoped Serbia and Kosovo will continue to "act in good faith and continue to adhere to the commitments made in Washington".

Israel’s 10th president, Reuven Rivlin, is due to leave his position on 7 July. He will be succeeded by Isaac Herzog.

Rivlin, 81, has served as president for seven years. He pushed hard for Benjamin Netanyahu and Benny Gantz, two political rivals, to sit and form a unity government in April 2020, to tackle the spread of Covid-19 and the economic crisis that followed. During his tenure, he had to deal with four national elections in two years, starting in March 2019 with the latest in March of this year, held as former prime minister Benjamin Netanyahu faced corruption charges of fraud, bribery and breach of trust while in office.

Verter wrote that ties between Rivlin and Netanyahu, whose tenures overlapped, were “shaky and sour from the very first”.

In 2018, Rivlin objected to the nation-state law that enshrined Jewish supremacy in Israel, removing Arabic as an official language of the state, and leaving Palestinian citizens of Israel as second-class citizens.

“I think that the nation-state law in its current version is bad for the state of Israel and bad for the Jews,” Rivlin said at the time.

A senior commander in the Israeli army, Sharon Asman, died on Thursday after he collapsed during military drills at the Kfar Yona army base in central Israel, Ynet reported.

Asman, 43, was appointed this week as the new commander of the Israeli infantry brigade Nahal. Hebrew media said that Asman was running during training when he collapsed and received medical treatment before being pronounced dead of heart failure.

Asman had served from 1997 as part of Nahal, an active infantry brigade in the occupied West Bank. He also fought in the Israeli wars on Lebanon in 2006 and Gaza in 2014.

Yisrael Shomer, Nahal’s former chief commander, will take up the post until a new brigade commander is appointed. 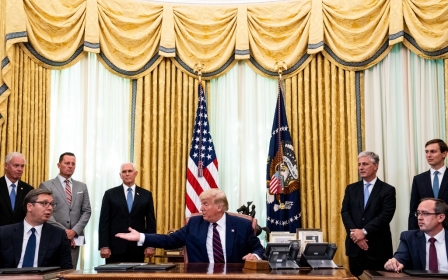 Politics
Israel in the Balkans: Why did Serbia and Kosovo sign up to Trump's deal?
Vuk Vuksanovic 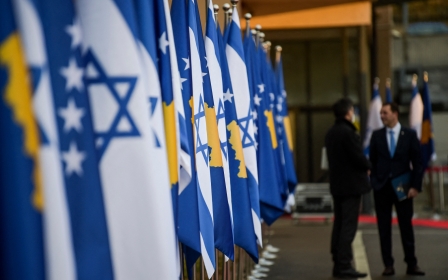 Occupation
'All he wants is freedom': Family's agony as Palestinian continues hunger strike