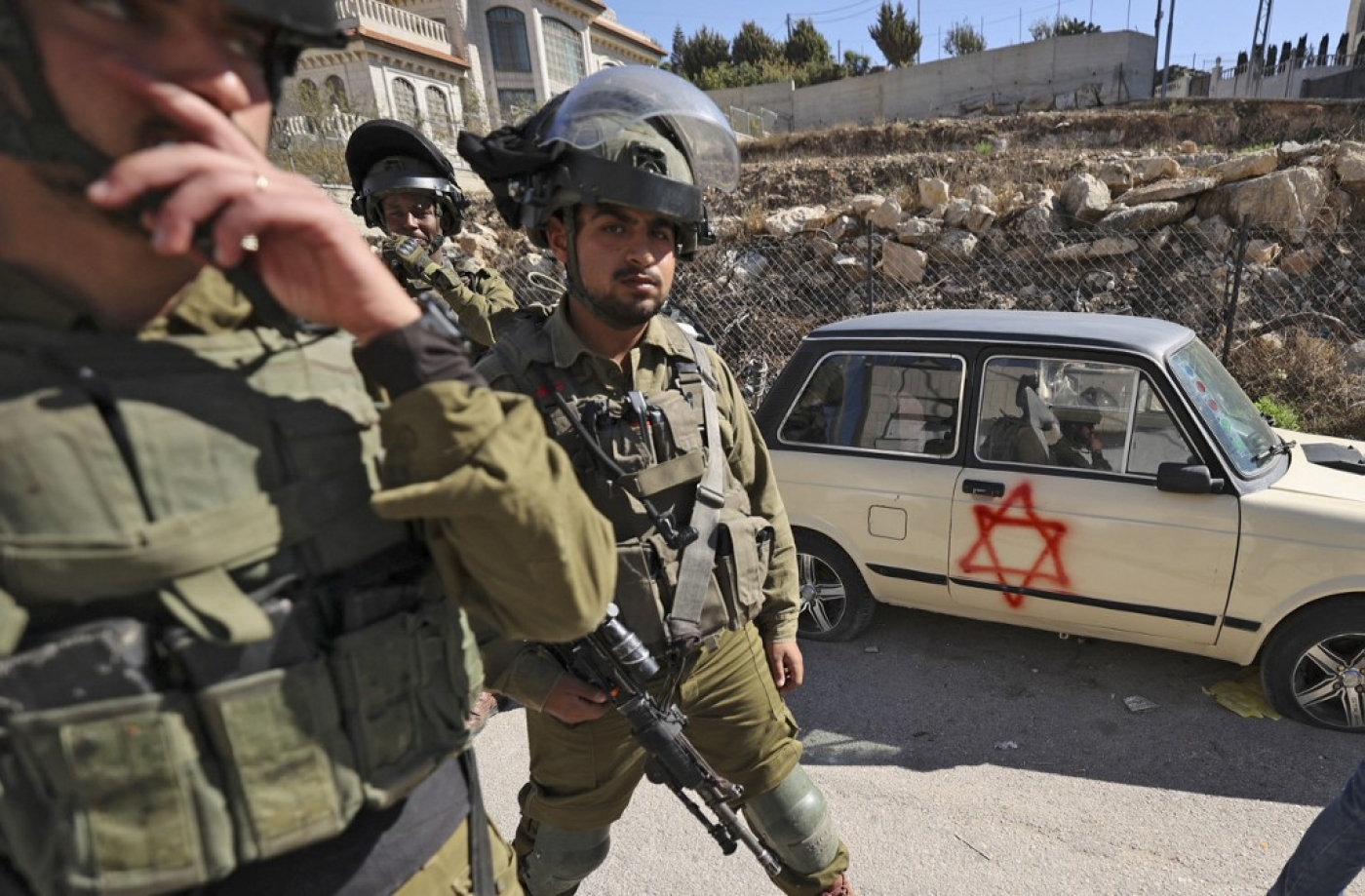 Israeli soldiers stand near a Palestinian vehicle defaced with Star of David graffiti, believed to be vandalised by Israeli settlers, in al-Bireh in the occupied West Bank on 9 November (AFP/File photo)
By
MEE staff

The Israeli government has been using settler violence as "a major informal tool" to take over Palestinian land in the occupied West Bank, a leading Israeli rights group has found.

B'Tselem, in a report released on Sunday, said that Israel uses two main methods to confiscate Palestinian land in the West Bank: official annexation via its judicial system and unofficial acts of intimidation and violence carried out by its settler population.

'Sometimes, soldiers actively participate in the settler attacks or look on from the sidelines'

"The state fully supports and assists these acts of violence, and its agents sometimes participate in them directly," the Israeli rights group said in its report.

"As such, settler violence is a form of government policy, aided and abetted by official state authorities with their active participation."

According to the report, Israeli settlers have taken over 11 square miles of farm and pasture land in the occupied West Bank during the past five years.

'They broke my leg'

One of the case studies documented an illegal outpost known as Ma’on Farm, which was erected illegally in the southern West Bank and consists of about one square mile of land. Settler have harassed, beaten and otherwise intimidated the Palestinians that have historically used the land for pasture and farming, resulting in confiscation.

Jummah Ribii, a 48-year-old shepherd from al-Tuwani village, told B’Tselem that settlers had been for years working to push his family off the farming that sustains them. In 2018, settlers attacked and beat Ribii, leaving him with severe injuries.

"They broke my leg, and I had to spend two weeks in hospital and continue treatment at home," he told the rights group. "I had to sell most of our sheep to cover the cost of treatment."

According to B'Tselem, Israel legitimises settler violence both by legalising their informal land grabs and by failing to even attempt to prevent or prosecute such violence. 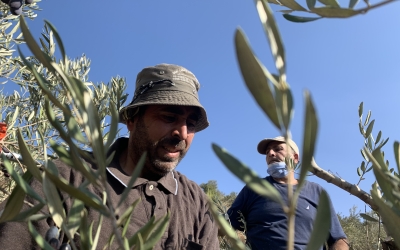 "The military avoids confronting violent settlers as a matter of policy, although soldiers have the authority and duty to detain and arrest them.  As a rule, the military prefers to remove Palestinians from their own farmland or pastureland rather than confront settlers, using various tactics such as issuing closed military zone orders that apply to Palestinians only, or firing tear gas, stun grenades, rubber-coated metal bullets and even live rounds," B'Tselem found.

"Sometimes, soldiers actively participate in the settler attacks or look on from the sidelines," it continued.

Moayyad Besharat, Programs and Project Manager at the Union of Agricultural Work Committees, told MEE that settler attacks against Palestinians have increased this year, particularly during the olive harvest season, which runs between October and November.

The olive harvest is a lifeline for some 80,000 to 100,000 Palestinian families in the occupied West Bank. This year's season has been the hardest in recent memory, according to Besharat, who accompanies farmers during harvest as an observer.

Echoing B'Tselem's report, Besharat underlined the difficulty Palestinians face in attempting to combat settler attacks and land grabs, given the frequency in which the settlers are accompanied by army escorts.

'It is state violence'

While Palestinians regularly, document and report settler attacks - both legally and via tools such as books, research reports and documentaries - the Israeli government almost never takes legal action against settlers, B'Tselem's report said.

"Israel’s inaction continues after settler attacks on Palestinians have taken place, with enforcement authorities doing their utmost to avoid responding to these incidents," the group wrote.

'When the violence occurs with permission from the Israeli authorities... it is state violence'

"Complaints are difficult to file, and in the very few cases in which investigations are in fact opened, the system quickly whitewashes them. Indictments are hardly ever filed against settlers who harm Palestinians and when they do, usually cite minor offenses, with token penalties to match in the rare instance of a conviction."

In all, the lack of government action has translated into de facto approval, the group found.

"State violence – official and otherwise – is part and parcel of Israel’s apartheid regime, which aims to create a Jewish-only space between the Jordan River and the Mediterranean Sea," it said.

"The combination of state violence and nominally unofficial violence allows Israel to have it both ways: maintain plausible deniability and blame the violence on settlers rather than on the military, the courts or the Civil Administration while advancing Palestinian dispossession. The facts, however, blow plausible deniability out of the water: When the violence occurs with permission and assistance from the Israeli authorities and under its auspices, it is state violence. The settlers are not defying the state; they are doing its bidding." 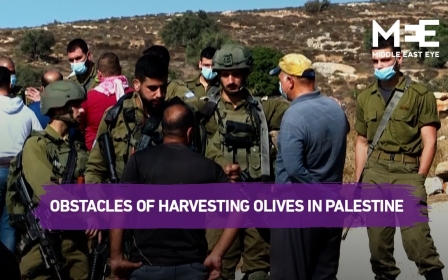 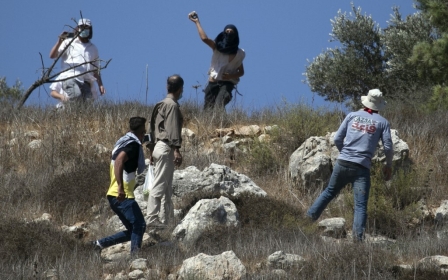 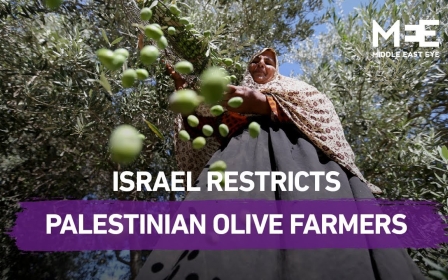 Occupation
Palestinians struggle to harvest olives due to Israeli restrictions