Palestinians, aged 14 and 17, killed as Israel cracks down on latest Great March of Return demonstration Palestinian protesters carry away a man injured during a demonstration along the frontier with Israel, east of Bureij in the central Gaza Strip (AFP)
By
MEE and agencies

Earlier Ali al-Ashqar, 17, was shot in the neck by Israeli fire near the fence east of Jabalia in northern Gaza, a health ministry spokesman told the AFP news agency.

Seventy other people were wounded, 38 of them by live fire, medical officials said. 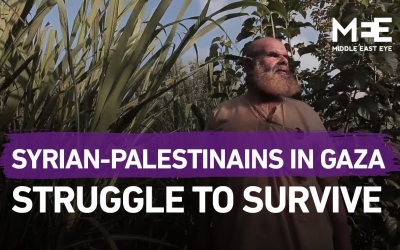 An Israeli military spokesman said 6,000 Palestinians demonstrated at several points along the fence, and claimed some hurled explosive devices and firebombs.

The spokesman said some briefly managed to cross the fence before returning to Gaza. The spokesman did not comment on the deaths.

Palestinians have been staging weekly protests along Gaza's frontier with Israel for the past 18 months, in a wave of demonstrations known as the Great March of Return.

The protesters have been calling for Israel's siege of the coastal enclave to be lifted and the right of return for Palestinians to their ancestral homes in Israel that their families were expelled from in 1948.

Israeli forces have violently cracked down on the overwhelmingly peaceful protests, using live fire and tear gas in an attempt to disperse the demonstrators and push them back from the frontier.

At least 210 Palestinians have been killed by Israeli forces since the protests began in March 2018, according to local medical officials. One Israeli soldier was shot dead by a Palestinian sniper and another killed in a botched raid in the time since protests began.