A 20-year-old Palestinian man was killed by Israeli security forces in the East Jerusalem town of Silwan on Tuesday evening, after violent clashes erupted at the start of the Jewish holiday of Yom Kippur.

Ali Atef Shyoukhi, a resident of Silwan, was shot with live ammunition and fatally wounded around 11 pm on Tuesday, and succumbed to his injuries shortly after. Witnesses said that police blocked the area, preventing Ali from receiving aid or medical attention.

The violence reportedly began around 10pm when police units forcibly entered and searched the homes of several Silwan families. Residents told Middle East Eye that security forces begun firing tear gas and rubber-coated steel bullets at Palestinian youth who assembled in the neighbourhood to throw rocks and set off fireworks.

The Palestinian Red Crescent was prevented from reaching Shyoukhi by the Israeli security forces, who stopped and repeatedly searched their ambulances for over an hour.

On Wednesday morning, a burned out vehicle and remnants of dumpster fires littered the streets where the violence took place the previous night. About a kilometre away, the Shyoukhi family gathered in their home in the al-Hara al-Wusta neighbourhood to mourn Ali.

Young family members passed out coffee and tea to the hundreds of visitors who had come to pay their respects, while neighbours strung up Palestinian and bright yellow Fatah flags high along the street, sporadically chanting Ali’s name.

Ali’s twin brother, Mohammed, was not in the neighbourhood at the time of the shooting but immediately travelled to Silwan when he heard his brother was dead.

“Once we heard the news that my brother was killed, no one could believe it,” he told MEE, still visibly shaken from the events. “It was so unexpected. I don’t believe what has happened, it’s a shock. I tried to see Ali, but I couldn’t get through.”

The Shyoukhi family decided to hold Ali’s burial immediately after they gained access to his body, some two hours after he had been shot.

“Not everyone got to see him buried,” Yousef Shyoukhi, Ali’s cousin, said on Wednesday morning, explaining that the family feared the body would be detained by Israeli authorities if they did not act quickly. “His mother and father were only able to see him for no more than three minutes before he was buried.”

Yousef said that Ali had spent 15 months in prison along with Yousef’s son in January, after they were arrested for throwing stones. He said Ali was a good student and happy to be back in school after being released.

After a quiet start to the Yom Kippur holiday, which began at sundown on Tuesday, an increased border police presence could be seen in and around the Old City of Jerusalem as the night wore on. The holiday, during which Jews abstain from driving cars or using technological devices, sees West Jerusalem and some of East Jerusalem’s roads closed to traffic. On Tuesday night and into Wednesday, the main highway through East Jerusalem towards the West Bank was also blockaded.

“In Silwan, Arabs rioted by throwing petrol bombs and rocks at officers who responded to a dangerous and life threatening (situation),” the statement continued. “One resident was injured critically and died. (He was) Buried overnight by local residents.”

“In the Old City, security went a according to plans, thousands of people visited the western wall. No incidents occurred,” the statement said.

Following a deadly shooting attack carried out by a Palestinian gunman in the East Jerusalem neighbourhood of Sheikh Jarrah on Sunday, Rosenfeld stated that over 3,500 police officers were deployed in Jerusalem to take part in increased security measures surrounding Yom Kippur and the Jewish festivals, including counterterrorism, special patrol, and undercover units.

The gunman, 39-year-old Misbah Abu Sbeih, a resident of Silwan, shot and killed a 60 year-old woman and 29 year-old police officer during a shooting spree through the East Jerusalem neighbourhood of Sheikh Jarrar. He was killed by Israeli police on the scene, but the incident resulted in a tense atmosphere in and around the city.

Rosenfeld did not respond to further requests for comment regarding the events that took place in Silwan on Tuesday evening.

Yousef Shyoukhi told MEE that the fact that the gunman was from Silwan resulted in the increased police presence around their neighbourhood.

“They put more police here, especially after the shooting that happened three days ago,” he said. “It always happens this way, more and more kids get arrested, and there is more and more police.”

Northwest of Silwan, in the Christian quarter of Jerusalem’s Old City, shopkeeper Ibrahim Antour, also felt an increase in tension after the shooting occurred, and witnessed an increase in the numbers of young Arab men being searched by police in the days leading up to the holiday.

“It is much more intense in the Old City,” he told MEE. “The police treat us as if we did it – one Muslim guy, one Arab guy, one Palestinian guy does something wrong, and they treat all Palestinians the same, because of one guy. This is totally wrong.”

Antour, who lives in the East Jerusalem neighbourhood of Beit Hanina, closed his shop three hours early on Tuesday evening so that he would be able to travel home due to the road closures. 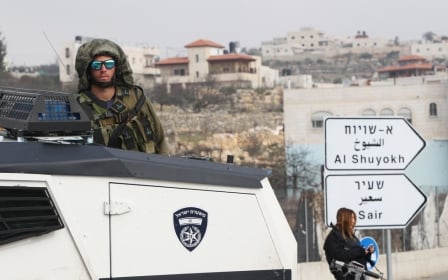