Meanwhile, Israeli settlers vandalise vehicles and spray racist graffiti in Palestinian village of Yatma, and the army's budget is in limbo without a government to approve it 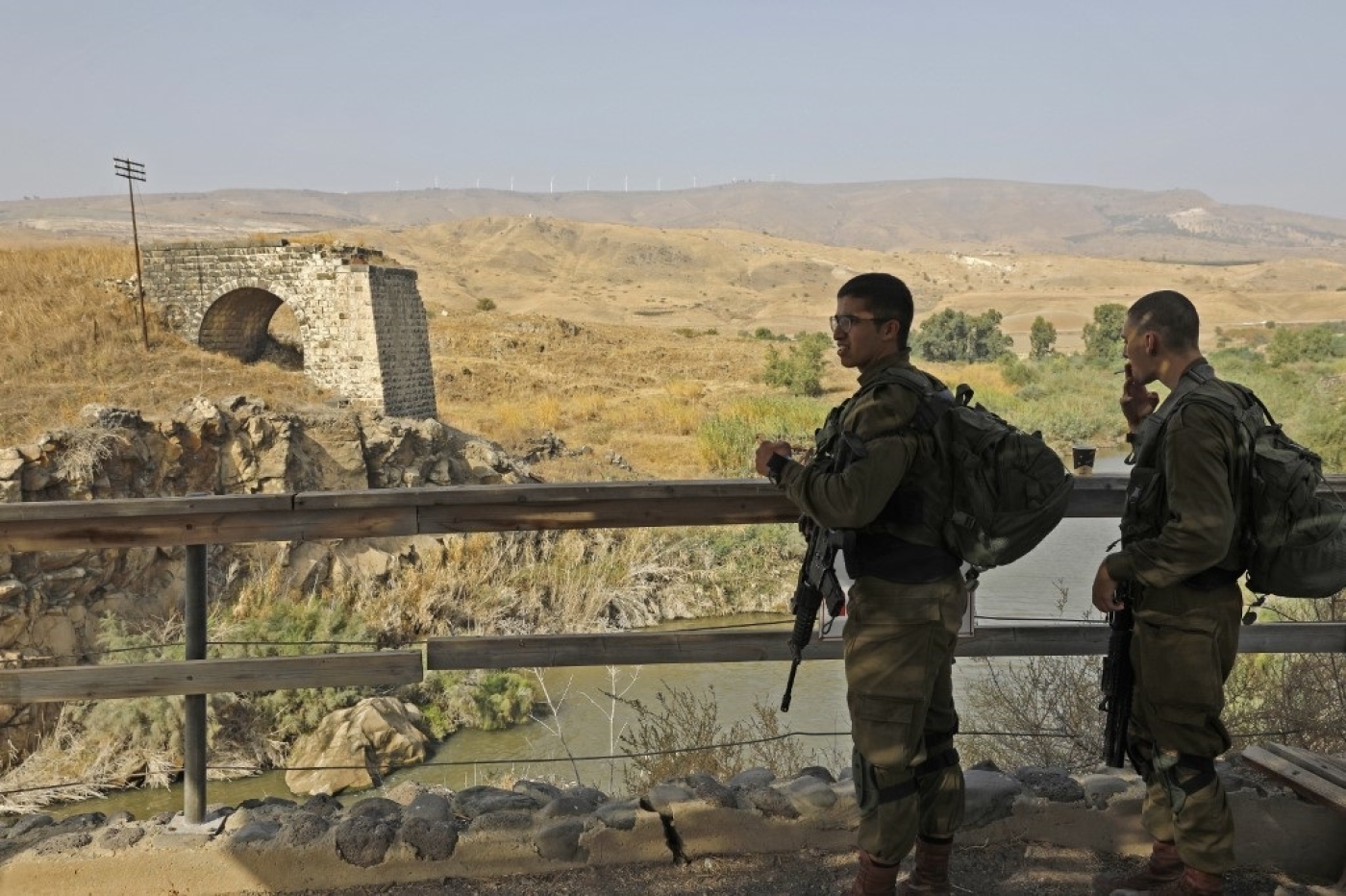 Israeli soldiers patrol the border fence in Naharayim, known in Arabic as Baqoura, an area set to return to Jordanian control next month (AFP)
By
MEE staff

If Israeli farmers go, Jordanians 'will feel the thirst'

The son of former Israeli prime minister Ariel Sharon says Jordanians will go thirsty if King Abdullah II and the Jordanian government go ahead with their decision to stop leasing two fertile areas to Israel after 25 years. Writing in an opinion piece for Ynet, Gilad Sharon said: “Diplomacy is a delicate matter, so the Jordanian king should be told very gently: If you push Israeli farmers out of Naharayim and Tzofar, you will remain thirsty.

"Not Abdullah personally, in the palace, he will, of course, continue to serve chilled mineral water in glass bottles covered with dew beads…But the people of the kingdom will feel the thirst.”

The two areas - Baqoura and al-Ghamra which are known as Nahariyim and Tzofar in Hebrew - were rented to Israel as part of the 1994 Israel-Jordan peace agreement, which allowed either party to opt-out after 25 years.

A year ago, following pressure from protesters and parliamentarians, Jordanian King Abdullah II told Israel he would not renew the agreement. The territories, used for farming and tourism, are scheduled to be transferred back to Jordanian control early next month.

Israeli army’s chief of staff has warned of deteriorating security on Israel's borders with Lebanon and Syria, yet the army's budget remains in limbo as consecutive elections have failed to produce a working government, Israel's news site Mako reports.

For years, the army has been moving money around between different departments to cover annual shortfalls of over $1bn. A new multi-year budget was set to take effect early next year, but without a government in place and a third election looming, the budget is up in the air.

Israeli's Ministry of Finance has said it wants to see the army cut costs, including eliminating tax deductions for leasing vehicles to permanent staff, cancelling grants for retirees and offsetting pensions. The proposed cuts total around $283,000, Mako reported.

Third settler attack on Palestinian village this year without any arrests

Israeli settlers vandalised vehicles and sprayed racist graffiti on the walls of the Palestinian village of Yatma, near the city of Nabil in the northern occupied West Bank, on Thursday evening, Haaretz reported.

The incident, in which “salute from the hill in Yitzhar” and “closed military zone” was tagged, came after a week of settler attacks against Israeli soldiers on a nearby hill, known as Comey Uri, which led the Israeli army to close the area off.

An Israeli security source said that settlers attacking Yatma were probably the same people who set fire to an Israeli police tent on Thursday night, but no suspect had been arrested yet.

Haider Haider, deputy head of Yatma's council, told Haaretz that more than 30 vehicles were vandalised and damaged in the attack which is the third of its kind this year.

No one was arrested after the last two attacks, Haider said.

Comey Uri hill is near the settlement of Yitzhar. On Thursday morning, Israeli security authorities demolished two wooden structures set up by settlers in the area.

On Wednesday night, graffiti was sprayed near a checkpoint in the town of al-Birra, east of Ramallah, which reads: "Perception Order 'Closed Military Area'. Traitors Choose to Harass Jews." More than 20 cars that were at the scene were reportedly vandalised.

Last Sunday, settlers lightly wounded an Israeli soldier after they threw stones near Yitzhar, and the Israeli army reported that about 30 settlers were throwing rocks and piercing the wheels of soldiers' vehicles. No one was arrested.