Israel on Sunday defended its conduct in the 2014 Gaza war as both "lawful" and "legitimate" in an inter-ministerial report into the deadly 50-day conflict.

It insisted its forces did not intentionally target civilians or civilian targets, drawing conclusions that were rejected out of hand by the Palestinians and would appear to contradict testimony from Israeli soldiers released recently in an Israeli NGO report.

The internal report, which was put together by the foreign and justice ministries with input from the military and the National Security Council, was released two weeks before a UN report into the conflict.

Israel has refused to co-operate with the investigation by the UN Human Rights Council, which has been collecting evidence into possible war crimes committed by both Israel and Hamas, and whose findings could form the backbone of future cases at the International Criminal Court.

Israeli Prime Minister Benjamin Netanyahu said on Sunday that “whoever wants to automatically – and without foundation – blame Israel, let them waste their time with the UNHCR report”.

The conflict ended with an informal ceasefire on 26 August after claiming the lives of nearly 2,200 Palestinians, mainly civilians, and 73 on the Israeli side, most of them soldiers, UN figures show.

However, figures put together by the Israeli army contradict those collected by the UN.

The report states that 761 civilians were killed, and that 44 percent of the fatalities were militants.

By contrast, the UN figures found that 1,483 civilians died during the conflict, and that non-combatants made up over 67 percent of the dead.

In the document, which is more than 200 pages long, the authors go to great lengths to detail the environment in which the war was fought and the military's efforts to avoid harming civilians.

"Much of what may have appeared to external parties to be indiscriminate harm to civilians or purely civilian objects was in fact legitimate attacks against military targets that merely appear civilian but were actually part of the military operations of these terrorist organisations," it said.

Civilians were also harmed as a result of "unfortunate - yet lawful - incidental effects of legitimate military action in the vicinity of civilians and their surroundings," it added.

During the conflict, Israel directed attacks at places and individuals only when there was "reasonable certainty" they constituted military targets or were directly participating in hostilities, it said. "Israel did not intentionally target civilians or civilian objects."

"Israel's decision to deny having targeted civilians in Gaza is the logical extension of what it did in the Gaza Strip," Ihab Bseiso, a spokesman for the Palestinian government in Ramallah, told AFP.

He dismissed the report saying the Palestinians would only accept conclusions from an international inquiry, such as the one which is to be published by the UN Human Rights Council on 29 June.

Last month, Breaking the Silence, an Israeli NGO run by serving and former Israeli soldiers, released a report that included the testimony of more than 60 soldiers, several of whom said they had been told by their supervisors that all Palestinians were considered targets.

“The rules of engagement for soldiers advancing on the ground were: open fire, open fire everywhere, first thing when you go in,” said one infantry soldier who operated in Gaza City.

“The assumption being that the moment we went in [to Gaza], anyone who dared poke his head out was a terrorist.” 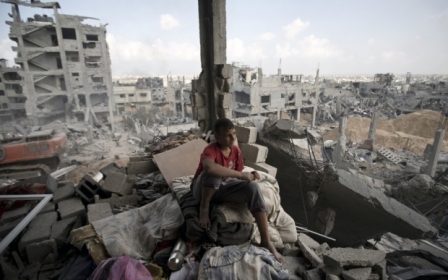