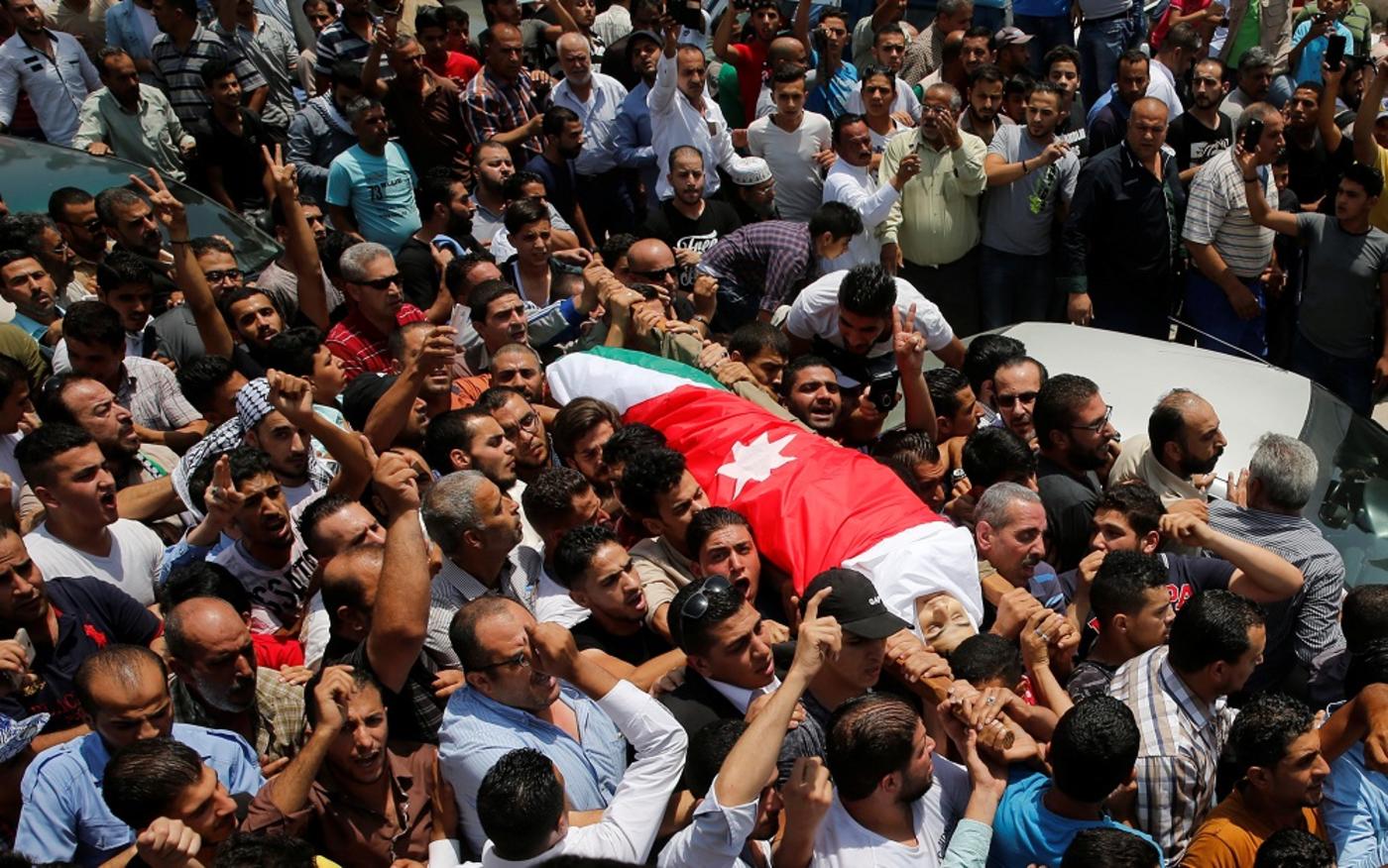 Funeral for Mohammed Jawawdeh, one of two Jordanians shot dead by Israeli guard last July (Reuters)
By
MEE and agencies

Jordan said on Thursday that Israel has apologised for the deaths of three citizens killed by Israelis in two separate incidents in 2014 and 2017 respectively, state media said.

Israel has now pledged to "implement and follow up legal measures" in that case and also to take action in the shooting of an unarmed Jordanian judge by an Israeli soldier at Allenby Bridge in 2014, said government spokesman Mohammad al-Momani.

Al-Momani was quoted by state news agency Petra as saying the Israeli foreign ministry had sent a memorandum expressing "deep regrets and apologies" over the incident at the embassy and pledging to take legal action in the case.

Israel will pay compensation to the three families, he said.

Jordan had said it would not allow Israel to reopen its embassy in Amman until it launched legal proceedings against the security guard. The handling of the shooting had tested ties between Israel and Jordan, one of only two Arab states that have a peace treaty with Israel. The two have a long history of close security ties.

The embassy was closed shortly after Israel hastily repatriated the guard under diplomatic immunity to prevent Jordanian authorities from interrogating him and taking any legal action against him. The Israeli ambassador and embassy staff members were removed.

A statement on Thursday from the office of Israeli Prime Minister Benjamin Netanyahu said the embassy in Amman would resume full operations immediately.

Israel "attaches great importance to its strategic relations with Jordan and the two states will act to advance cooperation between them and to strengthen" a 1994 peace treaty between them, the statement said.

The statement said the Israeli government had met all of Jordan's demands for the return of the ambassador and the reopening of the embassy. But it made no mention of an apology or compensation.

Israel said at the time the armed guard opened fire after being attacked and lightly wounded by a workman who was delivering furniture at his home within the embassy compound, and he acted in self-defence in what Israeli officials called a "terrorist attack".

Israel then said it was highly unlikely it would prosecute the security guard.

Jordanian officials have treated the shooting as a criminal case and say the two unarmed Jordanians - the other was a bystander - were killed in cold blood by the armed guard.

Many Jordanians, in a country where the peace treaty with Israel is unpopular and pro-Palestinian sentiment widespread, were outraged that the guard was allowed to leave and staged protests calling on the authorities to scrap the 1994 peace treaty.

A televised welcome home for the guard and a hero's embrace from Netanyahu had enraged King Abdullah. In a rare outburst, Abdullah accused the Israeli prime minister of using the incident as a "political show" saying it was "provocative on all fronts".