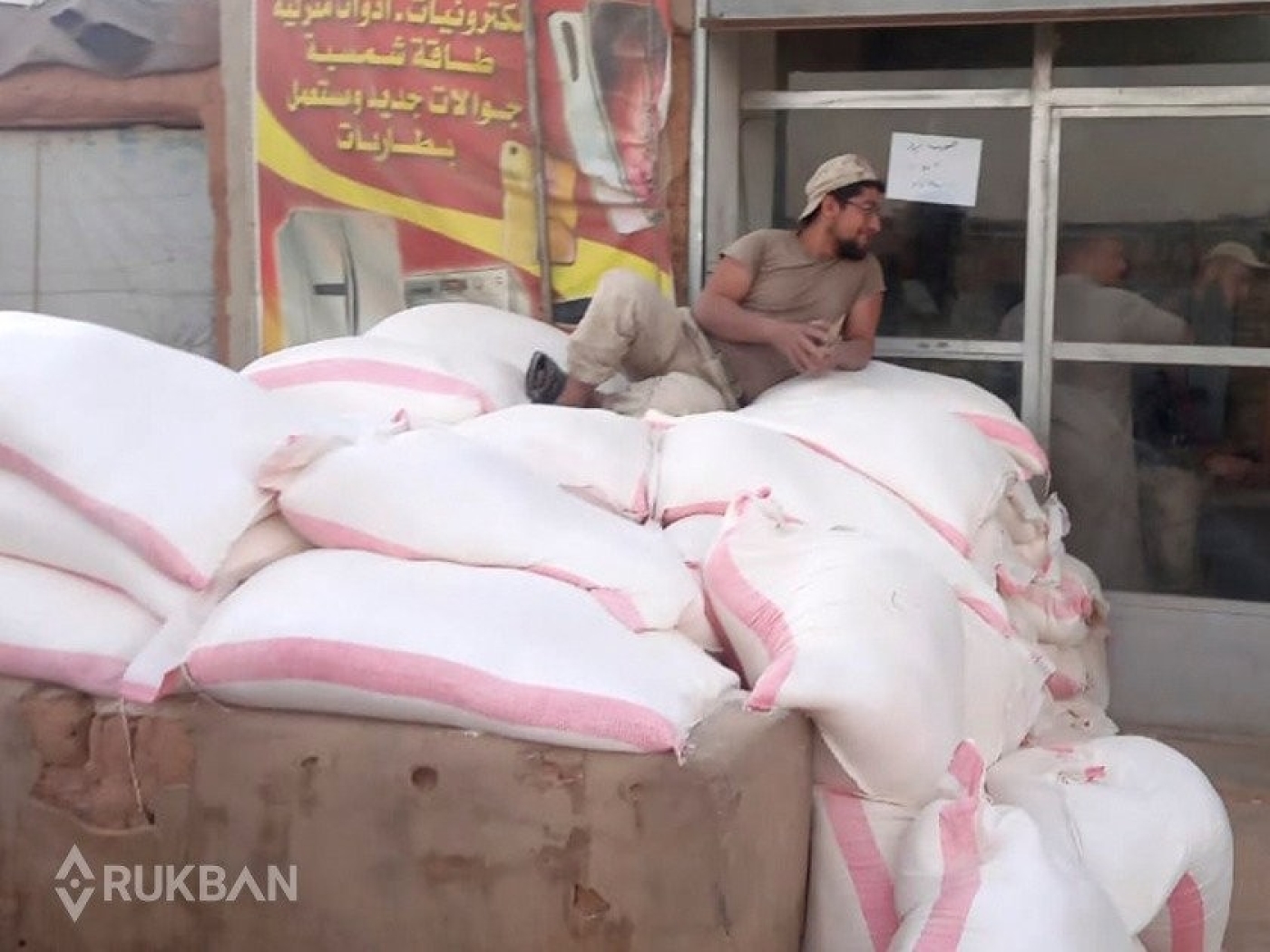 For the first time in years, Jordan last week allowed a food convoy to reach Rukban, a camp for displaced Syrians on the border between the two countries.

Two trucks loaded with flour, oil, sugar, bulgur and tea entered on 9 June, residents told Middle East Eye. The goods, which are not humanitarian aid, were brought in by a Jordanian trader to be sold in the camp.

The food came like a gulp of oxygen for Rukban, which has been cut off from humanitarian assistance for years and edged to the brink of famine last month as all staples, including flour and baby formula, ran out.

But it also represented a significant shift in Jordanian policy on the kingdom's northern border, one that has been prompted by souring relations with the Syrian government and a drug-smuggling operation that has spilled into violence.

Rukban's population fled southern Syria as Bashar al-Assad's government waged war on rebel groups. Broadly supportive of the 2011 revolution, they fear Damascus’s reach and repercussions were they to return home.

Denouncing the camp's residents as "terrorists," Syria exerts a humanitarian stranglehold on the camp - the most recent aid convoy reached Rukban in 2019. Residents have relied on a handful of smugglers to bring in basic goods sold at prohibitive prices, until a crackdown on smugglers last month severed that route for weeks.

For years, Rukban's residents have pleaded unsuccessfully for Jordanian traders to bring goods to the camp. Yet Jordan has largely rejected these pleas, saying the camp was not its responsibility.

Some analysts now speculate that the recent Rukban delivery is motivated by the kingdom's concerns about rampant drug smuggling at its northern border, and the influence of Iran-backed groups in southern Syria.

Though no census has been taken in years, Rukban is thought to be home to around 7,000 displaced Syrians, most of them women and children. It was formed during the war as up to 85,000 Syrians gathered on the border hoping to cross into Jordan, and survived largely thanks to the nearby presence of al-Tanf, a US military base.

Various parties trade blame for the situation: Jordan rejects responsibility for the camp, Russia has accused the Americans in al-Tanf of blocking aid, and the US military refuses to commit to a humanitarian burden.

Meanwhile, Syrian officials have openly acknowledged plans to drive out the population by blockading the camp, and have highlighted how thousands of its residents have returned in recent years.

In 2016, following the killing of six troops near Rukban, Jordanian authorities sealed the border, denying NGOs the possibility to operate there.

Over the years, the limited aid services provided from the Jordanian side have been gradually rolled back: a Unicef-run medical point that was the only provider of emergency care closed in 2020, allegedly due to the Covid-19 pandemic, and never reopened.

Jordan's growing indifference, and even hostility, towards the camp in recent years has walked hand in hand with efforts to restore ties with Assad's Syria.

'The growing quantities of drugs smuggled, and the growing number of anti-smuggling operations, are putting greater strain on the Jordanian army and the border'

In July 2021, Jordan reopened the border with Syria in a bid to boost its flagging economy. Around the same time, the kingdom cracked down on Syrian opposition activists and ordered independent Syrian media to leave the country.

But one year on, Jordanian-Syrian ties are fraying, with Jordan battling a steady rise in drug smuggling on the border. Captagon, an amphetamine produced and sold by government-affiliated groups in Syria, is of particular concern. Over the first five months of the year, Jordan seized more than 20 million Captagon pills, up from 14 million in all of 2021.

In late May, Jordan's King Abdullah accused Iran and its proxy groups, which are widely believed to be leading the Captagon trade, of causing unrest at the border. Meanwhile, the head of Jordan's border security directly blamed the Syrian security services, saying it was not a "true partner" in border protection.

"The growing quantities of drugs smuggled, and the growing number of anti-smuggling operations, are putting greater strain on the Jordanian army and the border, and pushing the government to study new options," Walid al-Nofal, a Syrian journalist and expert on military developments in southern Syria, told MEE.

According to Muhammad Najjar, a Middle East policy analyst and former political advisor on Syria to the US State Department, that could even include supporting Syrian opposition groups to gain control of the border.

"The convoy to Rukban came as a gesture by the Jordanians as a goodwill [sign] in this direction after four years of no cross-border operations," Najjar told MEE.

In 2017, the US, Israel, Russia and Jordan reached a four-part agreement over southern Syria, with Moscow essentially committing to keeping Iran-backed groups away from the border. But the invasion of Ukraine has stoked fears that Russia's focus has shifted and will allow Iran's influence to expand there. This is a real source of concern for Jordan and the US, and is unacceptable to Israel.

If Jordan is indeed considering backing opposition groups to counter this influence, it faces limited options. According to Nofal, two main factions are likely candidates for Jordanian support in the area around Rukban.

The first, Jaish Ahrar al-Ashair, has close ties to Amman and previously received direct support from Jordan. The second is Maghawir al-Thawra (MAT), a US-backed rebel group based out of al-Tanf. MAT is already tasked with protecting the "deconfliction zone" around al-Tanf from terrorist groups and Iranian militias and "preventing drug trafficking," a spokesperson for the group told MEE.

MAT did not deny or confirm rumours about potential cooperation with Jordan, saying it is "ready to cooperate with any party to eliminate drugs and terrorism promoted by the Assad regime and militias," and that it was ready to work outside the de-confliction zone if needed.

The group refused to disclose the number of fighters in its ranks, although one camp resident estimated it to be around 400, a figure that cannot be independently verified. MEE asked the Jordanian Armed Forces and Jordan's Public Security Directorate for comment but did not receive a response.

A spokesperson of the US Central Command told MEE the food delivery "was actually an independent business venture conducted by a civilian" and that neither US forces nor Amman were involved.

"As such, this occurrence does not necessarily mark a policy shift for either entities,"  said the spokesperson, but added that the US were "working with USAID and NGOs in the area to facilitate the delivery of humanitarian assistance packages into Rukban in the next few months", which would contain mostly foodstuff as well as "other commodities."

If carried through, this humanitarian initiative would mark a significant shift in both the US and Jordanian policy towards the camp.

The recent entry of foodstuffs into Rukban has stirred hope among residents of a more durable improvement in relations with Jordan.

"This is a good move, the situation in the camp is now better than it used to be," one of the camp's residents told MEE. "We hope this continues in the long run," he said, adding that he believes the timing of the shipment is linked to Jordan's difficulties at the border.

A woman who lives in the camp told MEE: "Certainly, [this move was meant] to achieve goals to advance Jordanian interests against the Syrian side." Both residents requested anonymity for security reasons. Analysts expect the camp to directly benefit if Jordan turns to opposition factions for support.

"If Jordan reaches an agreement with Russians to support some military factions, Jordan will go back to allowing humanitarian aid through, or allow the entry of goods," Nofal said.

"You have to keep in mind that part of the camp population is related to fighters from MAT and other opposition factions."

But Jordan's ability to work with opposition groups is a big unknown. Aside from those located in the deconfliction zone, Jordan "could not support a military faction located in regime areas at the moment without the tacit agreement of Russia, because [this faction] couldn't face the regime alone," Nofal said.

"The second question is, can Jordan finance these groups? I think Jordanian funding will be very limited."

Jordan is now performing a difficult balancing act in relation to Syria. On the one hand, authorities want to restore commercial flows with Syria and repair the devastated economy of border towns. On the other hand, the kingdom is embroiled in a costly and deadly security crisis at its border.

By extending a hand to Rukban, Jordan is helping to maintain a thorn in Assad's foot and while temporarily derailing Syrian efforts to starve out residents. It could signal a deeper shift in Jordan's policy towards Syria. Syria War
'On the cusp of death': Bread and flour run out in Syria's Rukban camp