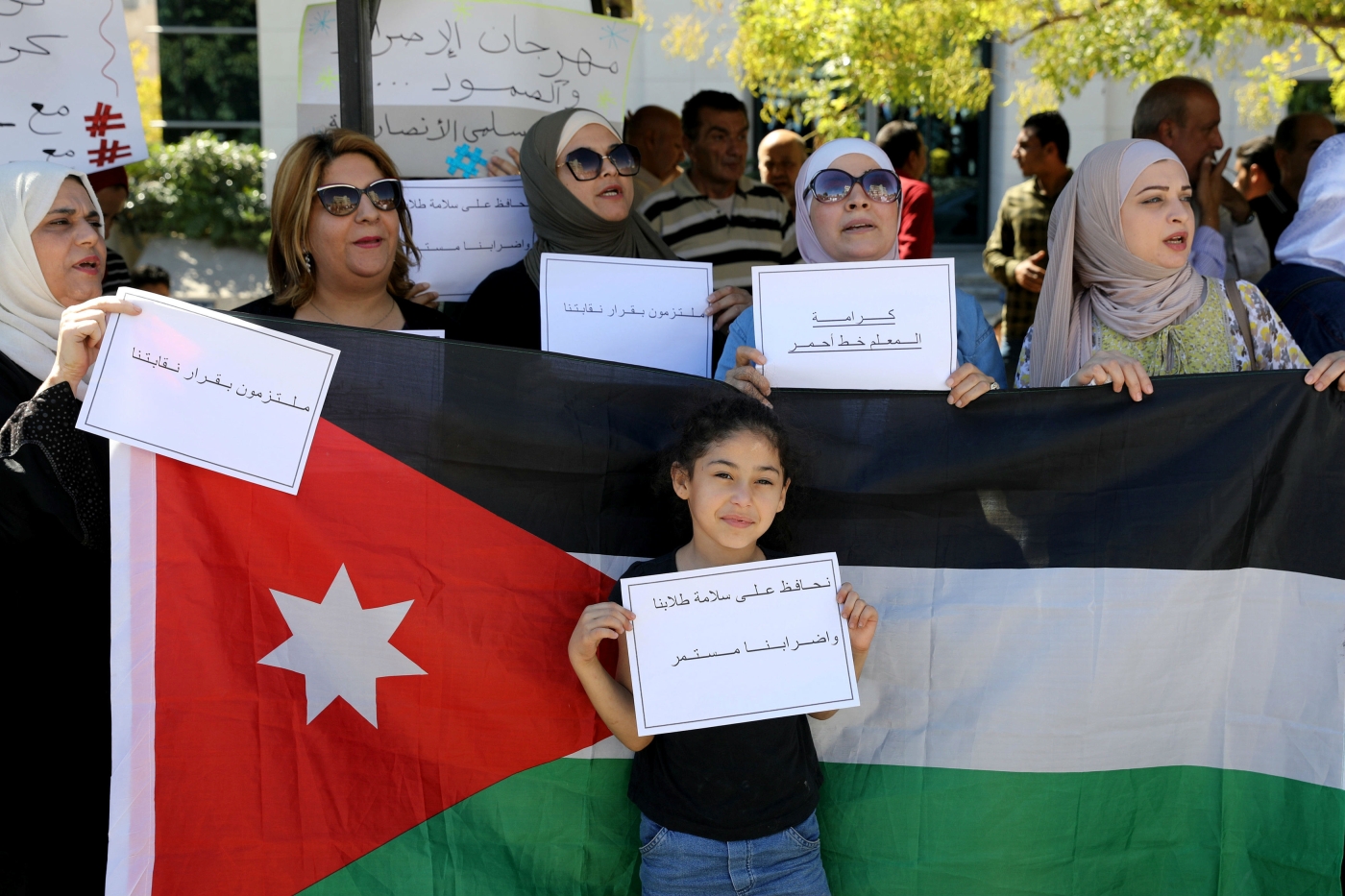 A young girl and teachers stand with a Jordanian national flag during a protest in Amman on 3 October 2019. The placards read: "We will ensure the safety of our students and our strike continues" (Reuters)
By
Mohammad Ersan
in
Amman

Jordanian teachers claimed victory on Saturday night after agreeing to end their four-week strike, which has badly disrupted schooling in the kingdom.

Representatives of the teachers and the government were locked in negotiations from Saturday evening until dawn, when they settled on a compromise that will see educators' salaries increased.

Teachers had been demanding a 50 percent rise and an apology from the government for an attack carried out by security forces on a protest four months ago.

In the end, they settled for a compromise that sees teachers getting a pay rise according to their different levels of experience.

At a minimum, assistant teachers will receive a 35 percent rise, with that shooting up to 75 percent for the most qualified and experienced teachers in the country. The strike has been one of the kingdom's most-discussed issues in recent weeks, and Jordanians waited eagerly for a positive outome during Saturday's meeting between the teachers union and the government.

As soon as the meeting ended, social media was alive with teachers, students, parents and supporters celebrating the end to the strike and the return of students to their schools.

The resolution follows an apology made by Prime Minister Omar al-Razzaz for the security forces' 5 September attack on a protest, which helped calm tensions between teachers and the government.

The apology was welcomed by Jordanian Teachers Syndicate spokesman Norredine Nadim, who told MEE that the "union welcomes and appreciates the apology," though acknowledging that it came late.

"They have been going to class with this hanging over them as many teachers are forced to get a second job to provide for their families because their current salaries don't exceed $600 per month."

Mubarak Abu Yamin, the minister of state for legal affairs, described the agreement at a news conference after the meeting as a "victory for Jordan". He then called on teachers to offer sweets to students on Sunday morning.

Nasser al-Nawasrah, deputy head of the Jordanian Teachers Syndicate, said at the news conference "it was a historic agreement".

Previously, talks between the government and the syndicate had been deadlocked, with a court ruling on Wednesday that the teachers must end their strike immediately for the public good.

The next day, the syndicate, which represents 140,000 teachers, said it would abide by the court's decision and suspend the strike, only to surprise the government by saying it would in fact resume striking on Sunday if its demands were not met.

At the time, Nadim explained the move as a way of circumventing the legal implications: "By suspending the strike on Thursday, we closed the file with the courts, and on Sunday if we strike it will be a new strike, which will be renewed daily."

The Jordanian government has been desperate to reach an agreement that would suspend the strike.

Media Minister Jumana Ghneimat told MEE that the "government has been done everything possible to end the teacher's strike".

The teachers' strike has been supported by the public.

Twelve hours after an irate parent attacked a female teacher in Zarqa, east of Amman, he returned to apologize to her, indicating a general mood of support for the teachers, despite the problems their strike has given to parents.

The incident in Zarqa was not an isolated case.

Tens of parents protested on Wednesday outside the teachers syndicate offices demanding an end to the strike, but after they met with the union members they instead announced their support for the pay rise.

In the northern city of Irbid, parents brought a local delicacy, mansaf, to the striking teachers, and attached a sign to the rice-and-meat meal with a hashtag saying: "We are with the teachers".

Meanwhile, in other locations parents protected female teachers from attacks against them by disgruntled parents.

Nadim said the popular support for the striking teachers made it into a national event.

"The strike has become a national protest because Jordanian culture shows high respect to teachers and doesn't agree they should be attacked, especially attacks against female teachers," he said.

Luqma Iskandar, editor of local radio station Al Hayat FM, told MEE that the government would be wise to pick up this important popular support.

"It was not strange that people in Jordan supported the demands for improvement in the livelihood of teachers," he told MEE.

"They are all citizens and suffer from the economic situation, and they saw in the teachers' strike a reflection of their own aspirations, and that is why they refused to send their children to school despite the fact that the government sent millions of SMS messages asking the parents to send their children."

With the end of the strike, the Razzaz government puts to rest a contentious file that included thousands of teachers demanding the resignation of his government.

On the other hand, the success of the teachers will undoubtedly whet the appetite of other public servants who will demand similar pay rises. 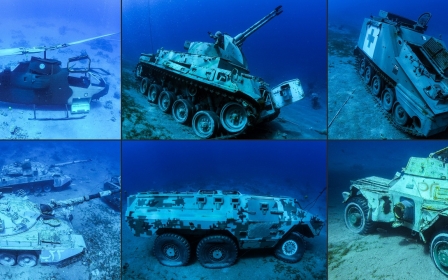