Once Jordan's most organised and strongest opposition group, the Muslim Brotherhood finds itself divided - why? AMMAN – Seventy years after its foundation, Jordan’s Muslim Brotherhood stands at a crossroads after an unprecedented rift has split the group.

Once Jordan’s most organised and strongest opposition, the brotherhood is now divided into two groups: a recently registered “charitable society” and the original organisation which has been declared illegal by the Jordanian authorities.

A 1946 cabinet decision licensed Jordan’s MB as an offshoot of Egypt’s Muslim Brothers. But recently, the Jordanian government started started sending messages to the group to “correct” their “legal status”.

The Jordanian government approved the request immediately and declared it as the “official” MB group.

Thunaibat, the leader of the newly founded Brotherhood organisation, told MEE that re-registering the organisation will protect it from being banned.

“The old registration stated that we were a branch of Egypt’s Brotherhood. Once the root has become banned, the branch will eventually become banned,” he told MEE, adding that the organisation currently has 44 members only.

Leaders of the original organisation, however, accused the government of plotting the split to weaken the organisation’s power.

“Our problem is not legal but rather political,” Badi Rafyah, spokesperson for the original Brotherhood group, told MEE.

Rafayah said the group has become targeted as a result of pressure from neighbouring countries.

In 2013, Egypt’s court banned the Muslim Brotherhood and, last August, dissolved the group’s political wing. In November, the United Arab Emirates, a key donor to Jordan, designated the organisation as a terrorist group.

Bani Irshid was the first arrest of a high-level opposition figure in decades.

Fearing rising religiously charged militancy in the country, Jordan is unlikely to ban the group outright, but will work to weaken its power instead, analysts told MEE.

Meanwhile, Jordanian officials denied any claims about their involvement in “dividing” the group.

“It is an internal issue between the leadership of the Muslim Brotherhood. The government has nothing to do with it,” Khaled Kalaldeh, Jordan’s Minister of Political Development, told MEE.

Kalaldeh told the MEE that there is “one legal MB group in Jordan, which was recently registered”.

The government also approved transferring the property and assets of the original organisation to the new group, which analysts say is a further attempt to weaken the organisation financially.

In recent days, various Arabic media reports have suggested that the Saudi Minister of Islamic Affairs and a leader of the original Jordanian Muslim Brotherhood met recently, raising questions about whether the neighbouring country may have been sending a subtle message to Jordan. However, details of the meeting in the reports – including who called for it and where it was held – were not immediately clear on Friday.

In addition to regional pressure, some analysts attribute the unprecedented shift in Jordan’s relations with the Muslim Brotherhood to changes in the group’s work and demands after the Arab uprisings.

“We have seen a change to the track the Brotherhood followed after the Arab Spring when they raised high demands from the government such as constitutional monarchy,” Hasan Abu Hanieh, Amman-based analyst and expert on Islamic movements, told MEE.

As Islamic movements became “risky” for Arab governments during the uprisings, Abu Hanieh said, Jordan started employing “soft tactics” with the group to avoid any direct clashes with them.

“Jordan was not going to wait until what happened in Egypt happens in their country,” Abu Hanieh said in reference to the rise of the Brotherhood.

“Jordan will not eliminate the group but will also not work to include the group in politics such as in Morocco,” he added.

Although the Brotherhood still has wide support in Jordan, it has declined in recent years, due, analysts say, to what is seen as its traditional approach to politics.

“The group has a rigid approach to politics and their speeches directed towards the public remained the same despite all the changes that happened in the region,” Abu Hanieh said.

Jordan’s Muslim Brotherhood and its political wing, Islamic Action Front (IAF), boycotted the country’s parliamentary elections from 1997 until 2003 and then again in 2013 to protest against changes to the electoral system approved by parliament in 2012.

The party complained that the system discriminates against urban voters where two thirds of people live but who are allocated less than one third of parliamentary seats, and also alleged fraud in the 2013 vote.

But support for the group appears in elections held by trade unions and students unions where the group wins the majority of seats.

The future for the organisation, said analysts, is not bright. 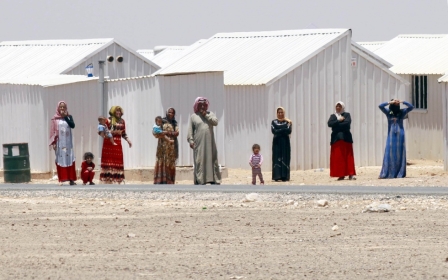