TAIZ, Yemen - Three Al Jazeera Arabic crew members went missing on 18 January while they were on their way back to their house in the al-Masbah area in the centre of Taiz city, which is completely under the control of the Popular Resistance.

Al Jazeera correspondent Hamdi al-Bokari and his crew, photographer Abdulaziz al-Sabri and driver Moneer al-Sabai, are believed to have been kidnapped by a group of Popular Resistance fighters.

A friend of Bokari, who worked with him as a photographer, told Middle East Eye on the condition of anonymity that Bokari and his colleagues were kidnapped around 10pm after having dinner at the house of Abdulstar al-Shamiri, a leader in the Resistance.

He said that there are more than 10 groups fighting with the Resistance in Taiz, including Salafi fighters and alleged members of al-Qaeda in the Arabian Peninsula (AQAP). The leadership of the Resistance cannot control all of these groups, he added.

The Al Jazeera Media Network has called for the immediate release of the news team, but the news channel did not accuse any side of the abduction.

The news channel said in a statement on Thursday that there were "indications that Bokari had been kidnapped by unknown persons".

No one has claimed responsibility for the abduction yet, and the Resistance of Taiz province said that there are sleeper cells of former president Ali Abdullah Saleh inside Taiz.

Moaath al-Yaseri, a leader of the Popular Resistance in Taiz, said that Saleh had resorted to using his sleeper cells to defame the reputation of the Resistance, after being unable to take over Taiz.

"Al Jazeera crew members were kidnapped by the sleeper cells of Saleh, which have spread in the areas of the Resistance in Taiz, but the Resistance is following the issue now and we will not let the abductors flee," he added to MEE.

However, the Yemeni Journalists Syndicate (YJS) said that the leadership of the Popular Resistance of Taiz is responsible for the abduction of Bokari and his colleagues given that they were abducted from an area under its control.

"Even if the Resistance did not abduct the Al Jazeera crew members, the Resistance is responsible for the al-Masbah area, and it has to keep it safe and protect the residents of that area," said Ashraf al-Rifi, the secretary of YJS’s rights and freedoms committee.

There are 13 journalists still detained by the Houthis and by al-Qaeda, according to YJS, which called for their immediate release.

There were no reports of the Resistance kidnapping or arresting any journalists last year.

Fareed al-Homaid, a freelance journalist based in Taiz who used to work for the Yemen Times newspaper, said that he fled Sanaa in April 2015, and he is thinking now about fleeing Taiz to another province, as Taiz seems not to be safe anymore for journalists.

"In Sanaa, we know that the Houthis abduct journalists, but in Taiz we do not know which group of the Resistance is responsible for the abduction, so the abductor is anonymous and this is very dangerous," Homaid told MEE.

He added that he feared journalists would be victims of disputes between various groups of the Resistance in Taiz, confirming that he had become very cautious about his movements throughout the city.

Homaid condemned the leadership of the Resistance for its attitude towards the abduction of Al Jazeera crew members.

He said that even if Saleh's sleeper cells kidnapped the Al Jazeera team, the sleeper cells could not take them out of Taiz city, as the checkpoints of the Resistance have spread around the entire al-Masbah area and the surrounding areas, so he believes that the Resistance is the only one responsible for any journalist abductions in Taiz city.

On Saturday, crowds of residents in Taiz protested in solidarity with the Al Jazeera team, holding photos of the abductees and calling for their immediate release. 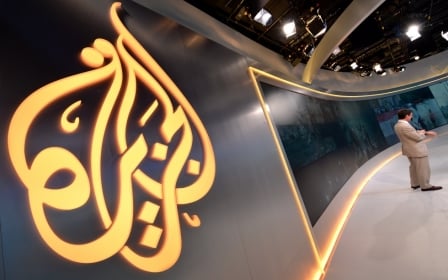