A delegation of high-level Saudi officials arrived in Ankara on Friday morning after the Turkish and Saudi governments reached an agreement to form a joint working team to investigate the disappearance of journalist Jamal Khashoggi.

Sources told Middle East Eye that the delegation on Thursday flew into Istanbul, where Khashoggi was last seen entering the Saudi consulate on 2 October, and included diplomats and security officials.

Ibrahim Kalin, a spokesperson for Turkish President Recep Tayyip Erdogan, told the Anadolu news agency on Thursday that the idea to form a "joint working group" had been proposed by Saudi Arabia.

Sources close to the Turkish investigation have told MEE and other media organisations that Khashoggi, a veteran Saudi journalist who had been living in self-imposed exile in Washington, was killed shortly after entering the consulate last Tuesday. However, Turkish officials have not put forward any evidence in public to corroborate those suspicions.

Saudi officials have strongly denied any involvement in his disappearance and say that he left the consulate soon after arriving. However, they have not presented any evidence to corroborate their claim and say that video cameras at the consulate were not recording at the time.

Saudi Arabia's interior minister rejected early on Saturday claims there were orders to kill Khashoggi, describing them as "baseless allegations and lies".

MEE understands that the move to form a working group follows a conversation between White House aide Jared Kushner, who is also President Donald Trump's son-in-law, and Mohammed bin Salman, the crown prince of Saudi Arabia, earlier this week.

President Trump, speaking to reporters in Ohio, said he had not yet spoken to Saudi Arabia's King Salman about Khashoggi's disappearance but would be calling him "pretty soon".

An official Saudi source called the decision on the joint working group "a positive move" and expressed "full confidence" in the joint investigative team, the Saudi Press Agency reported.

A senior source with knowledge of the Turkish investigation told MEE the Saudis are on the verge of accepting Turkey’s evidence that a major crime took place at the consulate.

The Saudis intend to blame elements within their country’s "deep state" security establishment for the journalist’s kidnapping, the source said.

The source said the Saudis are hoping to build a firewall around bin Salman, who has insisted he knows nothing about any alleged kidnapping operation.

The Saudis' acceptance of Turkey's version of events - that a crime took place at the consulate - would represent a major U-turn from what Saudi officials have said publicly since Khashoggi was first reported missing.

'They know where to go'

A senior Turkish official told MEE on Wednesday that investigators knew in which room of the consulate Khashoggi was killed and where the body was taken to be dismembered.

"If the forensic team are allowed in, they know exactly where to go," the official said.

The source said police investigators were confident they already had enough forensic evidence from searches of the sewage network connected to the building.

Earlier this week, Turkish media outlets identified 15 Saudis thought to be involved in the suspected murder, who flew into Istanbul and left on the same day he disappeared, including a forensics expert and three members of bin Salman's personal guard.

A source told MEE the Saudis took all the hard drives from the security camera room at the consulate with them when they left the building.

Another Turkish source with knowledge of the investigation told MEE that the Turks had video and audio evidence of the killing. However, they have not revealed how they obtained this evidence. Khashoggi
Trump: Khashoggi disappearance no reason to stop US arms sales to Saudis 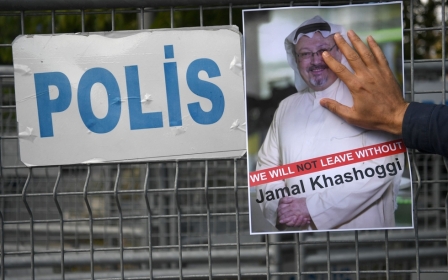