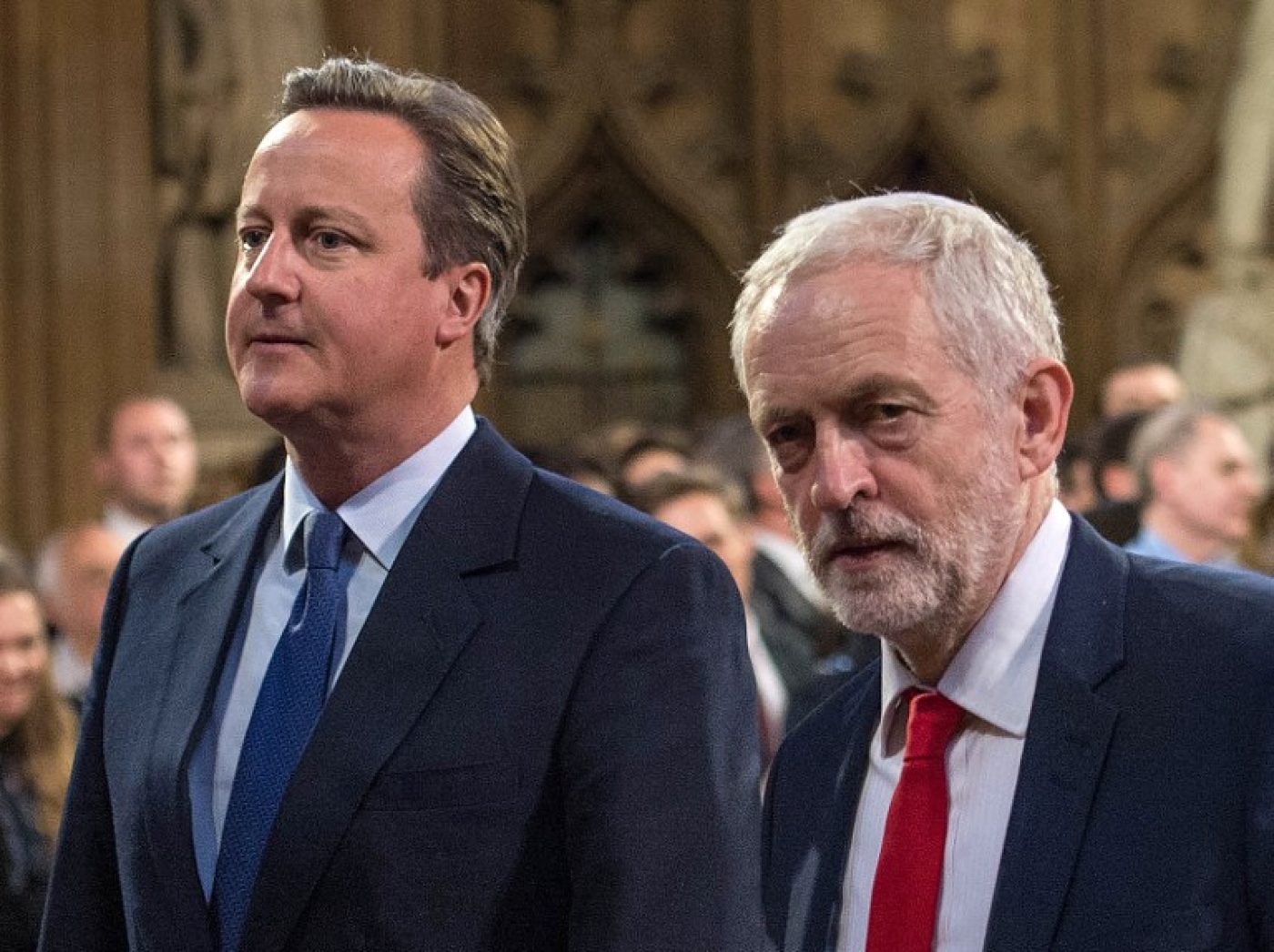 Jeremy Corbyn (R), alongside Prime Minister David Cameron, said the UK should not turn a blind eye or sell weapons to countries who abuse human rights (AFP)
By
Simon Hooper

Labour Party leader Jeremy Corbyn on Wednesday called on the British government to reform its widely criticised Prevent counter-extremism strategy and put human rights concerns at the centre of the country's foreign policy.

Corbyn's comments, made in response to the announcement of government plans for a new counter-extremism bill, came after Europe's top human rights watchdog urged the government to engage with Muslim communities and warned that elements of Prevent may be counterproductive and contributing to the spread of extremism.

"We will of course support strong measures to give the police and security the services and resources they need but we will also support checks and balances to ensure powers are used appropriately," Corbyn said.

"We would welcome any proposals from the government to reform the Prevent strategy and instead to emphasise the value of community-led work to prevent young people being drawn into extremism in any form.

"In foreign policy we must put our promotion of human rights at the centre. We cannot continue to turn a blind eye and, worse, sell arms to countries who abuse human rights either within or beyond their borders."

In an introduction to the Queen's Speech on Wednesday, in which the government sets out its proposed legislation for the year, Prime Minister David Cameron pledged to tackle the "menace of extremism".

"We should be proud of the fact that today Britain is already one of the most successful multi-racial, multi-faith democracies anywhere on earth. But we must also recognise that extremists – both violent and non-violent – are trying to drive our country apart," he wrote.

The bill includes measures to strengthen powers, allowing authorities to curb the activities of individuals and groups deemed extremist via civil orders and to intervene in unregulated schools "teaching hate".

Middle East Eye exclusively revealed on Tuesday that Labour, which originally launched Prevent as part of a package of counter-terrorism measures introduced by Tony Blair's government in the aftermath of the 2005 London bombings, was conducting an internal review into its own policies with a view to opposing Prevent.

MEE understands that Labour researchers have consulted organisations including the Muslim Council of Britain with a view to developing “positive alternatives” to Prevent.

Prevent is already the subject of two separate parliamentary inquiries, while David Anderson, the independent reviewer of terrorism legislation, has called for an independent inquiry into counter-extremism policies amid concerns they are discriminatory against Muslims.

In a report published on Tuesday, Nils Muiznieks, the Council of Europe’s commissioner for human rights, said he shared concerns that Prevent “runs the risk of isolating the very communities whose cooperation is most needed to fight violent extremism.”
Muiznieks also highlighted concerns that the extension of Prevent into schools, where teachers since last year have been obliged to monitor and report children deemed to be at risk of being drawn into terrorism, ran the risk of stifling free speech and open debate.

“The Commissioner recalls that the response to the threat of terrorism should not itself encroach upon the very values of freedom, democracy, justice and the rule of law,” he wrote.

Muiznieks is the latest international figure to flag up issues surrounding Prevent, which was also cited as a cause for concern by Maina Kiai, a United Nations special rapporteur, in a report on the country last month.

Muiznieks’ criticism raises further questions about the government’s policies even as details of a new counter-extremism and safeguarding bill aimed at tackling non-violent extremism were announced in Wednesday’s Queen Speech, which marks the official start of the new parliamentary year.

An extremism bill promising similar measures was also included in last year's Queen's Speech but failed to make legislative progress with reports suggesting that the delay was due to issues with settling on a legally robust definition of extremism.

Lawyers have suggested that efforts to outlaw non-violent extremism, which many Muslims fear could also target political activists or those who hold conservative religious views, could be challenged on discrimination and freedom of speech grounds.

Commenting on the proposed bill on Twitter, Miqdaad Versi, the assistant secretary general of the Muslim Council of Britain, said that issues about defining and identifying extremism appeared not to have been resolved.

He also flagged up concerns that the use of civil orders against supposed extremists would deny those accused of the protection of trial by jury.

In a statement, the MCB, an influential umbrella group of Muslim organisations in the UK, said it would examine the counter-extremism bill closely.

"Whilst we all want to confront terrorism, we are concerned that the government wishes to confront extremists without agreed upon definitions of extremism.

It also cited the recent case of a London imam, Suliman Gani, to whom Cameron was last week forced to apologise after describing Gani as a supporter of the Islamic State (IS) group during the recent London mayoral election campaign, following which the MCB called on Cameron's Conservative Party to investigate Islamophobia within its ranks.

"This sorry affair should tell us that innocent people can be branded as extremists through subjective notions of extremism."

Muiznieks said in his report that he supported the fact that “concrete measures should be taken to prevent and fight radicalisation, in particular in schools, disadvantaged neighbourhoods, prisons and on the Internet and social media”, but said that policies needed to be preventative without being repressive.

He said that such policies should promote tolerance by “encouraging inter-religious and cross-cultural dialogue, involving NGOs, with a view to preventing tensions capable of contributing to the commission of terrorist offences” and stressed that all groups should have access to “inclusive, quality education”.

He added: “Reinforcing community support and gaining the confidence of communities should be the government’s priority. This may be done by promoting intercultural dialogue in schools; taking measures to combat marginalisation, social exclusion, discrimination and segregation, especially among young people in disadvantaged neighbourhoods; and through supporting families in their role of educating their children to respect the values of democracy and tolerance.”

Responding to Muiznieks’ report, the UK government said that Prevent had safeguarded thousands of people from targeting by extremists and terrorist recruiters.

“Prevent does not target a specific faith or ethnic group - it deals with all forms of extremism. Rather, Prevent protects those who are targeted by terrorist recruiters. This is challenging but absolutely necessary work. Currently the greatest threat comes from terrorist recruiters inspired by Da'esh [IS].

“Our Prevent programme will necessarily reflect this by prioritising support for vulnerable British Muslims, and working in partnership with British Muslim communities and civil society groups.”

The government also said that the Prevent duty should not stifle classroom debate.

“We have explicitly said that schools should be safe spaces in which children and young people can understand and discuss sensitive topics. That includes terrorism and the extremist ideas that are part of terrorist ideology. They need to learn how to challenge these ideas. Ideas that they see in the newspapers and on the internet every day.

"We expect schools to be proactive in challenging intolerance in the classroom and in school communities. We cannot be neutral in the face of intolerance.”

In notes accompanying the Queen's Speech, the government said that it had stepped up efforts to safeguard individuals at risk of radicalisation in the past year, through a network of "Prevent professionals" who had worked with 2,790 different institutions, and engaged nearly 50,000 individuals in 2015.

It said it had supported 130 community-based projects aimed at "reducing vulnerabilities to extremist narratives" that had reached over 25,000 participants, with more than half of those taking place in schools.

But civil liberties and human rights campaigners fear that a new extremism bill, which is expected to include measures to ban groups and silence individuals deemed extremist even if they do not incite violence or hatred, will exacerbate problems caused by Prevent.

In a statement, the Islamic Human Rights Commission accused the government of "wilfully ignoring the concerns of human rights officials and activists" and of engaging in a "wider social engineering exercise designed to control and shape Islam and Muslims in Britain".

"The government cannot use the pretext of protecting our British way of life by bringing in legislation that actually undermines British values such as freedom of belief and expression in an unprecedented manner," said Massoud Shadjareh, the chair of the IHRC. "The civil penalties being proposed also undermine the rule of law. If someone is suspected of committing a crime they should be dealt with according to the law, not channelled down a track that bypasses due process."

Ibrahim Mohamoud, communications officer at campaign group Cage, urged the government to learn from criticism levelled at Prevent and adopt an approach based on "dialogue and openness"

"Curtailing someone’s ability to express their freedom of speech should happen when incitement and calls to harm others are made," said Mohamoud.

"Anything which seeks to redraw that long established consensus will inevitability be seen for what it is – a baseless power grab by the government for its own political purposes.

“British society has been based around cultural institutions, rather than attempts to impose British ‘values’. Governments should not be in the business of passing laws against people and groups who express opinions they disagree with.”

"Extremist views are legal in liberal western society. Banning them sets an unnnerving precedent," the organisation said in a series of tweets criticising proposals to use control orders to silence extremists. 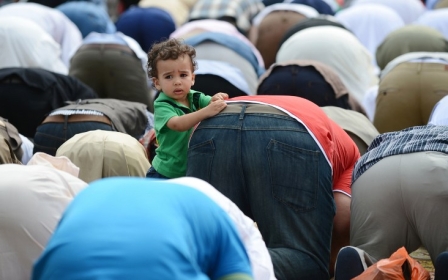 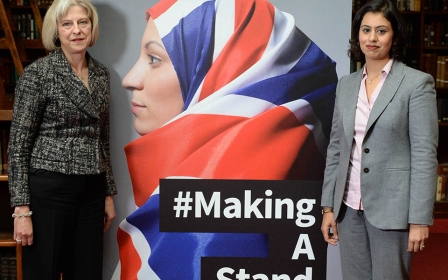