TRIPOLI - After 12 days aboard the Nivin, a ship docked in the Libyan port of Misrata, 78 migrants are believed to have been forcibly removed from it and detained on Tuesday.

At 11:11am local time (9:11 GMT) Mohammed, an 18-year-old migrant from South Sudan with whom Middle East Eye had been in touch by phone, sent an ominous message.

“Now the coast guard come to us with guns,” he wrote.

Some 20 minutes later, he sent a photo of an armed member of the Libyan security forces standing on the dock. After receiving that last photograph, MEE has been unable to reach either Mohammed or three other migrants from the Nivin.

According to local sources, Libyan armed forces boarded the cargo ship around noon on Tuesday, only leaving the port about an hour later.

With access to the port prohibited for journalists and humanitarian organisations, little is known of the fate of the dozens of migrants who have spent nearly two weeks refusing to disembark from the Nivin out of fear of what might await them in Libya.

However, reports have emerged that several of the ship’s migrants were taken to a hospital in Misrata although their exact number and condition remain unclear.

Others, including minors, have been reportedly taken to the al-Kararim detention centre in the eastern Libyan city.

According to a confidential document drawn up by local officials and obtained by MEE, armed forces used rubber-coated steel bullets during their operation aboard the Nivin, as the authorities have stated they would no longer consider the scores of people as migrants, but instead classify them as "hijackers" for refusing to leave the ship.

Now the coast guard come to us with guns

All detained migrants were set to be handed over to the public prosecutor’s office for interrogation, the document read - further instructing that NGOs be prevented from reaching out to the migrants “until investigations are completed”.

According to a local source present at the Misrata port, the armed intervention would likely not have occurred without the permission of the Nivin's captain.

The standoff between migrants and Libyan authorities began on 6 November when 95 people, including 28 minors, set off in a raft from the coastal Libyan city of Khoms seeking safer shores in Europe.

After several hours the migrants realised they were in danger and tried to get help from passing ships. Six passed by without providing assistance before the Nivin, a cargo ship flying the Panamanian flag, finally rescued them, only to bring them back to Libya on 9 November.

After days-long mediation between Libyan authorities and the migrants, a Somali woman and her three-month-old baby, along with 12 others, disembarked. The majority, though, have refused to leave the ship.

Many had already spent months travelling across dangerous terrain at the whims of smugglers or been held in Libyan detention centres during their journey towards Europe. Some, aid workers say, have been tortured by traffickers trying to extort money.

In the Mediterranean, where there are no longer NGO rescue ships on patrol, the incident has shed light on the moral maze in which merchant ships now find themselves in the absence of aid workers.

Mohammed, the young South Sudanese migrant, had sent MEE graphic images of the living conditions aboard the Nivin. With no lavatories on the ship, the migrants have been forced to urinate in bottles and defecate on the floor.

On Monday, the Nivin migrants were visited by a delegation of representatives from the migrants' countries and the Misrata attorney-general, who tried to convince them to disembark.

Mohammed told MEE that Libyan security forces had brought up the possibility of the migrants being taken to Malta - but this proposal, he said, was accompanied by a threat: "We will send you to Malta, and they will put you in jail there, so it is better to disembark you here."

“We told them we don’t want to go outside” the ship, Mohammed told MEE on Monday. “We know the Libyan guys well, if we go outside they [will] put us [in] jail.”

According to international law, the migrants would be able to apply for asylum and humanitarian protection if they did make it to Malta, unlike in Libya. 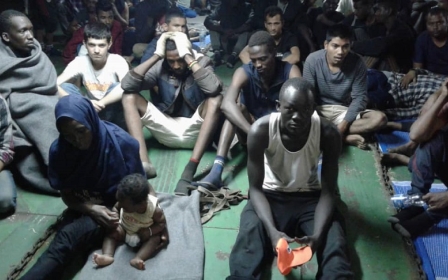 Refugees
They can't sail for Europe - so what's happening to migrants trapped in Libya?