Libya: Hundreds of refugees attacked and detained by authorities in Tripoli 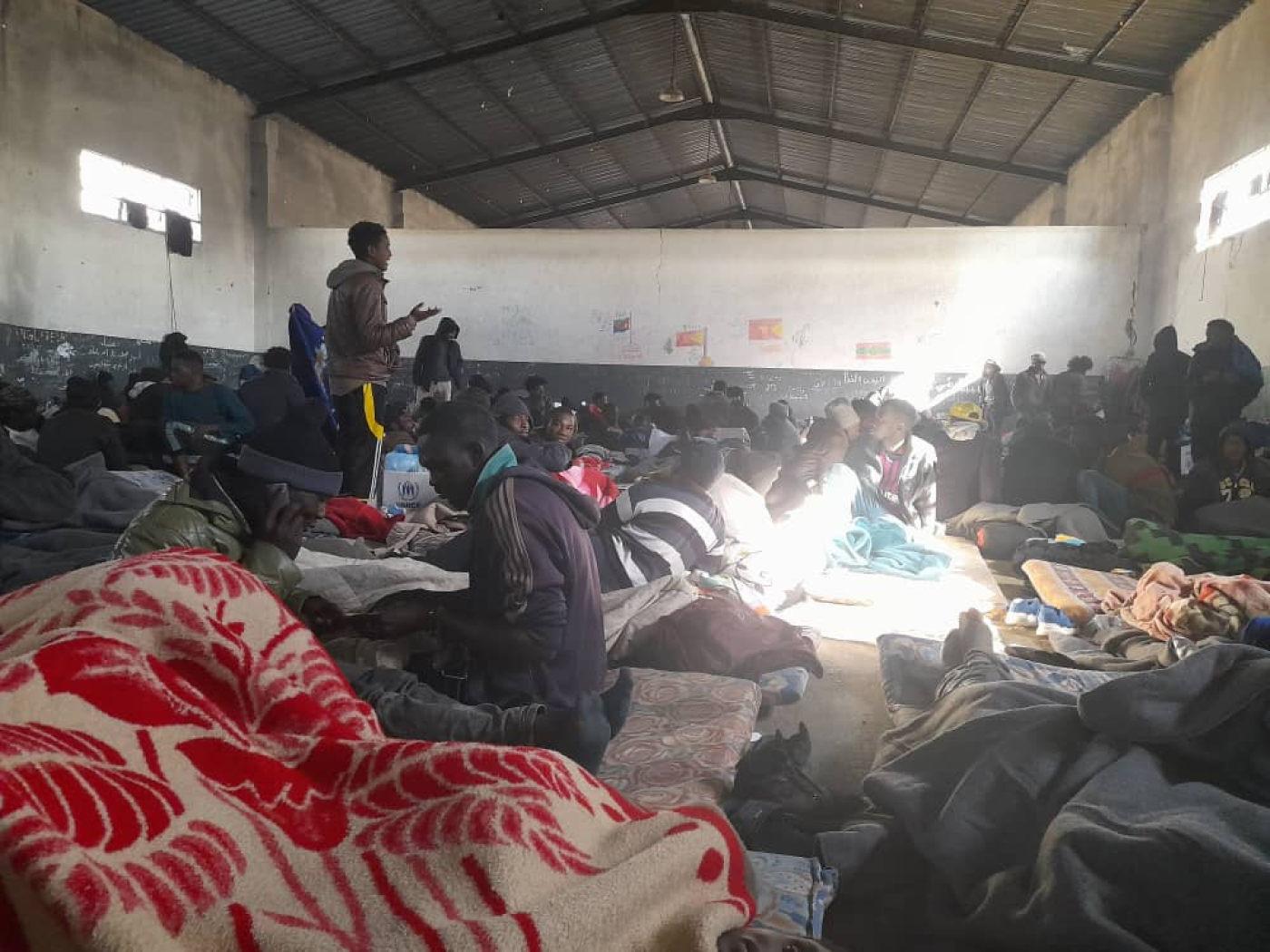 More than 600 migrants, refugees and asylum seekers were attacked and detained by Libyan authorities in front of a former community development centre in Tripoli on Monday morning.

The detainees, who are almost all from sub-Saharan Africa, were taken to Ain Zara detention centre in the Libyan capital at 2am local time, after a stretch of the makeshift tents they were sleeping in were burnt down.

Thousands of people have been sleeping rough in front of the centre, which was run by the United Nations' refugee agency, the UNHCR, and local partners until it was closed in December, with the agency citing security concerns. The tent community sprang up after migrants and refugees were left homeless and lost all their belongings as a result of Libyan security operations.

Eyewitnesses told Middle East Eye that a number of refugees were killed after government and police forces attacked the community, burning down tents and trying to move people to detention centres by force.

Video footage captured by the Refugees in Libya Twitter page appeared to confirm the eyewitness accounts, while a medical team from the International Rescue Committee (IRC) said they had treated one person suffering from a gunshot wound.

They caught everyone off guard, tents at the main office were burnt to ashes, refugees forcibly arrested and taking to the concentration camps of Ain Zara. We understand that the CDC was closed but why those at @UNHCRLibya office got violently rounded up?@Refugees @hrw @JFCrisp pic.twitter.com/4f1yBv5SMT

Videos taken inside the Ain Zara detention centre showed hundreds of people packed into a single hangar, while the Refugees in Libya account said Sudanese community leaders had been shot in the attack.

Caroline Gluck, from the UNHCR's Libya operation, said the agency is "very concerned about the situation of persons arrested last night and is trying to ascertain their whereabouts now, and provide assistance if needed".

Gluck told MEE the community centre had been closed because its staff had been prevented from accessing the centre by "individuals among the protesters". The UN agency refers to the migrants camping outside the centre as "protesters" and there have been reports of an almost total breakdown in trust between international aid agencies and asylum seekers trapped in Libya.

At the same time, the UN agency finds itself caught between the restrictions imposed on it by Libyan authorities, the varying needs of the migrant communities who have few other sources of aid, and the European countries that would rather sub-Saharan refugees stayed on the African continent.

"UNHCR remains committed to supporting asylum seekers and refugees in Libya, including those who had been protesting," Gluck told MEE. "We had regularly engaged with protest leaders to understand the situation, clarify what UNHCR could and could not do, and to address their concerns and needs."

The Norwegian Refugee Council (NRC) and the International Rescue Committee said they were "alarmed" by the overnight detention of the migrants.

"Witnesses have told us they were met with violence this morning and that makeshift tents were burnt down," said Dax Roque, Libya country director for the NRC.

"This is the culmination of a disastrous situation that has deteriorated over the last few months. Since the mass detention of thousands of migrants, refugees, and asylum seekers in October of last year, the situation for this population in Libya has only got worse.”

Hundreds of migrants in the Gargaresh neighbourhood of Tripoli were arrested last October as part of a crackdown on supposed drug and alcohol dealers.

At the time, Libya's interim Prime Minister Abdul Hamid Dbeibah hailed the "interior ministry heroes" who implemented the mass arrests, while groups including the NRC condemned the arbitrary detention of a group of people that included women and children.

Speaking about Monday's violence, Thomas Garofalo, director of the IRC, said: “Our medical teams have been supporting those injured during this morning’s arrests, including one person suffering from a gunshot wound. We understand that hundreds of people, including many women and children, have now been sent onwards to detention centres where conditions are often already dire.

"As we enter a new year, the events unfolding should act as yet another reminder that the current situation for migrants and refugees in Libya is untenable and requires a new approach that respects the rights of people on the move."

Refugees from sub-Saharan Africa told MEE the situation they face in Libya is becoming ever more dire, with the attack on their makeshift tents the latest and most dramatic expression of that reality. One refugee said they felt as though they had been abandoned by the international community and the UNHCR.

Alexandra Saieh, Libya advocacy manager for the Norwegian Refugee Council, told MEE that "the operational environment for humanitarian agencies in Libya has been extremely difficult and it has become more difficult since the mass arrests in October."

On 23 December, Mohamed al-Khoja, a militia commander who previously ran Tripoli's Tariq al-Sikka prison, where reports of rape, beatings and extortion were commonplace, was confirmed as the head of the Directorate for Combating Illegal Migration (DCIM).

The DCIM manages the detention centres that hold many of Libya's migrants and refugees.