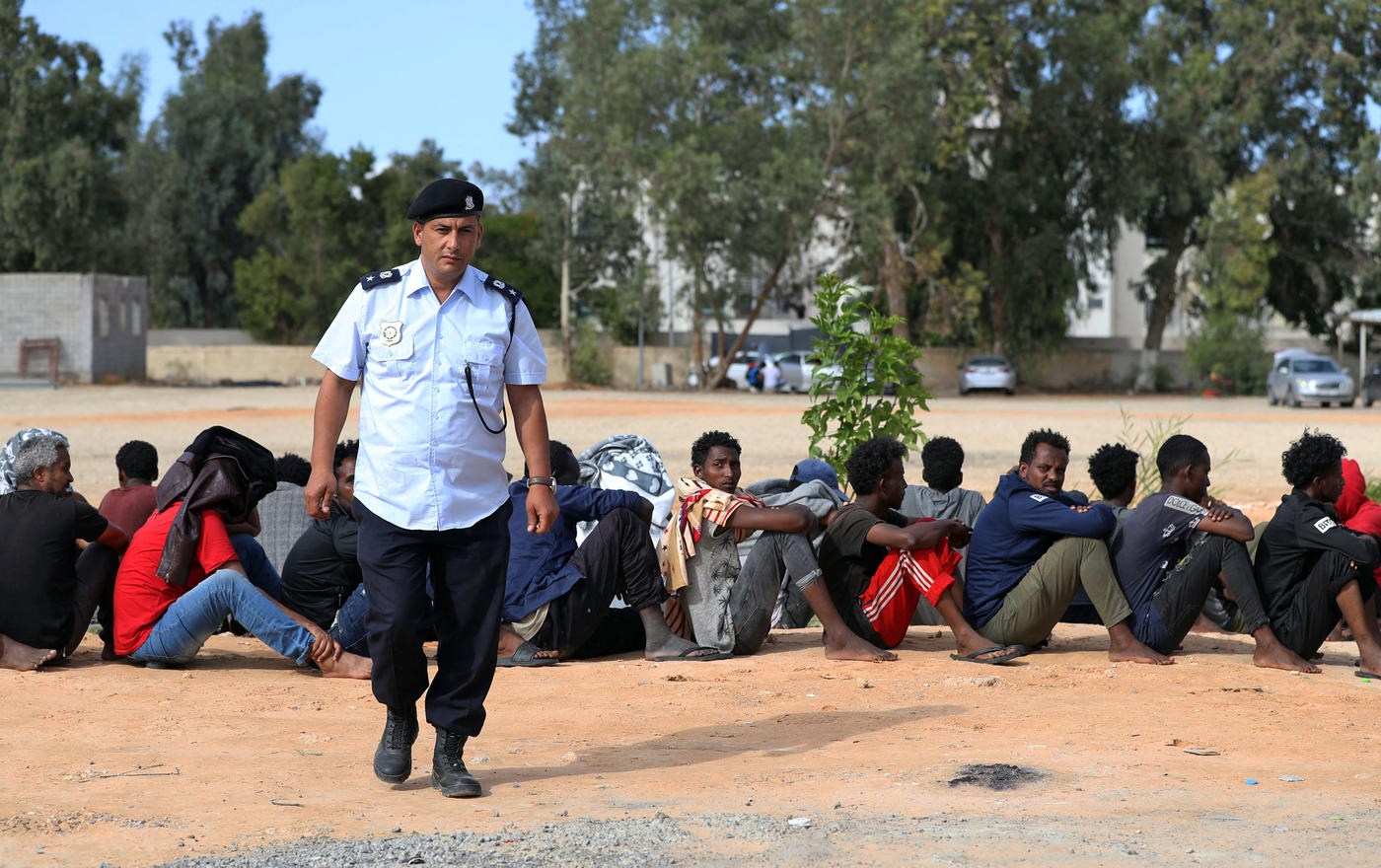 Migrants gather at a makeshift shelter in the capital Tripoli's suburb of Ain Zara, on 11 October 2021 (AFP)
By
MEE staff

Libyan security forces used "unnecessary and disproportionate" force to detain African migrants, shooting dead some of those trying to escape, the UN human rights office has said as it demanded an inquiry into the violence.

Hundreds of migrants and refugees have waited outside a United Nations centre in Tripoli in recent days to seek help in escaping Libya, after what aid groups called a violent crackdown in which thousands were arrested and several were shot.

Migrants and asylum seekers, some of whose claims are pending, have been targeted by heavy-handed operations by Libyan security forces, UN human rights spokesperson Marta Hurtado told a UN briefing in Geneva on Tuesday.

"These have resulted in killings and serious injuries, a rise in detentions in appalling conditions, as well as expulsions of individuals to countries in sub-Saharan Africa without due process," Hurtado said.

Libya's Government of National Unity has said it is "dealing with a complex issue in the illegal migration file, as it represents a human tragedy in addition to the social, political and legal consequences locally and internationally".

Ministry of Interior officials first raided an informal settlement of hundreds of migrants and asylum seekers in Gergaresh, west of Tripoli, on 1 October - handcuffing, arresting and shooting or beating those who resisted, Hurtado said. Some 500 migrants managed to escape from the Gheriyan detention centre in Tripoli on 6 October and "were chased by guards who opened fire using live ammunition", killing at least four and wounding others, she said.

Two days later, another mass escape took place from al-Mabani centre, with migrants chased by security officers who shot and killed an unknown number, she said. The head of the UN migration agency IOM in Libya said at least six people had been killed.

"We call on the authorities to establish prompt, thorough, impartial and independent investigations into the claims of unnecessary and disproportionate use of force including the allegations of killings by the security forces and affiliated armed groups, with a view to holding those responsible accountable," Hurtado said.

The UN's remarks came as at least 15 migrants died while attempting to cross the Mediterranean Sea from Libya's shores, the country's coastguard said.

In a statement on Tuesday, the coastguard said it had responded to a distress call on Monday related to a wooden vessel carrying migrants and that its forces brought 140 survivors and the bodies of 15 men back to a naval base in the capital Tripoli. It said all of the survivors had been handed over to the police.

In two separate statements, the navy said another 165 migrants had been intercepted and brought back to shore on the same day.

Libya has been mired in chaos since its 2011 revolution and is one of the main departure points for tens of thousands of migrants, mainly from sub-Saharan Africa, hoping to reach Europe.

Official centres for migrants detained in Libya are riddled with corruption and violence, including sexual assault, according to the United Nations and rights groups.