The three power houses in the country have all had their sights set on the capital, with each enjoying backing from external powers 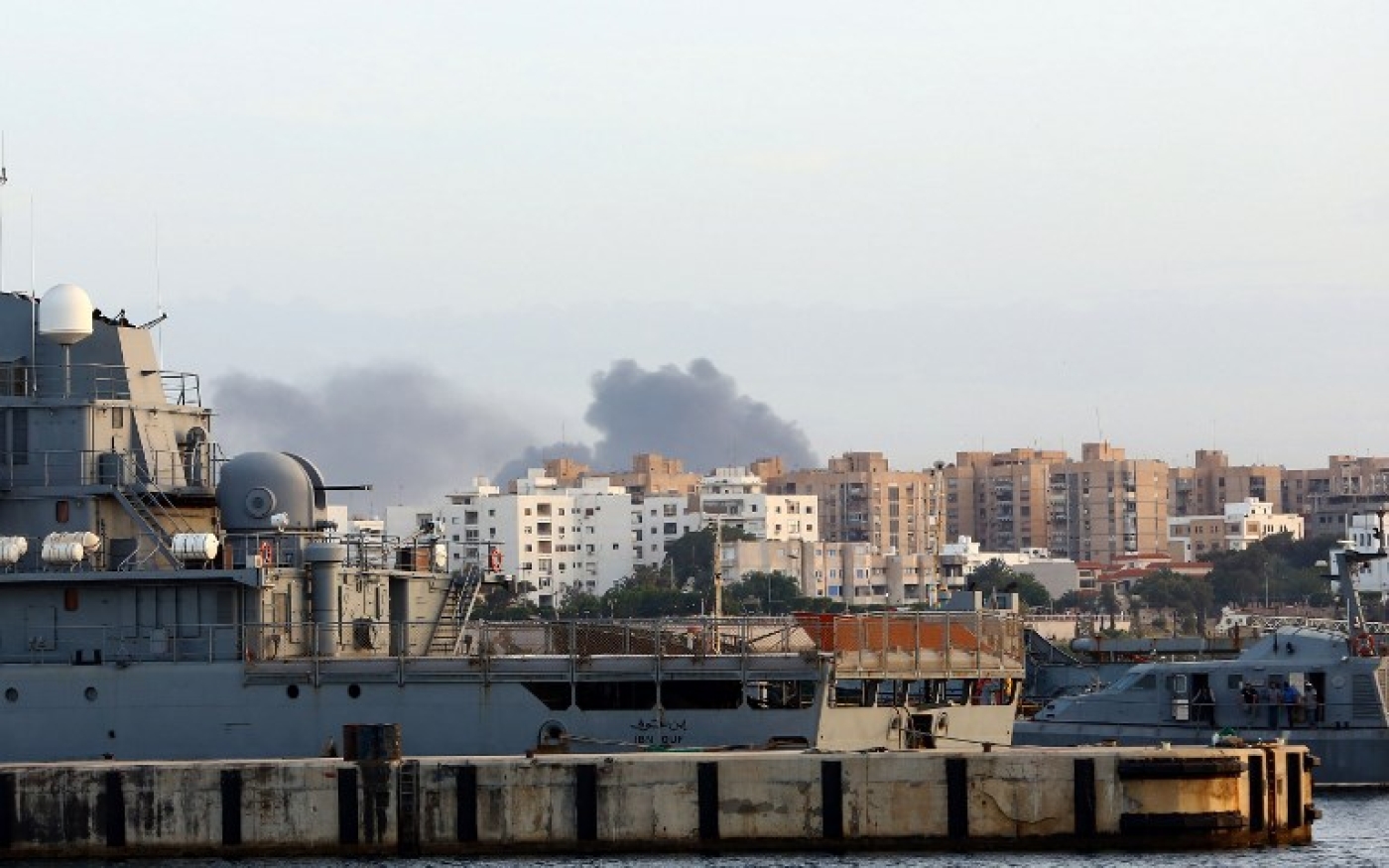 Smoke rises in the centre of the Libyan capital of Tripoli after clashes on 26 May 2017 (AFP)
By
Shaban Omrani
, Nadine Dahan

As chaos reigns in Libya, with competing authorities continuing to vie for power, the battle for Tripoli appears to have begun anew.

Clashes broke out earlier this week, in the east of the capital city, between forces loyal to the UN-backed Government of National Accord (GNA) and those loyal to the National Guard of the Salvation Government (SG).

The capital is an important target for warring sides in the region, offering control over strategic assets such as the Libyan Central Bank, the air and sea ports in the city, as well as all other institutions.

The Garabulli region, where the clashes took place, is considered a strategic gateway into the city, and fighting there may have been intended to be the start of a wider battle.

"The clashes in Garabulli are the demonstration that the forces that coalesce around the National Salvation Government ... will not give up easily, despite the repeated military defeats they have suffered," Mattia Toaldo, senior policy fellow at the European Council on Foreign Relations, told MEE.

The clashes left at least four dead and over 20 injured, according to the UN-backed government's health ministry, with the SG forces being pushed further from the city.

The UN-backed Presidential Council (PC), which presides over the GNA, is headed by Fayaz al-Sarraj, a figure who has remained controversial since his entry into Libya in March 2016.

The Government of National Accord has met resistance from many groups, including some of those involved in these latest clashes.

Each of the parties is being steered by external governments. They are each backed by different countries, and the war they are fighting is not just a war between Libyans

Both sides have accused the other of starting the battle, with the pro-GNA side accusing the SG-linked forces, which had been positioned in the Garabulli region, of embarking on an attempt to advance into the capital, while the SG forces say the GNA did the provoking.

The National Guard of the Salvation Government receives most of its support from militias from the city of Misrata, about 200km east of Tripoli. It has been accused of supporting the Muslim Brotherhood, accusations which it has denied.

Whilst the international community recognises the Government of National Accord’s PC as the representative body of the country, the country is split in its support three main ways.

The PC, based in the country's western capital city Tripoli, was welcomed by much of the population with great optimism, taking over as it did during a time of great financial crisis and instability.

However, over the year and four months in which it has been somewhat in power, public support for al-Sarraj and his government has plummeted. 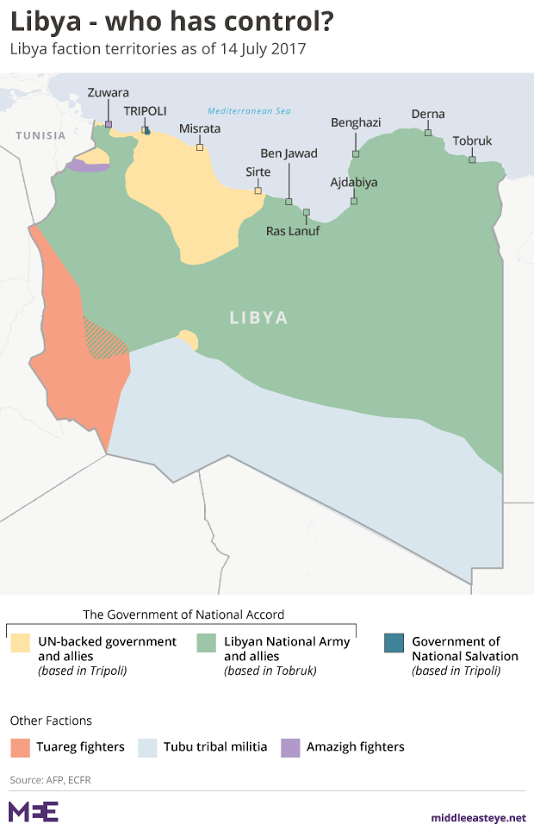 Next is the Government of National Salvation, which presides over the General National Congress elected in 2012, and which is also in Tripoli.

Finally, there is the third grouping in the east of the country, comprising various authorities, including military forces loyal to general Khalifa Haftar and the House of Representatives.

All three have failed to engage in successful peace-making efforts, while Haftar has repeatedly issued threats that his forces would soon take over Tripoli, most recently in May.

Is the battle for Tripoli a proxy war?

The three power houses in the country have all had their sights set on the capital, with each enjoying backing from external powers.

The UN-backed GNA has the support of the United States and most of the international community, and is recognised as the only representative government, but Tripoli has been rife with clashes and instability ever since the GNA came into the city last year.

The government in the east has the support of the UAE, Saudi Arabia and Egypt, with the UAE breaking an arms embargo by supplying Haftar's forces with military supplies, according to the UN.

All of these parties want to control the capital, observers say, and all of the assets within it and surrounding it, including oil ports; claiming Tripoli would be the first step to controlling the rest of the country.

Accusations have also been made, by the UAE and others, against the SG that they are supported by Qatar and Turkey.

A Libyan political analyst who prefers to remain anonymous told MEE that "each of the parties is being steered by external governments. They are each backed by different countries and the war they are fighting is not just a war between Libyans. It is a war for the benefit of these external bodies."

The Ministry of Health announced in a statement on Sunday that all public hospitals in and around the capital were in a state of emergency, anticipating a spike in patients as a result of the clashes over the past four days.

In addition, examinations have been disturbed, with Education Deputy Minister Adel Jumoa announcing the suspension of exams in schools in the Garabulli region, adding that the suspension would remain in place until stability and security in the district is restored.

Students in years 9 and 12 are currently sitting decisive exams, the results of which determine whether or not they will move onto the next stages in their education, high school and university respectively.

This disruption has caused serious inconvenience for many students.

A student, Amirah, living in the area described the feeling of instability that the violence had caused.

"Year 12 exams start on Sunday, and I'm still not sure if we will sit them or if they have been moved. I really hope they go ahead as planned. I want to study medicine and entry into university relies on these exams."

Following a blackout affecting most of the western region of the country last week, which left many without electricity and in some cases without running water for days, these clashes could result in a "full shutdown of the grid," according to the General Electricity Company of Libya (GECOL).

GECOL stated that the clashes had caused damage to power lines linking key generating stations, adding that the damage had led to a loss of power in both plants.

Power outages in the country, combined with high temperatures, have led to fatalities. Last week, temperatures reached 47 degrees in the capital, having a devastating effect on the elderly and sick, as well as causing food waste, which contributes to food-price inflation.

"Ultimately, for the SG militias there are only two alternatives: either fighting until they are physically eliminated in a series of battles or [until they] negotiate a place at the table for the management of the capital," Toaldo said.

But, he added, the battle was about more than the capital alone.

"The battle is about Tripoli but not only about Tripoli: it is essentially about the survival of the SG militias that are excluded by the syndicate that manages the capital," Toaldo said, referring to the GNA-backed militias. 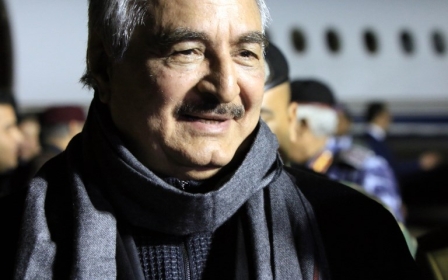