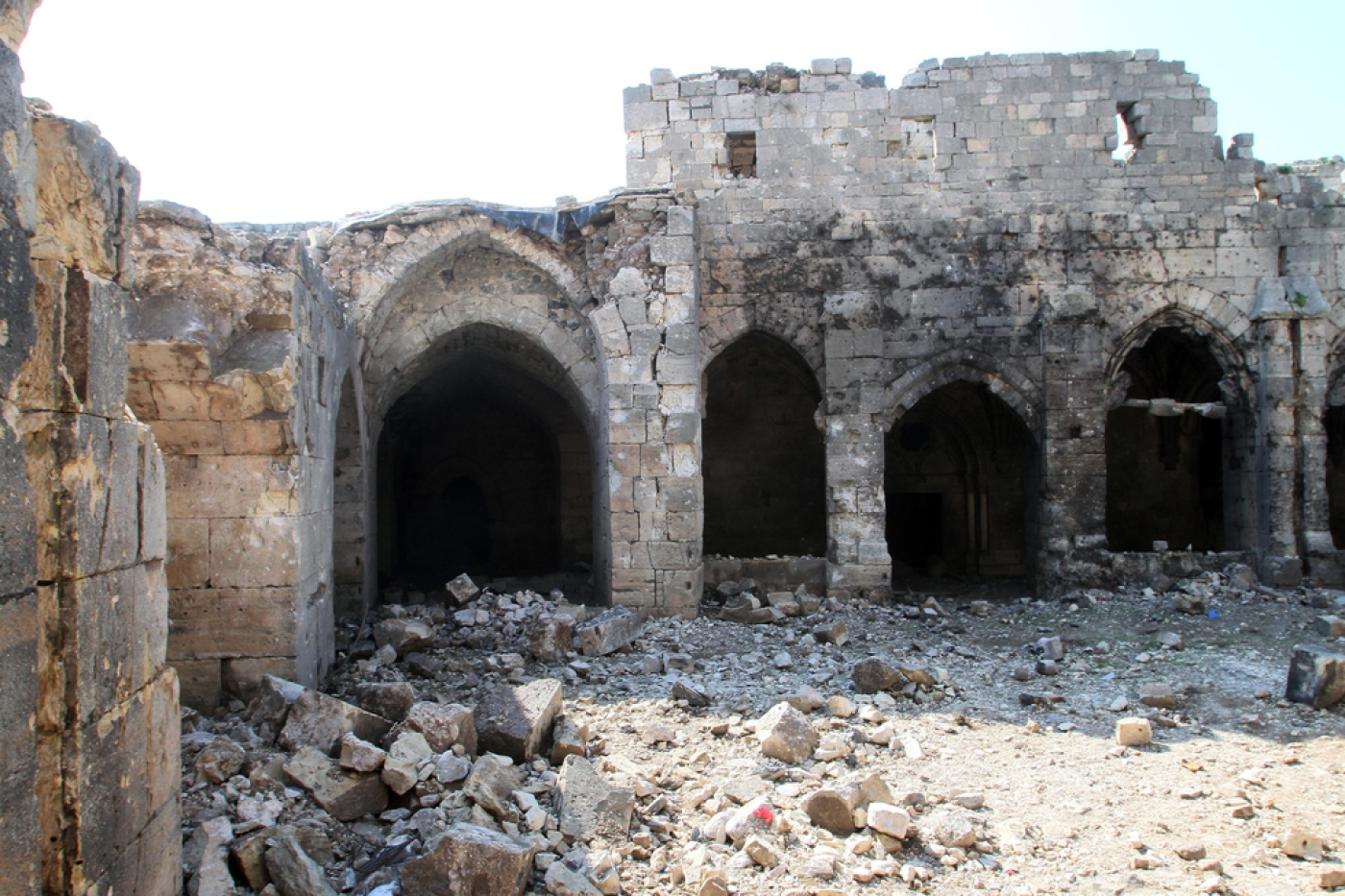 The fifth-century monk Saint Simeon Stylites spent the last 30 years of his life atop an 18-metre pillar in Syria, practising strict self-denial and escaping admiring hordes.

But last week the legacy of the hermit - whose extreme example of asceticism meant he ate only once a week - was destroyed in an air strike.

“The damage is significant. What was left of St Simeon’s column was knocked off its pedestal,” said Amr al-Azm, a member of the Syrian opposition co-ordinating efforts to document damage to the country’s heritage.

Two rounds of air strikes hit the Church of St Simeon Stylites northwest of Aleppo, which became the heart of the “stylite” self-mortification movement.

“The nave and three arches were all damaged,” al-Azm told MEE. Four rockets hit the site on the night of 12 May. They were followed by two strikes the next afternoon.

Images showed cavernous holes blasted into the ground and rubble falling from the church remains.

The complex - Qalaat Samaan in Arabic - is part of the ancient villages of northern Syria, designated a UNESCO World Heritage Site in 2011.

“These guys know what they are looking at and confirmed it was definitely a Russian strike,” said al-Azm, a former director at Syria’s Department-General of Antiquities and Museums.

President Bashar al-Assad’s government trumpeted its recapture of Palmyra from Islamic State (IS) fighters in March. But as the damage at St Simeon’s church shows, destruction of heritage sites by multiple parties in the Syrian conflict has quietly continued.

The museum at Maarat al-Numan, home to a remarkable collection of mosaics, was struck last week for a second time. It suffered extensive damage, including shattered walls and exhibits when government helicopters bombed it last June.

“These are not sites on the battle frontlines - they are far away from that,” said al-Azm, who now directs the heritage protection initiative at The Day After, a Syrian civil-society organisation.

“The reason they are hit is because the regime is targeting civilian populations, to terrorise them.”

The Archaeological Museum of Idlib was also damaged last week when government forces carried out three strikes nearby.

The museum, hit by mortar shrapnel, had already been emptied of its collections by looters or government staff storing precious objects for protection. Before the war, the collection was famous for its 17,000 Ebla tablets, a collection of stones inscribed in Sumerian with early references to the Canaanite people.

Because parts of Idlib province are controlled by Ahrar al-Sham and the al-Qaeda-linked Nusra Front, they are deemed excluded from the ceasefire agreement brokered in February.

Cheikhmous Ali, from the Association for the Protection of Syrian Archaeology, said that the media and organisations like UNESCO were more concerned with heritage destroyed by IS than any other party.

“Up until now, UNESCO has not reacted to the aerial bombardment of the important museums at Idlib and Maarat al-Numan. The Western press doesn’t really talk about this type of destruction because it hasn’t been carried out by IS.”

Although the government has boasted of efforts to preserve Syria's heritage, observers are sceptical. When Syrian army troops and Russian allies recaptured the Greco-Roman site of Palmyra from IS, experts from the State Hermitage Museum in St Petersburg promised to help with restoration efforts.

The win was of enormous propaganda value for Assad, allowing him to portray his government as a saviour of civilisations in Syria past and present.

One of Russia’s leading conductors led a concert of classical music played by St Petersburg’s Mariinsky orchestra in Palmyra’s amphitheatre. President Vladimir Putin was on video link from Moscow, congratulating the operation that “liberated Palmyra”.

But Diana Darke, an expert on Syrian culture and the author of My House in Damascus: An Inside View of the Syrian Crisis, said the sight was a laughable example of stage management.

“It was clear most of the audience was made up of Russian soldiers,” she said.

“They don't care about its historical value. It is simply a useful spot for them, strategically and propaganda-wise.”

Russia has installed military equipment within the Palmyra archaeological site, which “made a mockery” of the idea they were protecting it, al-Azm said.

Satellite imagery released by the American Schools of Oriental Research (ASOR) appeared to show a helicopter pad and military equipment inside the northern necropolis area.

According to al-Azm, “driving heavy military vehicles there will cause so much damage”.

Five of Syria’s six UNESCO World Heritage Sites - the Old Cities of Aleppo and Bosra, Krak des Chevaliers Crusader Castle, the Dead Cities of the north, and Palmyra - have suffered “significant damage” since the beginning of the conflict in 2011.

That is according to a 2014 report from the American Association for the Advancement of Science, which used satellite imagery to assess the damage to the six World Heritage Sites.

Some of the most worrying examples of destruction include the toppling of the Great Mosque of Aleppo’s Mamluk minaret, dated to 1090 AD, and the obliteration by fire of the city’s souk in 2012.

“Destruction is visible throughout [Aleppo’s Old City],” the report said.

“Debris is present across the area and blocks of structures have been reduced to rubble. The destroyed structures include historic mosques and madrassas, government buildings, and civilian structures.”

Darke said the extent of damage to the Roman theatre at Bosra was “particularly poignant” after it was attacked by government forces last year.

“Bosra was taken from the regime in March 2015 by a group of rebels who set up their own ‘revolutionary’ antiquities department led by a local history teacher. They vowed to protect the site from a fate similar to what happened to Palmyra after the IS capture - only to have the regime barrel-bomb it.”

The Old City of Damascus, which remains under tight government control, has remained mostly unaffected. Damage to the Great Umayyad mosque from stray mortars in 2014 was repairedalthough a fire that ripped through the Hamadiye souk last month caused widespread destruction of shops.

But UNESCO-designated sites are not the only ones to have suffered. AAAS updated its research this February to analyse damage to six lesser-known but significant sites.

Dura Europos - the “Pompei of the Desert” - sits in IS-controlled territory on the Euphrates River in western Syria, and has been subjected to “extremely heavy looting” according to AAAS analysis.

“Inside the ancient city wall the disruption was so extensive that counting of individual looting pits was impractical,” a report said.

The group estimates that an area of 38 hectares within the 140-hectare site has been “completely destroyed” by relentless theft.

Meanwhile, Ebla, the site of an Early Bronze Age kingdom in Idlib province, has been the scene of violent fighting, and occupied by both armed rebels and Syrian government troops. AAAS reported the construction of earthen berms and vehicle tracks within the site, and “substantial looting”.

Indeed, while air strikes and rockets have caused some of the most visually shocking examples of damage to cultural heritage, looting of antiquities remains the more silent danger.

“The real damage is from lootings,” al-Azm said. “At Palmyra, pieces looted when the Syrian army was in charge have turned up in Idlib, while objects taken by IS have been put on auction in Raqqa [the group’s de-facto capital]. The dealers work with the regime or with IS – for them, it’s business.”

“Looting is a very widespread phenomenon in all parts of Syria,” said Jesse Casana, a specialist in Near East settlement and chair of ASOR’s Damascus Committee.

“We can see a strong association between military occupation of Assad forces and looting.”

Of the 1,200 sites ASOR has studied, as many as a quarter showed signs of minor looting. Some important sites such as Apamea, a stronghold of the Seleucid Empire on the Orontes River in western Syria, and Ebla, have been heavily looted. In the worst cases, they have been ravaged with thousands of holes and effectively destroyed.

There is little information available about objects once they have been stolen.

“They could be in middle states with middlemen in warehouses, but we cannot say for sure,” he added. He said vendors would be wary of flooding the market, “although there has been an uptick in items appearing on online auction sites. The difficulty is knowing whether the items are from Syria, or whether they were looted in Iraq 10 years ago, for example.”

Efforts to preserve what is left

While the difficulties of life for civilians in Syria means resources are limited, small networks of people are attempting to curb the damage to heritage and archaeological sites.

Syrians in Idlib province estimate that almost 500 of 700 structures have been damaged, many within the UNESCO-protected Ancient Villages area.

A group of locals is now working to protect sites and teach residents about the importance of ancient settlements.

A spokesman for Lawyers for Justice in Kafranbel, a rights group, told MEE his organisation was protecting sites from “tampering and vandalism” by co-ordinating with locals, police and civilian councils.

Elsewhere, $60,000 has been donated to The Day After’s heritage division to protect at-risk sites, including the Maarat al-Numan museum.

“We sandbagged the site, and the only reason mosaics have survived is because they were protected in this way,” said Amr al-Azm.

Still, some find it difficult to remain optimistic. “The multiple cases of destruction and looting are a catastrophe for both humans and heritage,” said Ali of the Association for the Protection of Syrian Archaeology.

St Simeon is said to have remained on his column unnoticed for three days after he died in 459 AD, such was his separation from any form of community. Archaeologists hope Syria’s historical legacy will not be overlooked so easily. Islamic State
IS netting up to $200m a year from illegal antiquities sales: Russia 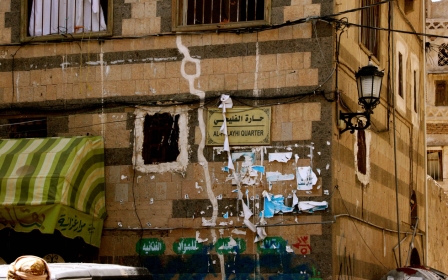