From Morocco to Iraq, we bring you our favourite photos so far This year, we have brought you pictures from across the region. Some have been harrowing, others uplifting, but we hope they helped bring a small slice of what life was like in the Middle East in 2014.

While there have been so many photos that deserve mention, here is a small selection of what the MEE team loved in 2014.

The picture is of a Palestinian girl mourning her baby brother, who was killed in an Israeli attack on the Gaza Strip in July (Anadolu Agency).

The photo not only sheds light on the horror of having many child deaths as a result of the offensive, but it also draws our attention to the trauma inflicted on the children who survived. We can only try to imagine what her eyes are seeing, but how that will affect her life afterwards is something even she does not know yet.

This photo by Oren Ziv was taken at the height of the turbulence that rocked East Jerusalem in late October and November. I felt it captured the youthful nature of the protests and managed to show the tense situation unfolding on the ground.

This is one of the most memorable and heart-breaking photos of 2014 for me. It was taken in the Yarmouk refugee camp. The photographer, Laila Benallal, told me that the man in the centre is a medic who was carrying the sick baby of the woman you can see crying behind him.

The baby had not had any food or water for three consecutive days at this point and when the doctor tried to feed it a mixture of water and dates, the baby hardly could gulp and started retching. This single snapshot captures the pain and desperation in the mother’s face as she watched her child fade away, the limp body of one of the young victims of the siege, the physical destruction of the besieged refugee camp in the background, and the heroism and stoicism of those trying to help.

This article appeared in MEE’s 24 June photo gallery - In Pictures: Life and death in Yarmouk

So often, our coverage focuses on the latest political developments, so these photos by Shadi Rahimi, who sought to cover a lighter side of life in Morocco, was a breath of fresh air. The lighting helps to provide a distinctly Mediterranean feel that also helped to showcase Morocco’s bustling hip hop scene that is extremely popular with local youth.

This image by Sebastian Backhaus was taken for MEE during the refugee exodus from a Syrian Kurdish-majority town in Kobane in the wake of an Islamic State (IS) group assault.

The striking and gut-wrenching photo personifies what history has repeatedly taught us: that not even the elderly are spared the cruelties of war. Worn from war and exhaustion, adorned with symbolic tattoos that speak hundreds of enigmatic stories in themselves, she grasps onto an unidentified man, a last remaining connection to a world which has forced her to be caught between life and death, fear and hope. Her raw fragility and timeless innocence invite one simple question: why? I learned recently the disheartening news that this woman did not likely survive, but her image will not be forgotten.

This photo taken by Mohamed Asad both summarises the incredible resilience of Gaza’s youth living in the most precarious of circumstances and is also a perfect reflection of our increasingly internationalised world.

While coverage of the Middle East usually tends to focus on conflict, disasters and wars, this photo gallery gave us some insight into people’s daily lives. The smiles of the local community captured by Salah Malkawi as they celebrate the harvest of the pomegranate, illustrates that away from politics, there is a lot to appreciate about the Middle East and its people.

The picture appeared in MEE’s 20 October - In Jordan, celebrating the pomegranate

The small village Erriadh on the Tunisian island of Djerba was transformed into an open-air graffiti museum this summer, with the hope that the exhibition of various artists would lure tourists from all over the world.

This photo by Christine Petre was just one of the many murals that sprung up over the island of Djerba.

The picture appeared in MEE’s 30 October article - Can an open-air graffiti museum lure tourists back to Tunisia? 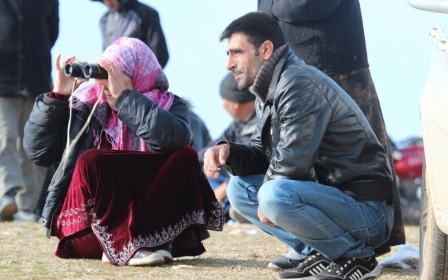 Predictions: What will shape the Middle East in 2015?