The defence for ousted Egyptian president Mohamed Morsi filed an appeal against a death sentence and prison term for the former leader, a lawyer said on Saturday.

Morsi, who was toppled in July 2013, was sentenced to death in June for allegedly participating in prison breaks and violence against police, and to life in prison for espionage in the form of allegedly giving away state secrets to Qatar.

“We submitted an appeal to the court of cassation to all prisoners sentenced, including Morsi,” said his state-appointed legal representative Abdel Moneim Abdel Maqsud.

Morsi was detained without charge during the initial days of the 2011 uprising against the country’s veteran leader Hosni Mubarak, and escaped along with thousands of others after protesters attacked police stations across the country.

He faced no legal action for leaving the prison either before or during his tenure as president, which began in June 2012, but was detained following his overthrow.

Morsi has not appointed a lawyer to defend him and has refused to recognise the legitimacy of the court proceedings, saying he remains Egypt’s legitimate president. The Muslim Brotherhood organisation from which he hails, however, is represented by international human rights firm ITN which has widely protested against the mass trials, arguing that they do not meet even the most basic international standards.

Hundreds of Muslim Brotherhood members have been sentenced to death in a crackdown following Morsi’s overthrow. Most have won retrials.

The group was outlawed in 2013 and declared a terrorist organisation by the government.

Seven have been executed, including six defendants sentenced to death by a military court for allegedly participating in militant attacks. 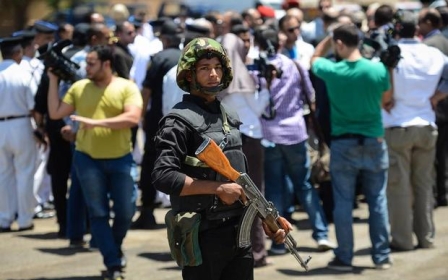