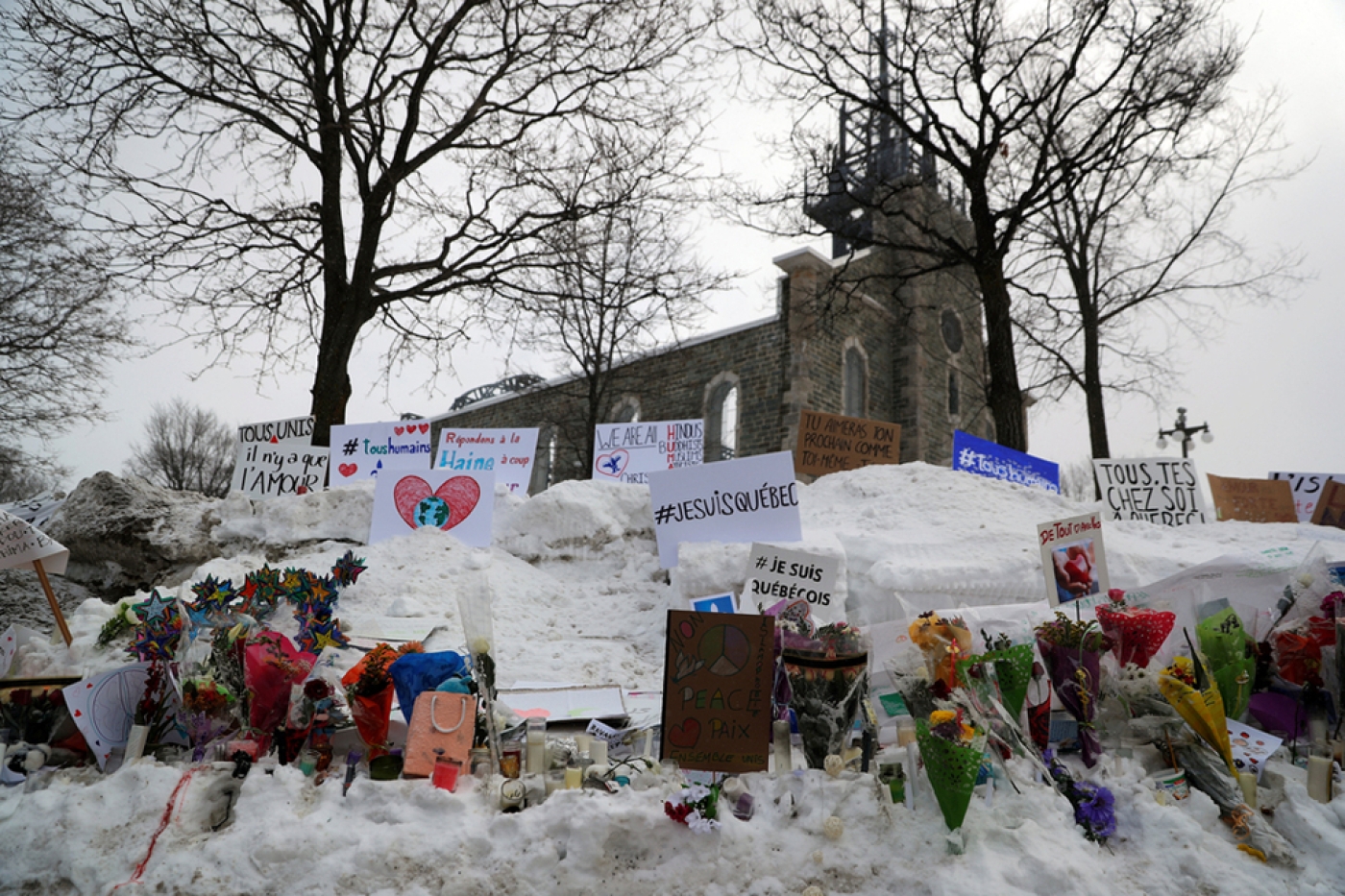 TORONTO, Canada – Muslim community groups across Canada have joined forces to encourage the government to take steps to combat Islamophobia in the aftermath of a deadly attack at a Quebec mosque.

The organisations called on the Canadian parliament to designate 29 January the National Day of Remembrance and Action on Islamophobia, in honour of the six men who were killed late last month at the Centre Culturel Islamique de Québec.

“How do we move on from this heartbreaking event and ensure that we learn lessons from this tragedy? How can we work harder to stamp out hate – against anyone, for any reason – in our communities?” the organisations said in an open letter released on Wednesday.

“Now is the time to take meaningful steps forward in order to combat Islamophobia collectively,” they wrote.

Demands at all levels of government

Among several demands, they want municipalities across Canada to receive training on hate crimes and “bias-neutral” policing, and release an annual report on hate crimes in their area.

At the provincial level, the groups want education ministries to create a mandatory high school course on systemic racism, including Islamophobia, anti-Semitism, xenophobia and anti-black racism.

They also want each province to implement an Anti-Racism Directorate to evaluate systemic racism at the government level, and promote anti-racism public awareness campaigns.

Parliament members have also been urged to support a motion in the House of Commons that would push the federal government to study how to stem systemic racism and religious discrimination.

“We’ve seen recently that Quebecers went out into the streets… to say enough is enough,” said Haroun Bouazzi, of Montreal human rights group AMAL-Québec, one of the letter’s signatories.

“We think it’s the time to work together,” he said during a news conference in Ottawa on Wednesday.

Bouazzi said that while Islamophobia is not more of a problem in Quebec than elsewhere in Canada, it manifests itself differently in the French-speaking province, largely because of Quebec’s unique history.

“We absolutely have to give our students the tools to understand what is essential – what racism is, what decolonisation is, what sexism is – what all these very important concepts are, in order to create good citizens,” Bouazzi said.

Last week, Alexandre Bissonnette, 27, was charged with six counts of murder, and five counts of attempted murder, in the shooting at the Centre Culturel Islamique, also known as the Grand Mosque of Quebec.

Rallies in solidarity with the victims were organised across Canada to mourn the men who were killed, and public funerals drew thousands to Montreal and Quebec City to pay their respects.

Meanwhile, a march condemning Islamophobia drew thousands of protesters to downtown Toronto on Saturday, and interfaith and other community groups joined hands to form “rings of peace” around mosques in the city last Friday in a show of support for local Muslim communities.

Canada’s Prime Minister Justin Trudeau described the shooting as “a terrorist attack” in which “a group of innocents [were] targeted for practising their faith”.

But no formal terrorism or hate crime charges have been added to Bissonnette’s list of alleged crimes to date.

That is something that Amira Elghawaby, spokesperson for the National Council of Canadian Muslims, said is critically important if concrete solutions to Islamophobia are to be found.

“All we've seen are murder charges, so I think everyone is waiting to hear from the investigators as to what it is. At the bare minimum, it's a hate crime,” Elghawaby told Middle East Eye late last week.

'At the bare minimum, it's a hate crime' - Amira Elghawaby, National Council of Canadian Muslims

“It's critically important to name the acts of violence and to make it very clear as to what we're dealing with here because if we don't name the problem, then we're not going to be able to solve it.”

A debate on accommodation

But communities in Quebec are also bracing for an upcoming debate on a proposed law, Bill 62, which officially aims “to foster adherence to State religious neutrality”.

In practise, the law would force public sector employees to have their faces uncovered at work, and it would apply to anyone working in government agencies, school boards, and public institutions that provide health and social services.

But really, it would affect only a very small minority of Muslim women who choose to cover their faces.

Quebec Premier Philippe Couillard, whose Liberal Party put forward the bill, said this week that the tragedy in Quebec City should not take away from the secularism debate in the province.

Indeed, “it will take more than a tragedy to recast the accommodation debate along lines more respectful of minority rights,” Quebec political affairs columnist Chantal Hébert wrote in The Toronto Star last week.

Bill 62 “is the latest legislative proposal designed to bring closure to the religious accommodation debate,” Hébert wrote, but “it will do anything but that”.

The question of state secularism has bubbled to the surface many times in more than a decade in Quebec, as has the extent to which the province should provide “reasonable accommodation” for religious minorities and new immigrants.

Incendiary radio hosts, whose shows are referred to as “trash radio,” or radio poubelle, and alarmist newspaper columnists have been accused of promoting hate that targets Muslim communities.

Politicians have also been guilty of stoking the flames, with Parti Québécois leader Jean-Francois Lisée proposing in September for Quebec to ban the burqa and the niqab in public places.

The Coalition Avenir Québec, meanwhile, has advocated for values testing for new immigrants, and to join some cities in France in banning the “burkini,” the full-body swimsuit worn by some Muslim women.

“Quebec Muslims have long complained of being treated like second-class citizens, so there's definitely a climate in Quebec. And there is a climate in the rest of the country,” Elghawaby said.

During the 2015 federal election, the Conservative Party staked its campaign on banning new Canadian citizens from being allowed to take their oath of citizenship while wearing a niqab, a full face covering.

Conservative MPs also proposed a “Barbaric Cultural Practices” tip line, a thinly veiled attempt to get Canadians to report on the activities of their Muslim neighbours.

In November 2015, about a month after the election, a mosque in Peterborough was set on fire in a suspected hate crime.

Between 2012 and 2014, anti-Muslim hate crimes doubled across Canada as a whole.

But those statistics only tell “part of the story,” Elghawaby said, “because up to two-thirds of hate crimes are not reported”.

She said that police services have also not designated many incidents as hate crimes, including a pig’s head that was left on the doorstep of the Centre Culturel Islamique in Quebec City last June.

“When another mosque was torched, practically brought to the ground, community members were told, ‘Well, the perpetrator was drunk, so it's not a hate crime',” she said.

“Which is ludicrous, of course, because obviously he didn't go towards just any building - it was a mosque.”

A brick was hurled through a window and eggs were thrown at a Montreal mosque last Thursday, and city police reported a spike in hate crimes, with 14 reported in no more than 48 hours after the attack.

Elghawaby questioned whether this increase was actually evidence of police taking the issue more seriously, and she said she hoped police would review how they have been handling hate crime complaints up until this point.

“This incident, this attack, nothing like this has ever happened in this country before against any other group. This is historic,” she said.

“And if we don't act proactively to prevent anything like this from happening to any other community or us again, then we will have definitely failed.” 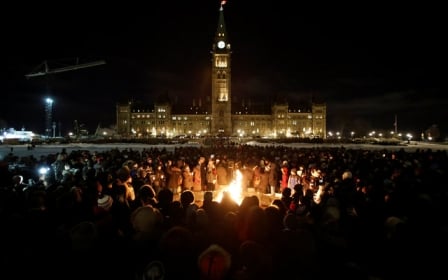 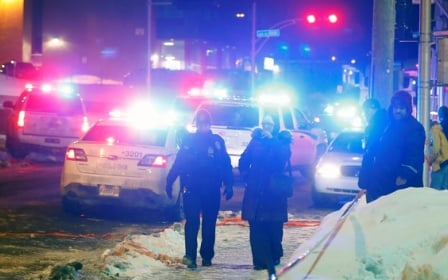