Nazanin Zaghari-Ratcliffe's husband 'disappointed' by UK efforts to free her

Richard Ratcliffe says the battle to release his wife has become a 'test of endurance', as family marks her second year in prison in Iran LONDON - The husband of a British mother who has spent two years in an Iranian jail has said he is disappointed by the failure of Boris Johnson to obtain her release.

Richard Ratcliffe said the battle to set his wife Nazanin Zaghari-Ratcliffe free has become a "test of endurance", after several unsuccessful attempts by the British foreign secretary to secure her release.

Zaghari-Ratcliffe, a British-Iranian dual citizen who is serving a five-year prison sentence after being convicted of spying charges, was arrested at Tehran Airport on 3 April 2016.

Nazanin was told that if she wasn't home by Christmas, at least it should be done by Nowruz, and we should worry if we go past March 2018. And now we have

She denies the charges and her family says she has become trapped in a "political standoff" between London and Tehran. They say she was visiting Iran to introduce her young daughter Gabriella to her parents.

Ahead of the second anniversary of her detention on Tuesday, Ratcliffe said: "We didn't expect to be needing to mark this anniversary - not after the hopes of Christmas and the foreign secretary's word.

"But it remains a cold late Spring. Nazanin was told that if she wasn't home by Christmas, at least it should be done by Nowruz, and we should worry if we go past March 2018, with the storms that might lie ahead. And now we have."

He added: "Our story has become a test of endurance, and there is a need to recharge spirits - particularly after the disappointment of the foreign secretary's mission failing to deliver, and Nazanin becoming caught up in this government standoff - so we wanted the anniversary to be an occasion where we drew positive energy."

Not a laughing matter

The family are holding two events in London this week to mark the anniversary, including an a #ChooseLaughter event in West Hampstead on Monday, where they will hang jokes and "things that make us smile" provided by supporters and prisoners.

They will also hold a "One Night of Freedom" comedy event on Tuesday. Hosted by British Iranian comedian Shappi Khorasandi, it is supported by rights groups Amnesty International and Redress.

Both events had been planned as celebrations, as family members had expected Nazanin to be released following the foreign secretary’s intervention last year. Since then, Richard Ratcliffe, says his wife has suffered "periodic panic attacks".

Tulip Siddiq, Zaghari-Ratcliffe's MP, said: "In November the foreign secretary promised to 'leave no stone unturned'. But since his trip to Tehran, he has been missing in action.

"Nazanin does not have the luxury of time, and Boris Johnson must act before her situation gets worse.

"If he can't deliver on this, then it is time that the prime minister stepped in."

Kate Allen, Amnesty International UK’s director, said: "There’s absolutely nothing funny about what the Iranian authorities have done to Nazanin, but there’s something very powerful about displaying humour in the face of injustice. This isn’t exactly jokes for freedom, but it’s the next best thing."

"On a deadly serious note: Nazanin should be freed at the earliest possible opportunity and she should be allowed to return to Britain with her young daughter on the first available flight."

The key question for her family is whether Johnson has "given up on his promise to bring home Nazanin soon", the Free Nazanin campaign said.

Ratcliffe and his supporters have requested to meet Johnson with lawyers present, to ask what are Nazanin's rights in his view as the standoff continues.

The campaign for Nazanin's freedom said they have previously discussed with the foreign secretary's office that it is false to claim that her case is just a normal consular case. They say the case has political ramifications.

"Given that Nazanin is held for something the government has not done, not because of something she has, the claim she is just another consular case belittles the government's obligations," the campaign said in a statement on Monday.

Treated as an Iranian citizen

But in December officials in Iran said the country would treat the British-Iranian aid worker as an Iranian citizen and that she would serve her full term in prison.

Johnson raised this issue in December when he again met with officials in Tehran, but appeared to make little progress.

"One of the issues that Johnson brought up in Tehran was the issue of Ms Zaghari," Iranian foreign ministry spokesman Bahram Qassemi was quoted by state media as saying.

"With regard to her dual nationality, from our point of view of course she is Iranian and she has been sentenced by the judiciary and she will serve the period of her sentence."

Johnson and Middle East Minister Alistair Burt have repeatedly raised the aid worker's case with Iranian politicans, amid speculation that she is being used by Iran as a pawn in its efforts to extract some $600m owed by the UK since before the 1979 Islamic revolution.

A damaging slip of the tongue?

The case has become highly politicised, especially after a "slip of the tongue" by Johnson in November, when he stated that Zaghari-Ratcliffe had been training journalists in Iran, which has been used by the Iranian authorities to help justify the new charges.

This prompted call for Johnson to resign, after Zaghari-Ratcliffe's employer, the Thomson Reuters Foundation, said she had been on holiday and not teaching journalism in Iran. Johnson was forced to apologise.

The Foreign Office told MEE: "On the second anniversary of Nazanin's arrest we continue to approach her case, and all of our British-Iranian consular cases, in a way that we judge is most likely to secure the outcome we all want.

"Therefore we will not be providing a running commentary on every twist and turn."

Diplomacy
Syria's UN ambassador calls on US to withdraw troops, 'stop acts of aggression'
Diplomacy
Saudi foreign minister says ties with US will be 'excellent' under Biden
France
France vows 'symbolic actions' but no apologies for colonisation of Algeria 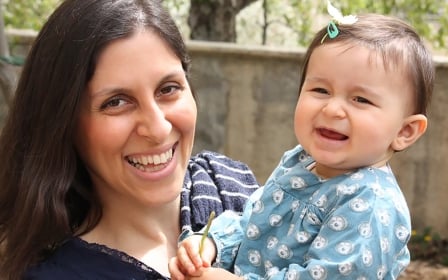