A delegation from Morocco will travel to Israel in the coming week to advance newly normalised relations, Israeli Prime Minister Benjamin Netanyahu said on Saturday.

"We agreed that the Moroccan delegation will come here at the start of the week in order to advance it all," Netanyahu said in a video he posted on Twitter, in which he described his conversation with the king, according to Reuters.

A spokesman for the Moroccan government could not be reached for comment. A diplomatic source speaking on condition of anonymity said the timing and composition of the delegation had not yet been determined.

Netanyahu and Morocco's King Mohammed VI had held a phone call on Friday, during which the Israeli premier invited the monarch for a visit, according to Netanyahu's office. The phone call came three days after an Israeli delegation signed a US-sponsored normalisation agreement with Morocco in Rabat.

"The leaders congratulated each other over the renewal of ties between the countries, the signing of the joint statement with the US, and the agreements between the two countries," a statement from Netanyahu's office said.

"In addition, the processes and mechanisms to implement the agreements were determined," it added.

Four bilateral deals were signed on Tuesday between Israel and Morocco, centring on direct air links, water management, connecting financial systems and a visa waiver arrangement for diplomats. Israel and Morocco are also due to reopen diplomatic offices.

Morocco and Israel began low-level ties in 1993 after an Israeli-Palestinian peace deal was reached. But Rabat suspended relations with Tel Aviv after the outbreak of a Palestinian uprising in 2000.

While Morocco does not have official relations with Israel, earlier this year, Amnesty International reported that Israeli spyware was used by Moroccan authorities to target Moroccan activists.

For years, the Palestinians have said that normalisation with Israel would weaken a long-standing pan-Arab position that only an Israeli withdrawal from occupied territories and acceptance of Palestinian statehood would allow for normal relations with the Arab countries.

Both the Palestine Liberation Organisation (PLO) and Hamas, which controls the Gaza Strip, have condemned the deal, just as they did with the earlier normalisation accords with the United Arab Emirates, Bahrain and Sudan.

Tuesday's signings marked the latest in a series of controversial normalisation agreements brokered by Washington.

As a part of Rabat's deal, the US has agreed to recognise Moroccan sovereignty over the entirety of Western Sahara, a disputed territory that was annexed in 1975 following an end to Spanish colonial rule.

Morocco's claim is not recognised by the United Nations, which has for decades called for a referendum allowing the indigenous Sahrawi people to choose how they want to be governed.

Many neighbouring African nations have also been at loggerheads with Morocco's claim of sovereignty, with Algeria saying the decision would undermine efforts to end the decades-long conflict over the territory. 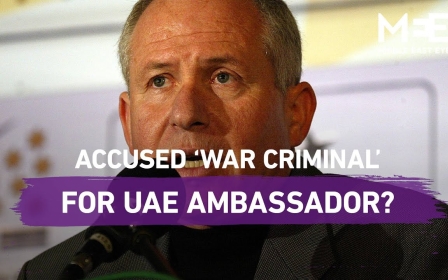