As the submission of election lists shows, Israeli politics boils down to one question: to Bibi or not to Bibi? The popular Israeli ritual called “submit your election lists” ended last night, for the third time in a year.

Some submitted their names fighting for political survival, some just to have their voice heard for a few minutes, while others joined the party just for fun.

Ever heard of a party called “the Pirates”? Now you have, and probably for the last time.

There are several of that kind, formed by people now forever entitled to add “head of party and candidate in 2020 elections” to their bio.

That aside, on both the right and the left there was a real, life-and-death game prior to registration, with fraught unifications and mergers.

It ended at 11.59pm, when short-of-breath party representatives came to register before the doors and the lists closed for good. As of midnight, nothing can be changed.

There is a big difference between the engines of unification on the left and right.

On the right, Prime Minister Benjamin Netanyahu almost single-handedly imposed unions in an attempt to unify the right in one hermetic structure; on the left, unity came by the popular demand of the diminishing left’s supporters.

Ideology? A foreign notion. That is how it looks when the centre left preaches “just not Bibi” and the right claims “only Bibi”, as the premier is commonly known.

Survival is the name of the game: Netanyahu’s personal political survival and the survival of the flagging left as relevant political entity.

To Bibi or not to Bibi, that is the question. 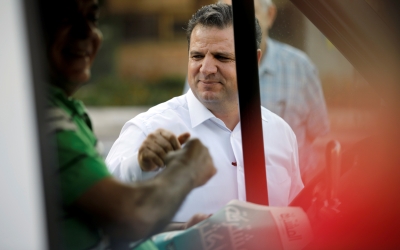 Racism and regret: Palestinians in the Galilee mull voting in Israel
Read More »

In a cynical political twist, the Palestinian Joint List - the slate whose politicians were recently defined by Netanyahu’s Facebook page as those who “want to annihilate us” - has become the exemplary role model.

With the far-right parties taking their unification negotiations to the wire, amid much acrimony, Likud members pointed to the Joint List as a perfect example of political wisdom – politicians who managed to unify for their people despite their many differences.

Submission of the lists and the process of registration are much more than just technical steps towards elections in March.

In the midst of political chaos, it is hard to decide what is more telling and more alarming: the newly formed party of Larissa Trimbobler, the wife of Yitzhak Rabin’s jailed assassin Yigal Amir; or the fact that Netanyahu kept single-handedly plotting ways to bring Meir Kahane’s racist disciples onto one of the lists.

Both, by the way, share legal motivation. Trimbobler’s party agenda is to get a retrial for her husband, as she said upon filing the forms to register her party.

The name she chose for the party is Mishpat Tzedek - Fair Trial in Hebrew.

Facing a raft of corruption charges, Netanyahu, meanwhile, needs one strong national-religious right wing to secure an “immunity coalition” that can keep him away from the wrath of the law.

He failed to do so in two previous election rounds; the timing is crucial for him.

Until the very last moment before registration closed, he made intense efforts to bring Kahanist Otzma Yehudit (Jewish Power) and far-right Jewish Home into  a union with Defence Minister Naftali Bennett’s New Right.

He even threatened to fire Bennett from the position he coveted for so long, telling him he won’t be able to continue as defence minister if he runs on a separate list without full unity on the right.

Netanyahu is afraid that one of his right-wing allies might fall below the electoral threshold and fail to win seats in parliament, with tens of thousands of coveted votes going down the drain - as they did in April and September’s elections.

Netanyahu got the larger, reinforced far-right bloc he craved, but Otzma Yehudit is bound not to reach the electoral threshold in March and again waste votes the prime minister desperately needs.

Ben-Gvir, the follower of Kahane’s racist ideology, is not necessarily worse than others Bennett chose to warmly embrace.

He is just the only one who chose to decorate his Hebron living room with a picture of Baruch Goldstein, who in 1994 murdered 29 Muslim worshippers in the Ibrahimi Mosque.

That sort of display can tarnish the new “liberal” image Bennett is now trying to create for his far-right party.

In what was presented as an ultimate sacrifice minutes before the list submission deadline, Ben-Gvir offered to remove the photo from his wall. Too late.

Then he insinuated the Ashkenazi national-religious establishment rejected Sephardi, periphery-born members like himself.

One way or another the national-religious bloc is undergoing a major crisis. The lists are just a symptom of a much more severe sickness.

Yisrael Beiteinu’s leader Avigdor Lieberman, who used to say, “ to the right to me there is only a wall”, now promises to “keep Israel liberal”.

“Liberal”, according to Lieberman, means a government free of Arabs and Orthodox Jews. George Orwell would have a blast serving on the Central Elections Committee in charge of registrating the parties.

So far, the most symbolically important part of the registration process is not what is on the list but rather what is not.

Three letters disappeared this time from the Israeli political scene.

When voters enter the polling booth on 2 March, ballots bearing the three letters that have since 1992 represented Meretz, the only Jewish Zionist-leftist party, will be missing. Future or funeral? Israel's Labor party could be on the verge of extinction
Read More »

The Meretz-Labor union will be represented on the voting slips instead by the latter party’s traditional letters: Alef, Mem and Tav (or “Emet”).

It might be more than symbolic. The Israeli Zionist-left is close to extinction. Labor, the party that established the State of Israel, is not from that political strand.

Labor leader Amir Peretz was reluctant to go into this alliance. He was practically forced to, choosing to define it just as a “technical bloc”. In the process, the unhappy union created many anomalies.

Number two on the list is Orly Levy-Abekasis, who once held the same position on Lieberman’s list.

Meretz, the one Jewish party that took pride in Jewish-Arab partnership, ended up with their only Arab candidate, Essawi Frej, as number 11 on the list, a spot hardly electable.

Frej is the one who single handedly saved Meretz in the September 2019 elections. He recruited over 40,000 Arab voters, thus allowing the party to reach the electoral threshold. Now he is left behind that very threshold. Personal survival of Meretz leaders tops principle of partnership.

The only optimistic voice on the left comes from former Labor MP Professor Yossi Yonah, a political scientist.

“The unions might in fact be a positive phenomenon,” he tells Middle East Eye.

“They form some rainbow coalitions able to contain a variety of ideas and electorates who can share a common denominator. They came to be out of necessity, but might turn into something organically healthy.”

Others commentators have busied themselves by teasing the Election Committee, asking if is ready for the fourth round. They were not necessarily joking. 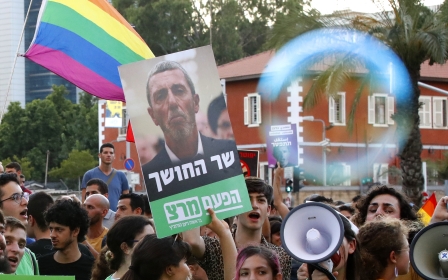