Hatice Cengiz, the fiancee of murdered Saudi journalist Jamal Khashoggi, has made a last-minute plea to stop the Premier League "caving in" on Saudi Arabia's takeover of Newcastle United Football Club.

Cengiz said she was horrified that the league appears willing to let Saudi Crown Prince Mohammed bin Salman "wash his reputation, and sully the name of sports".

Saudi Arabia has been accused of human rights abuses and the proposed buyout has been criticised by rights advocates, who accuse the kingdom of attempting to “sportswash” abuses. The takeover by a consortium led by Saudi Arabia's Public Investment Fund (PIF), which failed last year, appeared close on Thursday after the PIF proved the Saudi state would not have control of the club.

Instead, the kingdom's Public Investment Fund (PIF), which is set to provide 80 percent of the money for the £300m ($407m) deal, will be seen as separate to the state and therefore allow the takeover to pass the Premier League owners' and directors' test.

Saudi Arabia has been accused of committing war crimes during the ongoing civil war in Yemen, detaining and torturing women's rights activists, and has carried out hundreds of executions since King Salman bin Abdulaziz Al Saud took the throne in 2015.

The crown prince also stands accused by the United Nations and CIA of being directly involved in the brutal murder of Khashoggi, a Middle East Eye and Washington Post columnist, in October 2018.

Cengiz and her legal team are continuing to pursue a lawsuit against Mohammed bin Salman, with the CIA believing that the kingdom's de facto ruler approved the killing in the Saudi embassy in Istanbul.

"Only a few days after the third anniversary of Jamal’s murder, it is horrifying to learn that the crown prince is on the brink of getting what he wants: to wash his reputation, and sully the name of sports," Cengiz told the UK's Telegraph newspaper.

"I ask what has now suddenly changed? There is still no justice for Jamal’s murder. I urge the Premier League not to cave in now - this is the moment to show courage and principle. It will show the killers they cannot wash away their crimes. The [Premier] League needs to lead by example for football fans and all people to say no to murder."

"Given that the crown prince chairs and controls the fund that would finance the proposed deal, the claim that the Saudi state will not be involved and that therefore the necessary tests are satisfied, is groundless," he said.

"The Premier League must ensure that it cuts through the facade and rigorously examines the evidence of who is actually in control whether directly or indirectly.

Given that the crown prince chairs and controls the fund that would finance the proposed deal, the claim that the Saudi state will not be involved... is groundless

"Nothing less than full transparency is required. That is vital in order to uphold the high standards and human rights values of the League and the United Kingdom."

Amnesty International also expressed its anger on Thursday that the takeover appeared close to completion.

"There is now nothing legally stopping the takeover," a source heavily involved in derailing the deal last summer told the Telegraph.

"The legal issue will be resolved; so it simply becomes a moral question for the Premier League."

It is thought that a major hurdle to the deal was overcome after Saudi Arabia settled an alleged piracy dispute with Qatar's beIN Sports, which owns the rights to broadcast Premier League matches in the Middle East.

The Qatari channel currently holds the right to broadcast some of the world's biggest sporting events across the Middle East and North Africa. But beIN was banned in Saudi Arabia after the kingdom and several other countries severed relations with Qatar in 2017.

The broadcaster said on Wednesday that Saudi Arabia was planning to lift its ban. It has previously alleged that since August 2017 a vast and sophisticated Saudi bootlegging network known as "beoutQ" had been transmitting its stolen programmes via Riyadh-based satellite provider Arabsat.

In a statement, the sports media company said it had been approached by Riyadh to settle all outstanding legal cases, including a $1bn investment arbitration.

If Saudi Arabia agrees to lift the ban, beIN will be allowed to sell subscriptions for its sports content across the kingdom.

BeIn Sports said that its "singular objection" to the PIF's takeover of Newcastle United had been its ban.

Last September, Newcastle also confirmed that the Premier League had rejected the takeover bid and emphasised its disapproval of the process.

“This conclusion has been reached despite the club providing the Premier League with overwhelming evidence and legal opinions that PIF is independent and autonomous of the Saudi Arabian government,” a club statement read at the time. 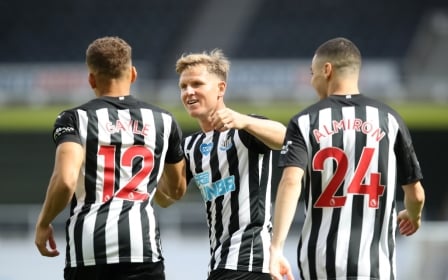