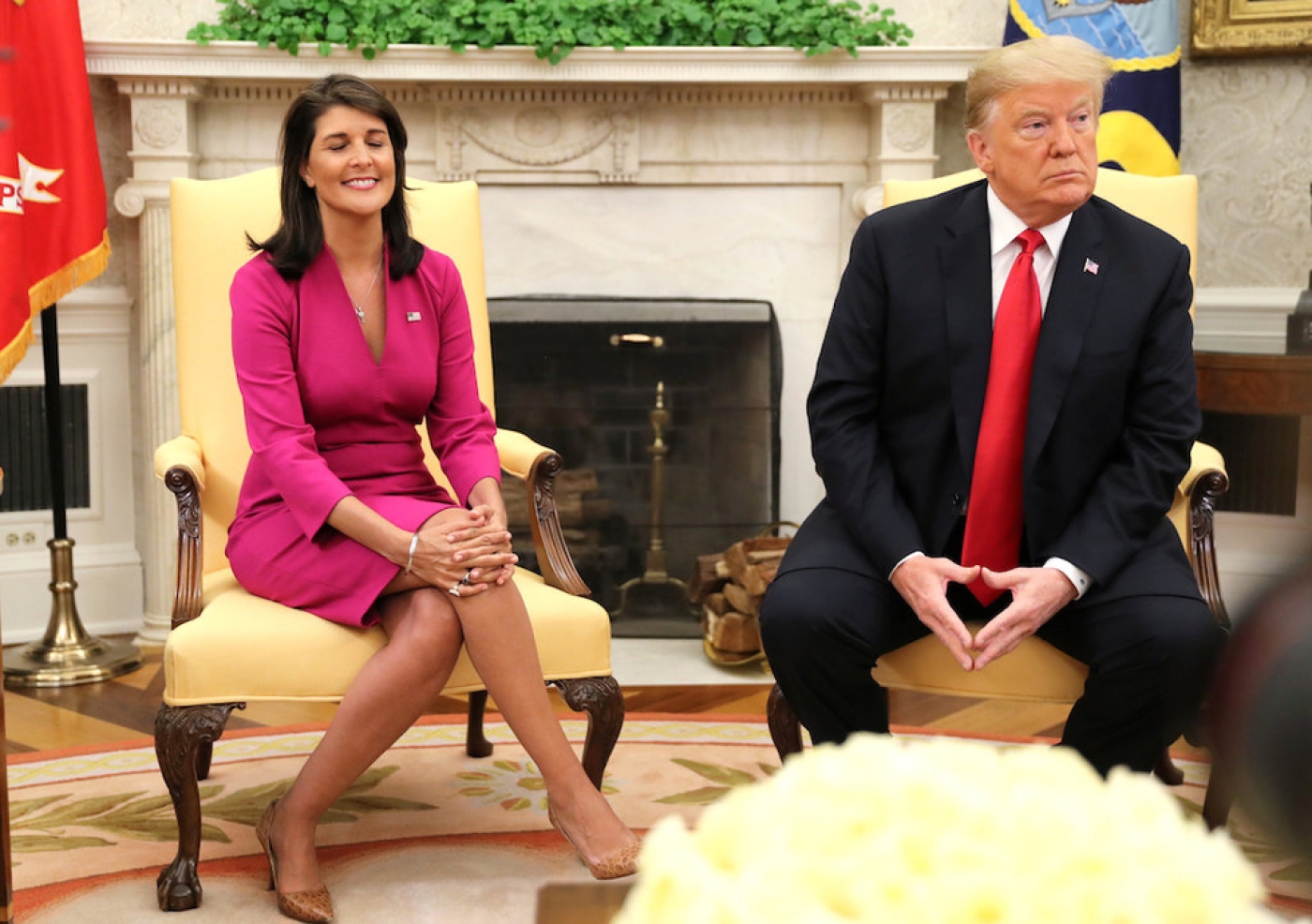 Trump meets with Haley in the Oval Office of the White House, 9 October (Reuters)
By
MEE staff

Nikki Haley announced on Tuesday that she will resign from her post as the US ambassador to the United Nations by the end of the year.

The ambassador cited the need for new blood in government as her reason for leaving.

"I think you have to be selfless enough to know when to step aside and let someone else do the job," she said.

Haley has been one of the most vocal defenders of Israel at the UN, repeatedly denouncing what she calls the international body's "anti-Israel bias".

She has also played a leading role in withdrawing Washington from the UN's cultural agency, UNESCO, and the UN Human Rights Council, both decisions aimed at shielding the Israeli government from international criticism.

Last year, Haley blocked the appointment of former Palestinian prime minister Salam Fayyad as the UN envoy to Libya solely because he is Palestinian.

"The United States does not currently recognise a Palestinian state or support the signal this appointment would send within the United Nations," she said in a statement at the time.

On Tuesday, as Haley spoke to reporters next to President Donald Trump at the White House, she ruled out running for president in 2020, pledging to campaign for Trump's re-election.

"Thank you Mr President; it's been an honour of a lifetime," she told Trump.

She also hailed the president's brand of unilateral foreign policy.

U.N. Ambassador Nikki Haley: "Now the United States is respected. Countries may not like what we do but they respect what we do." https://t.co/z5YZbandR6 pic.twitter.com/3LPpUU5s99

"Countries may not like what we do, but they know that if want to do something we will follow it through. Look at the chemical weapons in Syria," Haley said.

She also thanked the president's son in law and Middle East peace envoy, Jared Kushner, for his role in the ongoing negotiations to solve the Israeli-Palestinian conflict, calling his peace plan "so unbelievably well-done".

Trump meanwhile thanked Haley for "her service" and said he hoped she "comes back at some point".

Haley said she would remain in her post until the end of the year.

Trump said he would announce Haley's successor in the next two to three weeks, signalling that "many people" are interested in the job.

Reaction to her resignation

Shortly after the announcement, UN Secretary General Antonio Guterres expressed his "deep appreciation for the excellent cooperation and support" Haley exhibited in her role, according to Guterres' spokesperson.

"They had a very productive and strong working relationship," Stephane Dujarric told reporters.

Israeli Prime Minister Benjamin Netanyahu also thanked Haley for her support for Israel, saying in a statement that she had "led an uncompromising fight against the United Nations' hypocrisy and for truth and justice in our country".

Many others had a less favourable view of Haley's tenure at the UN, however.

Amnesty International said it hoped her resignation would "bring an end to the current low point in relations between NGOs and the US mission to the UN".

"Under her tenure," the group tweeted, organisations like Amnesty and Human Rights Watch "were singled out by her simply for having a different opinion, including on the importance of the Human Rights Council".

CODEPINK, a US-based anti-war group, also said Haley had "made the US less respected in the eyes of the global community, not more".

"War mongering & the abuse of human rights does not equal strength," the group tweeted.