For several weeks, Kabylia, a region traditionally hostile to the central government, has been voicing its opposition to the vote and vowing to disrupt it Demonstrators carry bricks to build a wall at the entrance of the daira (sub-prefecture) of Tizi-Ouzou, in the Kabylie heartland of the Amazigh community (AFP)
By
Naïma Ameur
in
Bouira, Algeria

In Bouira, a few hundred kilometres southeast of Algiers, Adel, a 30-year-old activist, is worried about the election day on Thursday.

"The closer the deadline draws, the greater the tensions are in Kabylia," he told Middle East Eye.

"I believe that on election day, people will shut down polling stations, burn the ballot boxes and kick out those who will be coming to vote."

During the campaign, which closed on Sunday, all five presidential contenders struggled to defend their party programmes across the country. But they were even more challenged in Kabylia, a region historically rebellious to state power.

The meetings there were disrupted by demonstrations, sometimes gathering thousands of protesters, as in the city of Bouiraon 27 November.

Ali Benflis, a former prime minister who over the years became an opposition figure and is one of the prominent presidential candidates, was forced to adjourn his meeting and move to a safer location after violent clashes between police and protesters.

The demonstrators threw stones, while police fired tear gas. More than 50 people were wounded, five of them severely.

On the eve of Ali Benflis' visit, many calls to cancel the meeting had circulated among the citizens. Protesters greeted the politician's convoy by shouting "murderous power" and by waving pictures of Massinissa Guermah, a young man fatally shot by the Beni Douala gendarmerie near Tizi-Ouzou, in April 2001.

That shooting led to violent riots in Kabylia and Algiers, with a death toll of 126 and more than 5,000 injured, according to the Algerian League for the Defence of Human Rights (LADDH).

In Bouira, home to both Arabic and Berber-speaking inhabitants, many believe that Benflis, prime minister between 2000 and 2003, bears significant responsibility for this tragedy.

"If it had been another candidate, there wouldn't have been such tension," observes a Bouira resident, who describes Benflis' visit as "provocation".

A couple of days prior to Benflis, Abdelkader Bengrina, candidate of the Islamist party El Bina, faced the same situation. Despite the heavy presence of security forces protecting his travel, he was booed in Lakhdaria, in the district of Bouira.

None of the five presidential candidates planned events in Tizi-Ouzou and Bejaia. Residents in the region have already managed to close polling stations and obstruct the revision of the voters' lists. Some even destroyed ballot boxes and walled up the local municipality headquarters.

Several local politicians indicated that the election will not be held in their municipalities, such as Slimane Khermous, mayor of the Tizi-Ouzou district town of Souk el-Tenine.

"We are not opposed to the election, but the prerequisites for free and fair polls have not been met. It must be cancelled and a serious dialogue process must be engaged," he said last Friday during a demonstration in the capital. "As mayor, I pay tribute to my citizens and the officials of the municipal people's assembly who refused the appointment of the electoral commission. In our municipality, no more talk of voting," he says.

Despite the authorities' efforts to promote this election and the threats made by army's chief of staff Ahmed Gaïd Salah, the public is holding out against the state. In the region, the election boycott is recurrent.

"Every time there is an election, whether legislative or municipal, people shut down the only polling station in the city. In 2017 [during the parliamentary elections], several people were arrested," an activist from Haizer, a commune in the northeast of the wilaya of Bouira, told MEE.

"This village is quite unique because there is a barracks nearby. The authorities bring the military to vote in Haizer and television stations report that in Kabylia, people vote. This is what makes locals angry," he added.

In this village, a series of rallies against the "12/12" presidential elections, as they are now called by Algerians, have already taken place. Shops have closed following calls for a strike in support of political prisoners.

"I have a friend who was arrested after a demonstration in Algiers. He had no interest in politics and was only driven by curiosity," says the activist.

"He brought a Berber flag with him and was arrested on Friday, 21 June, near the post office. He was detained for several months. When he got out of prison, he became ultra-politicised and is now actively involved in activism. They trained an anti-power activist in prison," he jokes.

In Kabylia, people have always campaigned against state power, an academic tells MEE. "Historically, the region has always been highly politicised, even during the Algerian war. The school and trade unionism played a major role," he notes.

Immigration has also been a key factor.

"The North African Star [an association founded in France in 1926] was created by emigrants from Kabylia. Then, the first workers were unionized in the Renault and Peugeot automotive plants in France. The region's intellectual class, writers in particular, also carried the seeds of revolution," he adds. "But we cannot say that the other Algerians are not revolutionary!”

He blames the state for trying to divide the country by stigmatizing Kabylia and focusing on cultural differences.

"We have never had a president with a 'national' status. We have had small presidents who belong to their small region so they stigmatize other regions, that's all," he says.

Many activists praise the "national awareness" and note that every time they move, wherever they go, candidates are met with anger from the locals.

In Tlemcen to the west, Blida, Setif, Annaba in the east or southern El Oued, the five candidates were constantly in confrontation with protesters who came to disrupt their meetings.

The authorities are trying to contain the protests by intensifying arrests and expeditious justice. 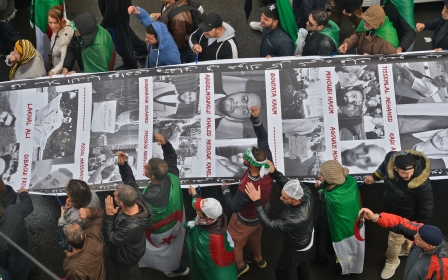