Weeping over images of slain relatives, Nadia Murad marked a key Yazidi festival in her home village where she was abducted by Islamic State 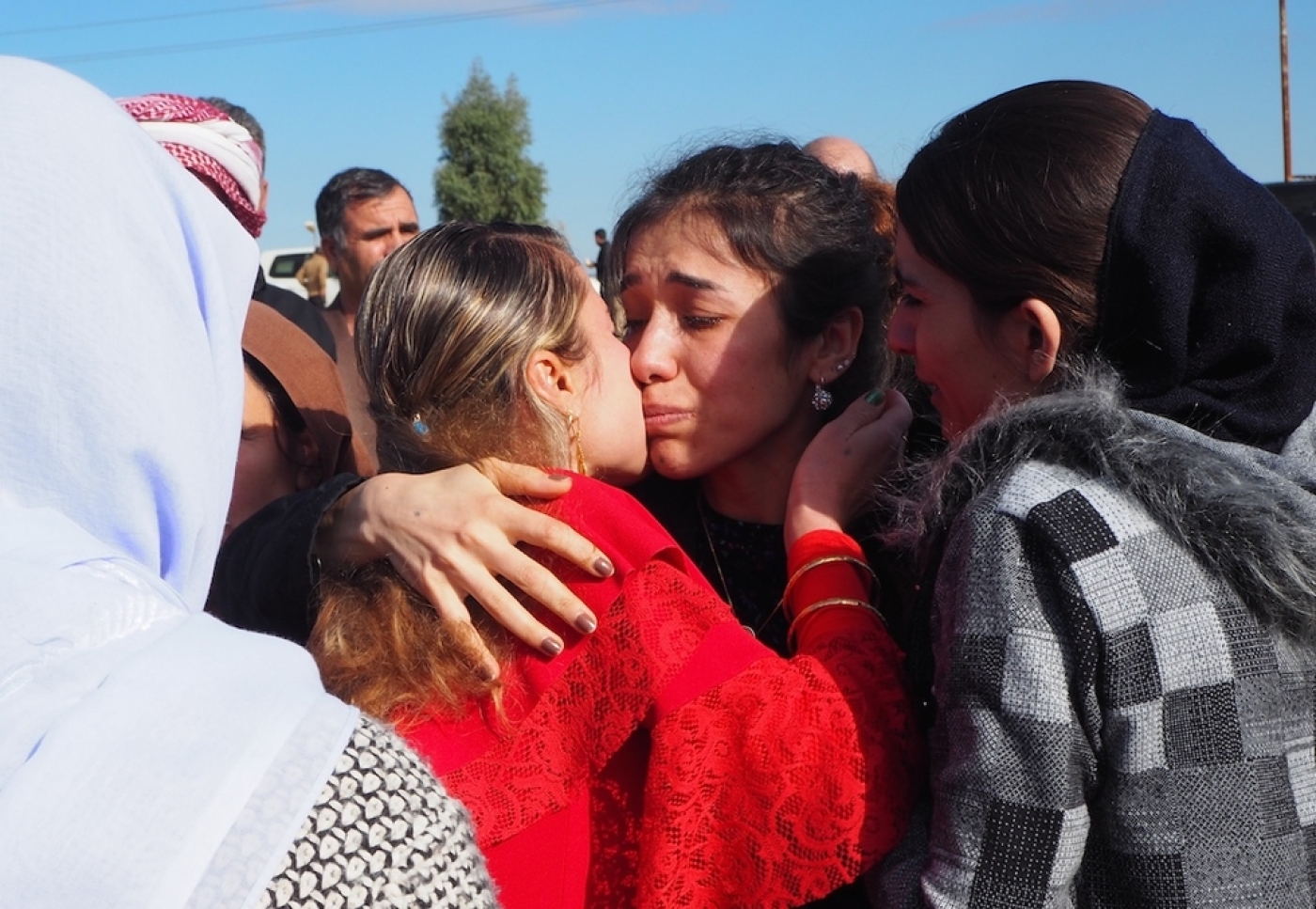 KOCHO, Iraq - A grief-stricken Nadia Murad broke down in tears when she saw the photograph of her mother, among hundreds of pictures of dead and missing former residents pasted across the walls of a school in her home village of Kocho in Northern Iraq.

When she reached photos of her brothers and a nephew killed by the Islamic State (IS) group, Murad pressed herself against the wall, trying to embrace the pictures as she wailed aloud for her lost relatives. The power of her emotion reduced many present to tears. Flanked by bodyguards holding back journalists, a film crew, and several hundred local people, hers was a very public grief.

In August 2014, this school in Kocho - the last Yazidi village in Sinjar taken by IS - became a scene of horror. It was where IS gathered villagers after a fortnight siege, during which time they failed to pressurise village elder Ahmed Jasso into agreeing the whole village would convert to Islam.

Militants confiscated personal property before segregating women and children from men older than 15. The former were taken to the upper level of the school from where, as detailed in Murad’s autobiography The Last Girl, they watched in horror as male relatives were loaded onto trucks in small groups and driven away.

When they heard shooting, they knew the men had been executed.

Older women, deemed worthless by IS, were also killed, including 78 who are buried in a mass grave in the village of Solagh on the outskirts of Sinjar. Younger women such as Murad, along with children, were abducted and enslaved, either forced to become sabyyia (sex slaves) or, in the case of young boys, trained as IS fighters.

This was the second time Murad had visited Kocho following her abduction by IS and her subsequent escape. The first was shortly after the area had been liberated by Iraqi forces in May 2017. Since then, the school has been turned into a makeshift museum where photos of the massacred and missing Yazidis of Kocho line the walls and images of those still missing are displayed on two rows of freestanding boards.

Murad visited Kocho and nearby Sinjar on Friday to mark the Yazidi feast day of Eda Rojiet Ezi which, following a three-day fast, focuses on honouring and caring for deceased relatives to ensure their well-being in the afterlife and their future rebirth.

Traditional customs were carried out at cemeteries across Sinjar, where Yazidi families have steadily started returning to what is left of their former homes and lives. In one cemetery in the foothills of the Sinjar mountain range, weeping women laid food offerings and even freshly-lit cigarettes on the graves of their relatives, before carrying further offerings up to a small temple on the summit of the cemetery.

Even this small cemetery contains 20 graves from the IS Yazidi genocide of 2014, from where some of the loudest wailing could be heard. In front of a marble grave, an older woman sat on the ground, clutching a photograph of her dead husband, stroking his face and weeping inconsolably. He and his brother had crept down from Sinjar Mountain, where thousands of Yazidis fled from IS, to get food for their starving families but IS had rigged their home with IEDs and both were killed.

Many more Yazidis were unable to honour their dead with the usual customs and rites, including in Kocho. Yazidi victims of IS lie in mass graves across the Sinjar region and locals are still waiting for either the Iraqi government or international organisations to help exhume the bodies and carry out DNA testing to identify the remains.

“It is incredibly important for us that these bodies are exhumed, identified and buried individually so family members can know who is buried where,” explained former Kocho resident Hassan Suliman.

“Many of us have no idea where our relatives are buried so today we are visiting a great many cemeteries and mass graves. It’s a terrible situation for people not to know where their loved ones are buried.”

Iraq, which had up to one million missing nationals even before the rise of IS according to the International Commission on Missing Persons, is struggling with a backlog of remains awaiting DNA testing and identification.

The UN said in November that over 200 mass graves had been found in Iraqi territory formerly controlled by IS. Many have not yet been exhumed.

Kocho’s men were mostly buried in 14 mass graves on the outskirts of the village which IS left extensively mined with IEDs. The closest Murad could get to one of the graves was to stand in the far corner of the grounds of Kocho school.

Accompanied by her new husband Abid Shamdeen, Murad also visited her humble former home with half-brother Khaled - a survivor of IS executions in Kocho - her former college and the mass grave in Solagh where the remains of her mother are thought to be interred.

“With the money I got from the Nobel Peace Prize, I will build a hospital in Sinjar to treat sick people, mainly widows and women who were exposed to sexual abuse by Islamic State militants,” she told hundreds of locals who had gathered in Sinjar to greet her.

Murad has become a celebrity locally as well as internationally for her work highlighting the plight of the Yazidis, a minority who follow an ancient faith and who IS cruelly targeted. Sinjar was left destroyed, both by IS and from fighting. Basic services have not yet been fully restored to the area and healthcare services remain extremely limited.

During her visit to Iraq, Murad met Iraqi politicians in Baghdad and Erbil, including Prime Minister Adel Abdul Mahdi and President Barham Salih. She urged them to reopen a key road connecting Sinjar to Duhok in Iraqi Kurdistan, where many displaced Yazidis continue to live in camps.

The road was closed by Kurdish Peshmerga forces in October last year when Baghdad took back control over the disputed territories of northern Iraq, including Sinjar, following an unsuccessful attempt by the Kurdish Regional Government (KRG) to create an independent state.

All travel, including for emergency medical cases between Sinjar and Iraq Kurdistan, has since necessitated a several-hours-long diversion through Mosul. Sinjar-based pharmacist Mourad Khro Mourad told MEE this diversion was particularly distressing for young Yazidi women, many of whom were formerly enslaved, raped and tortured in the city by IS.

Murad's high-security cavalcade of armoured vehicles were the first to use the road in over a year. Although the Sinjar area is fully liberated from IS, the armoured cars and extensive security were deemed necessary.

Even before she and Denis Mukwege were jointly awarded the Nobel Peace Prize on Monday last week for their efforts to end the use of sexual violence as a weapon of war, Murad had apparently received threats for speaking out about IS atrocities, particularly towards women.