Egyptian singer and actor Mohamed Ramadan has sparked a social media backlash after his image with two Israeli celebrities in Dubai went viral.

In the image, shared by an Arabic-language account affiliated with Israel's foreign ministry, Ramadan is seen posing with Israeli singer Omer Adam and Emirati influencer Hamad al-Mazrouie during a trip to Dubai.

"Art always brings us together," wrote the official Israeli Twitter account on 21 November, followed by the flags of Egypt, Israel and the United Arab Emirates.

The images sparked a social media campaign against the Egyptian star, with trending hashtags accusing him of being a "Zionist" and betraying the Palestinian cause by encouraging normalisation with Israel.

The singer defended himself on his Facebook and Instagram accounts, saying: "I cannot ask each one his identity, his nationality," accusing some of trying "for the thousandth time to stop [his] success" without really caring about "the Palestinian cause".

The 32-year-old artist owes his fame in the Arab world to music, particularly his collaboration with the Moroccan Saad Lamjarred, as well as his leading roles on Egyptian television drama and cinema. Last month, the official Israeli Twitter account caused another controversy when it reported that Adam received a personal invitation from the royal family of the UAE and visited a synagogue in Dubai during celebrations of the Jewish holiday of Simchat Torah.

In a video clip posted by the Twitter account at the time, the Israeli singer performed religious rituals in Hebrew at the Jewish temple in Dubai.

The UAE, Bahrain and Sudan have normalised their relations with Israel since the summer, breaking a longstanding consensus among Arab states that normalisation with Israel must be contingent on a resolution of the Israeli occupation and the establishment of an independent Palestinian state.

Egypt was the first Arab country to normalise ties, in 1979. 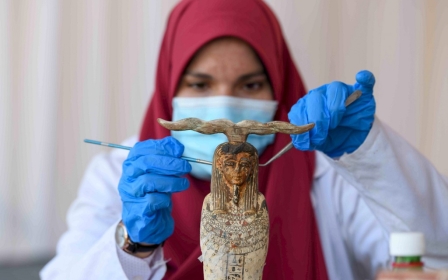