Men play the role of jailed Palestinians and Israeli soldiers during a rally in support of Palestinian prisoners on hunger strike in Israeli jails, in Gaza City, 17 April 2017 (Reuters)
By
MEE and agencies

Hundreds of Palestinians in Israeli jails launched a hunger strike Monday following a call from leader and prominent prisoner Marwan Barghouti, a movement that could mark a serious challenge to Israeli authorities if sustained.

The hunger strike was called for in connection with Palestinian Prisoners Day, observed annually, but also ahead of commemorations this summer marking 50 years since the 1967 Six Day War and the start of Israel's occupation.

Hunger strikes by Palestinian prisoners occur regularly, but rarely on such a large scale. Barghouti's call for the strike has given it added credibility, with the 57-year-old serving a life sentence over his role in the violent second Palestinian intifada.

He is a popular figure among Palestinians, with polls suggesting he could win the Palestinian presidency.

Graffiti showing the iconic image of his cuffed hands raised above his head flashing a peace sign can be seen in the West Bank.

"Decades of experience have proved that Israel's inhumane system of colonial and military occupation aims to break the spirit of prisoners and the nation to which they belong, by inflicting suffering on their bodies, separating them from their families and communities, using humiliating measures to compel subjugation," Barghouti wrote in a New York Times op-ed.

"In spite of such treatment, we will not surrender to it." Issa Qaraqe, head of prisoners affairs for the Palestinian Authority, said that "around 1,300 Palestinian prisoners" were participating in the hunger strike and the number could rise.

The Palestinian Prisoners Club NGO put the number at 1,500. Israeli prison service spokesman Assaf Librati said that 700 prisoners had announced on Sunday their intention to begin a hunger strike.

"We are checking this morning to see the number of prisoners actually striking as some of them said they would only observe a symbolic protest strike and then resume eating afterwards," he said. "There will be an update later." Some 6,500 Palestinians are currently detained by Israel for a range of offences and alleged crimes.

Israel says it must be vigilant to prevent fresh eruptions of violence, particularly following a wave of knife, gun and car-ramming attacks that erupted in October 2015.

The violence has greatly subsided in recent months. While many Palestinians view Barghouti as a hero, Israelis point to the bloody suicide attacks of the second intifada and his role in the uprising.

For Palestinians, the prisons have become a stark symbol of Israel's occupation.

Those on hunger strike have issued a list of demands, including access to phones, extended visiting rights and better medical service.

Israeli public radio reported that public security minister Gilad Erdan has ordered intervention units to be put on standby and that a field hospital be set up outside one prison to avoid having to take sick prisoners to civilian hospitals.

It quoted Erdan as saying that the demands regarding prisoners' conditions were unreasonable.

Some Israeli analysts have sought to highlight the rivalry between Barghouti and Palestinian president Mahmoud Abbas within their Fatah party, suggesting his call for a hunger strike was also related to internal politics.

However, Fadwa Barghouti, wife of Marwan Barghouti said the strike had been in preparation since August before the Fatah convention and before Fatah deputy Presidential elections.

“All factions agreed since that time to send their demands to the authorities, and if these demands were not met, then they will go for hunger strike on the prisoners day, today” she told Middle East Eye.

“The prisoners resorted to this massive open-ended hunger strike after losing hope of any other solution, they started by having dialogue with the prisons authority, followed by warning messages to this authority, without any response” she said.

Some 500 are held under administrative detention, which allows for imprisonment without charges or trial. Thirteen Palestinian lawmakers are also among the detainees. 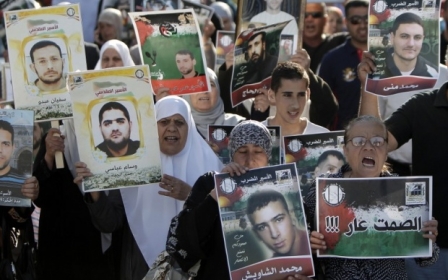 Occupation
Yet another Palestinian family fragmented by the Israeli occupation