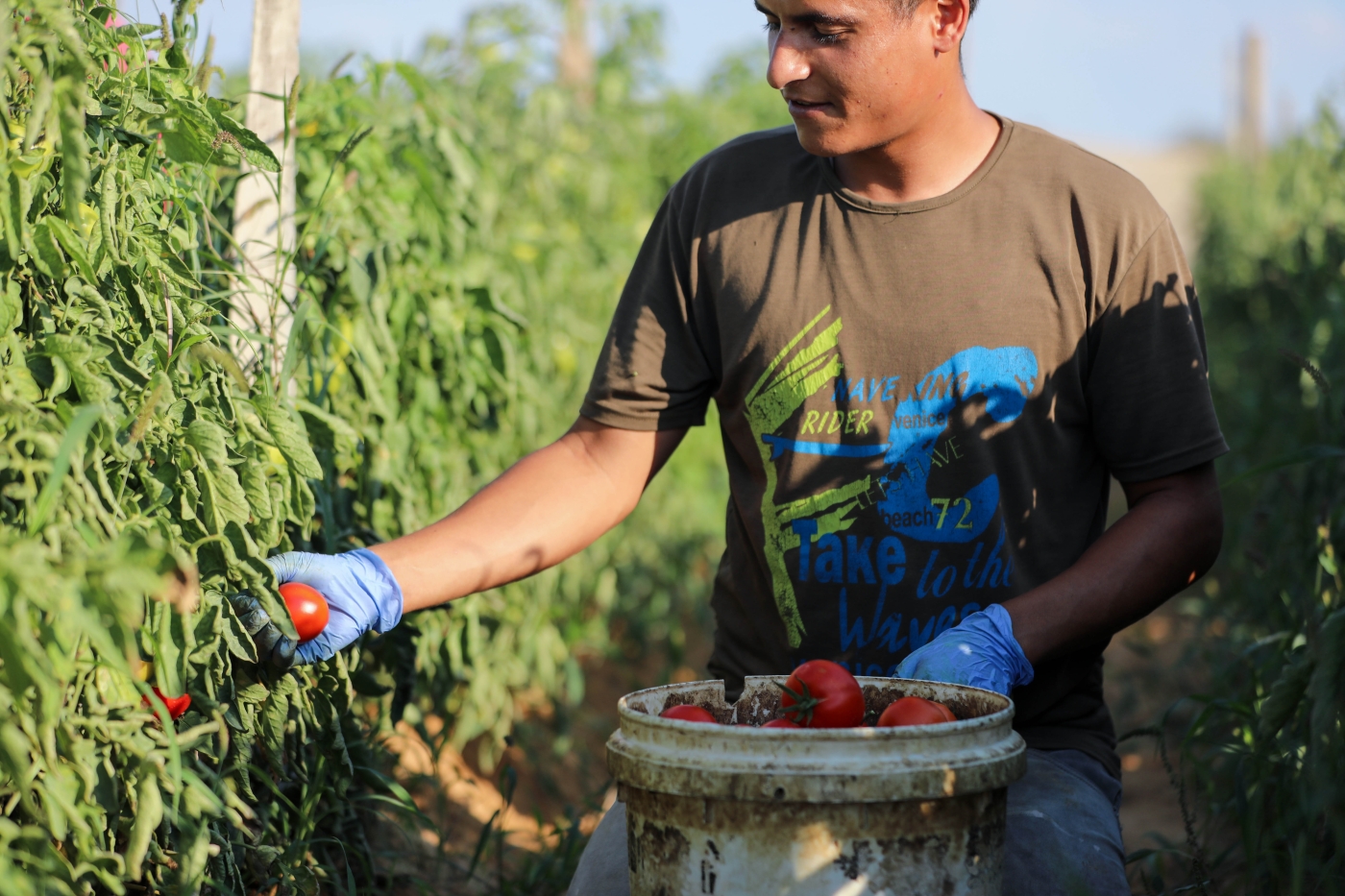 Wandering in his three-hectare farm in the besieged Gaza Strip, Nahed Abu Madi looks at some 50 workers harvesting tomatoes, and the Israeli soldiers deployed nearby.

He is full of anger and despair at Israeli authorities for imposing restrictions on the sale of tomatoes by farmers like him.

“I just want anyone to convince me what danger the crown (pedicles) of tomatoes imported to the West Bank pose to Israel?” he tells Middle East Eye, from his farm in the eastern borders of Rafah, south of Gaza.

“Isn't the West Bank my country? Why do they (Israel) put such silly and harmful restrictions on poor farmers? Why do they not leave us alone and mind their business?”

'I just want anyone to convince me what danger the crowns of tomatoes imported to the West Bank pose on Israel?'

Since May, Israeli authorities have required Gaza farmers to remove the crown of the tomato - namely the sepal and pedicel of each tomato that grows from the flower - and keep the fruit attached to the stem, before allowing trucks carrying the fruit to pass through the Karam Abu Salem crossing for export to the occupied West Bank.

The decision was applied for 50 days, which caused heavy financial losses estimated at $17.8m to farmers in the strip. Then, it was reimposed in August, effective until today.

Abu Madi points out that because of Israeli restrictions, vegetables take three days to reach consumers in the West Bank from Gaza, although normally it should take just a few hours. “If we cut the crowns, the tomatoes rot quickly since they become more vulnerable to weather conditions,” he says.

“All farmers arrange the vegetable and tomato boxes on top of each other when harvesting. If there are no crowns, tomatoes will be exfoliated. Thus, consumers will not buy them. As a result, traders also will not buy them.”

“My debts and losses have reached 150 thousand shekels ($46,327) just during this season. Who will compensate me for that? Of course, no one. I had already lost more than 300 thousand shekels ($92,647) because of the Israeli war on Gaza, and no one has given me back a penny.”

Israel launched a devastating 11-day assault in May 2021 against Gaza and killed 253 Palestinians, including 66 children, 39 women and 17 elderly people, while almost 2,000 were injured.

The onslaught has caused $204.7m losses in the agriculture sector.

“When exporting tomatoes and other vegetables is allowed, I work sixteen hours daily and earn forty shekels ($12.35) each day, but if it’s not, I just work for three hours per day and earn ten shekels ($3.03),” Abu Mohammed, a 41-year-old worker, tells MEE while harvesting tomatoes.

“When I earn ten shekels, I just can buy some bread, beans and lentils for my ten children, and can not give them pocket money for school. We manage to eat well only if exporting tomatoes is allowed,” he adds.

Like most Gaza-based farmers, Madi Madi is on the same page with Nahed Abu Madi.

“I have been a farmer for thirty years and never heard of such a weird decision. We have always exported crops to the West Bank. Why do they interfere now?” he tells MEE while giving instructions to some of his 120 workers who are planting potatoes in his 12-hectare farm east of Rafah.

“As a farmer, I do not plant for Gaza but for exporting to the West Bank, and sometimes to Israel, because Gazan traders buy one kilogram of tomatoes for less than one shekel (US 30 cents), while those in the West Bank pay two to five shekels (US 60 cents to $1.50).”

'I have been praying to God that Israel allows us to export tomatoes with crowns. Whenever we export our crops, we earn a good deal of money'

“I have lost around 100 thousand dollars since June. As you can see, the tomatoes are rotting in that thirty-dunam farm because I could not afford fertilisers which would cost me more than 120 thousand shekels ($37,000),” he says.

However, Madi hopes that Israel rescinds its decision before some of his tomato crops become ripe.

“I have been praying to God that Israel allows us to export tomatoes with crowns. Whenever we export our crops, we earn a good deal of money.”

Madi is confident that he could pay off half of his debts if he exported all crops of his 12-hectare farm.

No demand for crown-less tomatoes

Gazan vegetable-trader Bassem Abu Ghali, who buys the crops of Nahed Abu Madi and Madi Madi to export them to the West Bank and Israel, tells MEE that traders in the West Bank refuse to buy tomatoes without crowns, and crops without tomatoes.

He explains that almost daily prior to the decision, he used to export 60 to 100 tonnes of many kinds of crops such as cucumbers, eggplants, peppers, bell peppers and, above all, tomatoes, which constituted around 70 percent of the crops.

Nowadays, he exports a few tonnes of vegetables without tomatoes. He explains that he exported only four tonnes of eggplants, bell peppers and peppers the day before the interview.

Abu Ghali has tried hard to convince his West Bank counterpart to import his crops without tomatoes, but he has failed. “Tomatoes are the key for exporting,” he said.

"I incur heavy losses each day that passes without exporting. I’ve lost more than 650 thousand dollars over the past two months. Tens of farmers owe me hundreds of thousands of shekels, but I cannot get even one dollar from them as all of them went broke because of the decision.

'Though the Gazan tomatoes are the best in the Middle East, we have had to import tomatoes and vegetables from Turkey'

“Why does Israel export to Gaza daily hundreds of tons of fruits and no one can say no to them? Why are Palestinian people in the West Bank deprived of Gazan tomatoes? As always, no one cares about us.

“Israel exports its vegetables to the EU and USA and others. Does any country dare to ask Israel to do what it has asked us?”

“As a trader, I will not import anything from Gaza until the occupation revokes the decision. I also told many traders in Nablus to do the same. As Palestinians, we must not accept such a thing.”

“Though the Gazan tomatoes are the best in the Middle East, we have had to import tomatoes and vegetables from Turkey. Unfortunately, we pay a lot of taxes. Each time I import from Turkey, my heart aches. We want our country's crops,” he says.

Al-Mohammed has also incurred losses of $33,000 due to the decision.

The spokesperson of the Ministry of Agriculture in Gaza, Adham al-Bassiouni, told MEE that Israel's decisions on whether to ban or allow the export of crops are unpredictable.

“Exporting Gaza’s products is subject to the occupation’s mood. They allow and ban whenever they like,” he said. 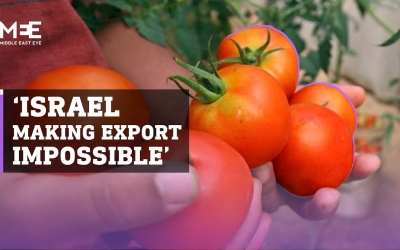 Regarding the requirement to remove crowns, he said his ministry opposes the decision because residents of Gaza "have a right to market their products in PA-controlled governorates".

“The Israeli claim that tomato crowns contain diseases and bacteria is baseless and unscientific, as the all historical Palestinian lands (Israel and PA-controlled territories) have common features,” he said, explaining that if Gazan tomatoes have diseases, the Israeli and the West Bank tomatoes will have the same diseases.

Bassiouni said that all exported crops are subject to rigorous regulations including check-ups in the laboratories of the ministry.

Nahed Abu Madi’s phone rings. “This is the owner of a fertilisers store to whom I owe more than 60 thousand shekels ($18,500),” he tells MEE. “He wants his money and I do not dare to reply. I am afraid that he will sue me and I will go to prison.

“Gazan farmers are being treated like hustlers because of the occupation. We have been evading those to whom we are indebted. But this is a situation we’ve been forced into. I swear by God we are not hustlers.”

Gaza Siege
Gaza siege: All I want to do is travel to Palestine
Issam A. Adwan
Gaza Under Attack
Why Gaza needs a new paradigm
Haidar Eid
Occupation
Israel's medical permit denial for Gaza's children doubles in past year, warns report 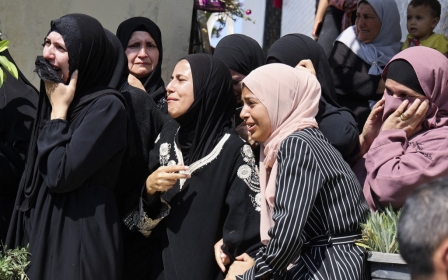 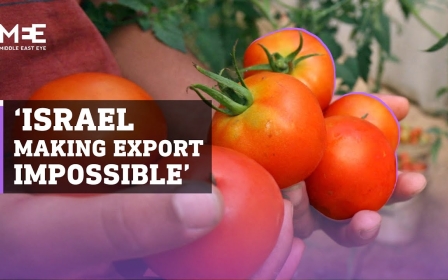 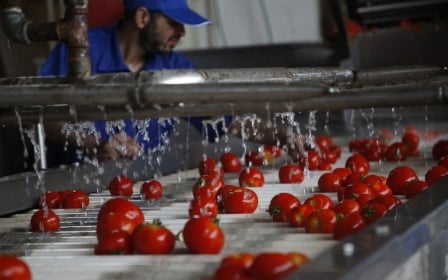