After joining International Criminal Court in January, Palestine to launch case over Israeli war crimes in Gaza and settlement-building activities Palestinian children play near the rubble of their home, destroyed during last summer's Gaza conflict (AFP)
By
MEE and agencies

Palestinian officials are to lodge their first complaint against Israel for alleged war crimes at the International Criminal Court on 1 April, a senior official told AFP on Monday.

"One of the first important steps will be filing a complaint against Israel at the ICC on 1 April over the (2014) Gaza war and settlement activity," said Mohammed Shtayyeh, a member of the executive committee of the Palestine Liberation Organisation (PLO).

On 2 January, the Palestinians moved to formally join the Hague-based court in a process which is due to take effect on 1 April, setting the scene for potential legal action against Israeli officials for alleged war crimes.

Israel reacted furiously, and quickly moved to cut off millions of dollars in monthly tax payments it collects on behalf of the Ramallah-based Palestinian Authority, exacerbating an already severe financial crisis.

There was no immediate response from Israel, with foreign ministry spokesman Emmanuel Nachshon refusing to react to a declaration which he described as "speculative and hypothetical".

On 16 January, the ICC announced "a preliminary examination" into Israel's actions over a period beginning in June which included last year's war in Gaza, in which about 2,200 Palestinians were killed.

UN figures indicate that the majority of the victims were civilians.

The Palestinians are also planning to sue Israel over its policy of settlement building on land they want for a future state.

Under international law, all Israeli construction on land seized during the 1967 Six-Day War is viewed as illegal and a major stumbling block to efforts to end the decades-long conflict. Occupation
First ICC case against Israel to be over Gaza 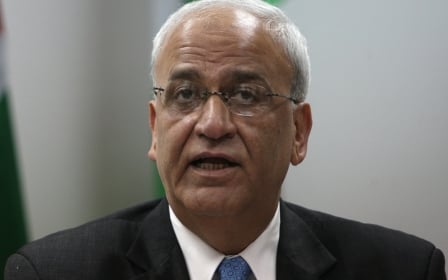