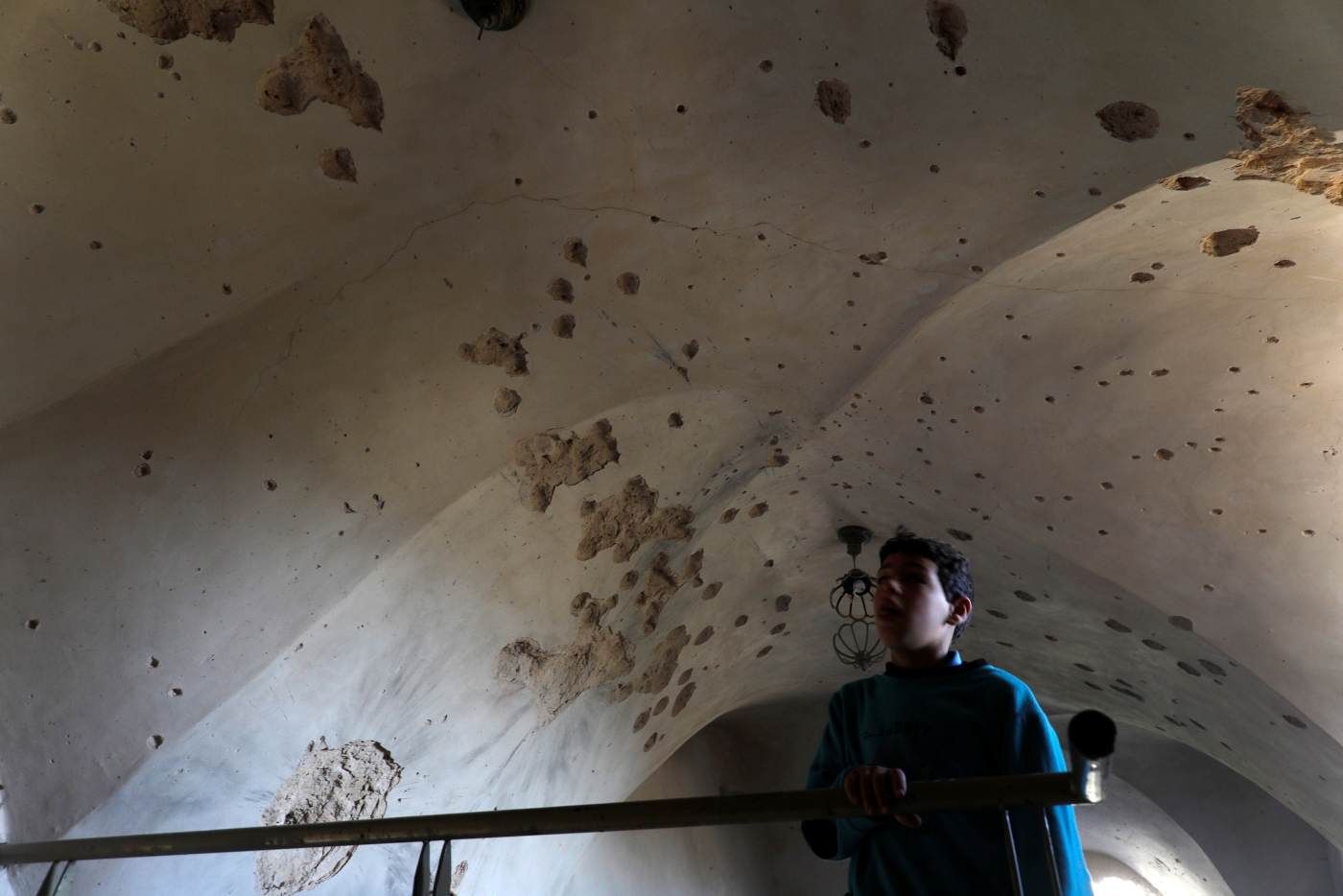 A boy looks inside a damaged house where a Palestinian gunman was killed by Israeli forces in the village of Abwein in the Israeli-occupied West Bank (Reuters)
By
Akram Al-Waara
in
Bethlehem, occupied West Bank

Residents of the Palestinian village of Abwein were startled on Tuesday evening when Israeli forces, dogs, drones, bulldozers and camera crews descended on its historic centre and a dramatic face-off began.

The soldiers and police surrounded a house sheltering Omar Abu Leila, a 19-year-old Palestinian suspected of killing an Israeli soldier and a settler two days earlier near the illegal settlement of Ariel in the occupied West Bank.

“Around 7 pm, Israeli special security entered into the old town of Abwein and surrounded an old house where Omar Abu Leila was hiding,” Muwafaq al-Huweil, head of the Fatah party in the Ramallah district, told Middle East Eye.

'It was as if they were going to war with another army, not coming to arrest one 19-year-old boy'

Huweil, 50, told MEE that residents were startled by the sheer amount of force deployed in the area.

“It was as if they were going to war with another army, not coming to arrest one 19-year-old boy,” he said.

Israeli media and security officials released statements on Tuesday saying that the forces surrounding the building called on Abu Leila to evacuate.

"The assailant opened fire at our forces and was killed during the exchange of fire," a Shin Bet statement said.

But Huweil disputed the Israeli narrative of events, saying that Abu Leila was not the first to fire.

“Yes they called out on the loudspeakers for him to leave, but tens of eyewitnesses say that the soldiers then immediately started opening fire, sparking a shootout,” Huweil said.

He added that clashes erupted between local youth and Israeli forces, who used live fire, tear gas and rubber bullets against the Palestinians.

“The youth in the village had no connection to Abu Leila, but when they heard he was hiding there, they went to go support his struggle,” Huweil said.

According to Huweil, more than 10 youths were hospitalised after being shot with live ammunition, while several others were wounded by tear gas and rubber bullets.

“The soldiers were out to kill Abu Leila, and kill anyone else who stood in their way.”

Abu Leila was not the only Palestinian killed by Israeli forces on Tuesday.

Two other young men, Raid Hamdan, 21, and Zaid Nouri, 20, died after being shot by Israeli forces at a contested religious site near the West Bank city of Nablus.

An Israeli army statement said the two were shot after explosives were hurled at a group of Jewish worshippers visiting the site they believe to be the tomb of the prophet Joseph.

Palestinians in Abwein and Nablus later declared a day of strikes on Wednesday over the deaths.

“They killed one person, Abu Leila, but they cannot kill the Palestinian resistance. This is the message that people received yesterday.”

Abu Leila’s home village of al-Zawiya ground to a halt on Wednesday as locals mourned the death of one of their own and anxiously awaited for any news on the status of Abu Leila’s body, which was seized by Israeli forces following the shootout.

“The last news we received from the Palestinian liaison's office was the confirmation that it was Omar Abu Leila who was killed,” al-Zawiya mayor Naeem Abu Shqeira, 40, told MEE.

“Our village is a small, quiet village on the edge of Salfit, close to the Green Line” demarcating the West Bank and Israel, Abu Shqeira said. “This news for us was shocking. No one could believe that this happened in our village.”

'When a people are under occupation and subjected to daily violence, it drives the youth to do these kinds of things'

“Any attack that happens, like the one Omar did, we put the responsibility on the occupation,” he told MEE. “When a people are under occupation and subjected to daily violence, it drives the youth to do these kinds of things.”

“Our children grow up seeing oppression and violence, and how the Israelis attack us and steal our land,” he added, saying it was “a natural reaction” for young people like Abu Leila to “fight for their rights and for their people”.

“The reason why people attack Israelis is not because they are terrorists, it’s because of the occupation.”

In the wake of the Ariel attack, Israeli Prime Minister Benjamin Netanyahu visited the site of the assault and the home of the Israeli settler who was killed, a rabbi living in the Eli settlement.

During his visit, Netanyahu promised the swift punitive demolition of Abu Leila’s family home and vowed to push for a change in Israeli policy that would seek the death penalty for any Palestinian who commits an attack against an Israeli.

In the predawn hours of Sunday, hours after Netanyahu visited the attack site, Israeli forces arrived at Abu Leila’s family home and began measuring it and taking photos in preparation for demolition, his uncle Khaled Abu Leila told MEE.

“It’s not just one family living in the house, there are four families,” Abu Leila, 55, told MEE, adding that two elderly widows were also living in the building.

“More than 16 people will be made homeless if they go through with this demolition. And we know they will, they always do,” he said.

Such a visit by Netanyahu would generally be considered unusual. But given that Israeli elections are only two weeks away, Abu Shqeira and Huweil told MEE that the premier’s visits were nothing more than “campaign advertisements”.

“What Netanyahu is doing now is strengthening his election campaign,” Abu Shqeira said. “In these cases they could easily arrest people, but they choose to kill them.”

“It’s all part of their strategy,” he added. “Netanyahu says he will push for the death penalty, but any time a Palestinian is accused of something he is executed in the streets. How is that any different?”

Huweil echoed Abu Shqeira’s sentiments, saying: “The violence that occurred last night in Abwein and Nablus is not just because Omar Abu Leila carried out an attack.

“Last night they killed two other Palestinians in Nablus for no reason. These are all electoral publicity for Netanyahu to appeal to his right-wing base and the settlers who he needs to vote for him.

“For the Israeli public, especially the right wing, whoever kills the most Palestinians is the one that has the most political clout, and the best chance of getting elected.”