A Palestinian man from the occupied West Bank was released from jail on Tuesday after an Israeli woman who accused him of raping and beating her recanted her testimony, saying a group that opposes relations between Israelis and Palestinians coerced her into making the claims.

In an interview with Israeli Channel 10 TV, the Israeli woman, identified only as “S”, said that a representative of the right-wing Jewish organisation Hidabroot - which owns a number of commercial concerns, including a television network - threatened her with the loss of child visitation rights if she did not make the false accusations against her then-boyfriend, Sadeq Ghayeb.

S, who had been separated from her Jewish husband for a year at the time, recalled the threats levelled against her and her two children: “‘Listen… if [Ghayeb] will no longer be in the picture, then the kids will return to [live with] you. But if he remains in the background, I promise you that I will do everything to ensure that they not return to you,” she said she had been told.

The case against Ghayeb collapsed when S broke down on the witness stand in a Beersheba courtroom and confessed that she was pressured to lie, according to Tuesday's report.

I didn’t think that these kinds of things happen in this country. You don’t throw people in jail for nothing, people who did nothing

Without S’s testimony to corroborate the charges, the state wiped the defendant’s record and released him from jail on Tuesday where he had awaited trial for eight months.

“I didn’t think that these kinds of things happen in this country. You don’t throw people in jail for nothing, people who did nothing,” Ghayeb told Channel 10 after his release.

Ghayeb said that while incarcerated, he feared that he would be forced to remain there for years. “I thought there was no way I would get out of it.”

While romantic relationships between Jews and non-Jews are not forbidden by law, the state does not permit individuals registered as members of different religious groups to marry in Israel, and the government funds religious groups - known as anti-miscegenation organisations - that campaign to break up mixed families.

The anti-miscegenation group Hidabroot describes itself as the “world’s largest Jewish TV Network,” with satellite broadcasts in six languages, saying it aims “to present the attractive face of Judaism”.

In March, three Israelis were indicted over allegations that they illegally passed Hidabroot personal information of patients scheduled to have abortions, which they allegedly used to contact the women and dissuade them from going through with the procedure.

Hidabroot also has a “department for captives in Arab villages” and runs telephone hotlines in Israel and the US for “reporting and assisting cases of intermarriage,” per the group’s website, where the group's chief rabbi Zamir Cohen calls miscegenation “a type of quiet holocaust for the Jewish people," according to its website.

Included among the lectures hosted by Hidabroot is a controversial speech given in March 2016 by Israel Chief Rabbi Yitzhak Yosef, in which he ruled that “according to Jewish law, it is forbidden for a non-Jew to live in the Land of Israel”.

The story of Ghayeb and S is not unique, however.

On the exact same day as Yosef’s speech, Prime Minister Benjamin Netanyahu slammed opposition parties for not condemning a reported incident of Palestinians raping and urinating on a young Israeli woman, and threatening to kill her family members if she told anyone.

Days later, the woman confessed that her family "fabricated the rape allegations to put an end” to her romantic relationship with one of the Palestinians, a teenager.

S now confirms Ghayeb’s claim that their relations were consensual, and describes how they first met online, after she uploaded a photograph of herself dressed up for the Jewish holiday of Purim.

“He is a [Palestinian] police officer in the [West Bank] – he was. It was Purim, and I posted a picture [of myself] as a sexy police officer. He commented: ‘Damn, girl!’” according to the Channel 10 report.

The Israeli state restricts entry to Palestinians who do not have Israeli citizenship. But Ghayeb possessed a work permit to enter Israeli territory, so the two made a date to meet inside Israel, at the seaside city of Ashdod, which until 1948 was the Palestinian town of Isdud.

“We met on the beach in Ashdod. We became addicted to the sea,” S recalled.

Hidabroot’s efforts to badger her into making a false rape report began when people in her inner circle contacted the group, S told Channel 10.

Responding to the Channel 10 report, Hidabroot has denied that it had pressured S to falsify charges against Ghayeb, calling the report “one-sided and distorted”.

”It was the young woman who made contact with the [female] representative of the group and told [the representative] that particular member of a minority group beats and rapes her, and that she fears for her life. The representative did what any normative citizen would have done and suggested to her that she file a police complaint,” read the Hidabroot statement. 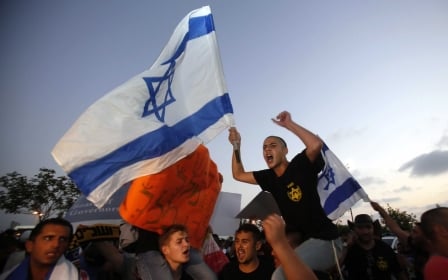