Protesters call for the release of Bilal Kayed (AFP)
By
AFP

A Palestinian imprisoned in Israel without trial has ended a 71-day hunger strike, his family told AFP on Wednesday.

Suha Kayed said her brother Bilal, 35, had called off his protest after Israeli authorities said his current six-month term of internment would not be extended.

"He has ended his strike after an agreement to end his detention," she told AFP from her home in the northern West Bank city of Nablus.

"He suspended his hunger strike after we consulted with him and he gave his approval," he told AFP.

Kayed was meant to be freed from prison in June after serving a 14-and-a-half-year sentence for activities in the Popular Front for the Liberation of Palestine, labelled a terrorist organisation by Israel, the European Union and the United States.

Instead, Israeli authorities ordered that he remain in custody for a further six months.

A PFLP spokesman told AFP that under the agreement he would be freed on 12 December.

Amnesty International has called on Israel to either charge or release him and the United Nations says it is "deeply concerned" at his deteriorating health.

"On 13 June 2016, the day of his scheduled release, a six-month administrative detention order was issued against him on unspecified security grounds and relying on secret evidence," Cecile Pouilly, spokeswoman for the UN High Commissioner for Human Rights, said on Tuesday.

"Mr Kayed is reported to be in a critical condition and doctors have informed him that he may suffer irreversible damage to his health," she said.

In Jerusalem on Wednesday, Palestinian protesters demonstrated for Kayed's release, holding posters with his photo and calling for his release and an end to internment without trial, known by Israel as "administrative detention".

Israel says the practice allows authorities to hold suspects while continuing to gather evidence, while Palestinians, human rights groups and members of the international community have condemned the system.

Of more than 7,500 Palestinians currently in Israeli jails, about 700 are being held in administrative detention, Palestinian rights groups say.

"This is the highest number of administrative detainees at a given time since early 2008," the UN said.

Palestinian prisoners have regularly gone on hunger strike in protest.

Bilal Kayed is currently chained by the leg to his bed in the intensive care unit of an Israeli hospital.

Israel's Supreme Court on Tuesday refused to rule on a petition to unchain him, saying the matter was still before a lower court and it could not intervene for now. 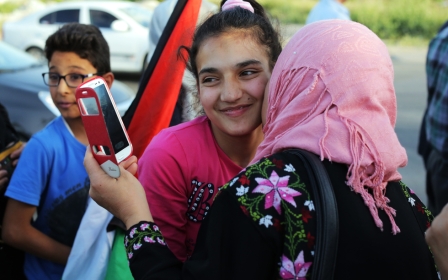