Officials say aim of law enabling Israel to expropriate Palestinian property is annexation of most of West Bank, and call for international sanctions BETHLEHEM, Occupied West Bank - Israel's Knesset was accused of "assassinating" prospects for a two-state peace settlement on Tuesday as Palestinians, the international community and Israeli human rights groups condemned the passing into law of a bill set to legalise the expropriation of privately-owned Palestinian land in the illegally occupied West Bank and East Jerusalem.

The vote, which passed 60-52 on Monday, was brought to the floor just days after Israeli forces evacuated the Israeli settlement outpost of Amona, in accordance with an Israeli High Court ruling.

The legislation was praised by members of the Israeli right, such as Shuli Moalem-Refaeli - the chair of the Jewish Home party and one of the co-sponsors of the bill - who said the law will mean Israelis living in Israeli settlements “will no longer be a target for extremist left-wing organisations that seek to destroy and to damage settlements,” according to Israeli daily Haaretz.

But Mustafa Barghouti, the leader of the Palestinian National Initiative movement, told Middle East Eye that the legislation signalled a turning point in Palestinian-Israeli relations.

“This law is an assassination of the two-state solution,” Barghouti said. “It is an act that aims at annexing most of the land in the West Bank.”

While Israeli authorities already had the ability to confiscate Palestinian land under security auspices as well as declarations of state-land usages, the new legislation now means privately owned Palestinian land can be confiscated exclusively for settlement building, which is deemed illegal under international law.

“I am sure the next step for Israel will be to annex the Maale Adumim settlement,” Barghouti said, referring to an illegal Israeli settlement located in the E1 zone of the occupied West Bank.

“In other words, Israel is legalising settlements, with the intention of annexing them into Israel, that will be the cycle now.” 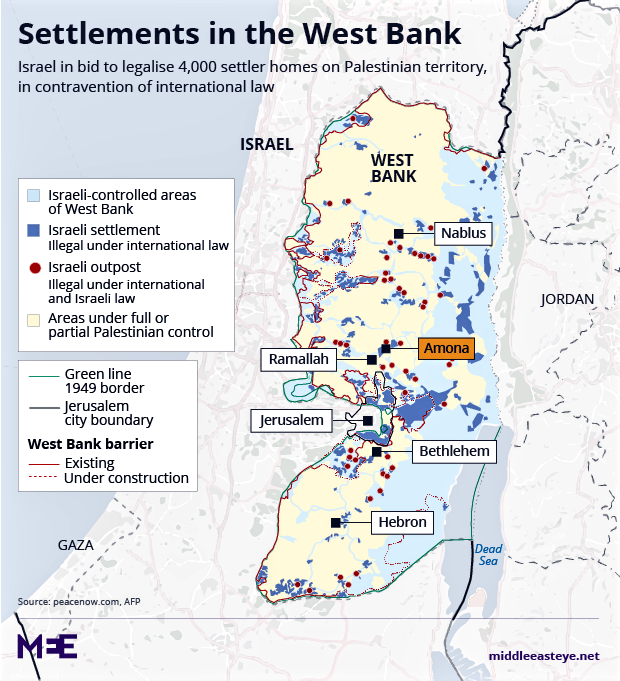 Barghouti’s predictions are in line with Israeli MK Bezalel Smotrich, another co-sponsor of the law, who called the legislation a “historic step toward the completion of a process that we plan to lead; the application of full Israeli sovereignty on all the cities and communities in Judea and Samaria [the term used by the Israeli government to refer to the West Bank].”

The bill’s passing marks the first time the Knesset parliament has ever passed legislation exerting jurisdiction over the West Bank.

“This law is without a doubt grounds for sanctions from the international community,” Barghouti said.

“And there is now no justification for the Palestinian Authority to delay a referral to the International Criminal Court - Israel should be confronted - any lack of punitive actions against Israel now should be considered acceptance of its actions.”

Husam Zumlot, the strategic affairs advisor for Palestinian President Mahmoud Abbas, insisted that the next move in the political sphere must come from the international community.

Zumlot added that the Palestine Liberation Organisation (PLO) had plans to “convene immediately” to discuss the move.

“Once they convene they will take the necessary steps to safeguard national interests of the people,” he said.

Abbas, who was in Paris for talks with French President Francois Hollande, described the law as an "attack against our people" which was against the wishes of the international community.

“It is imperative that the international community, including the United States and the European Union, assumes its moral, human and legal responsibilities and puts an end to Israel’s lawlessness and its system of apartheid and ethnic cleansing,” she said.

What does it say?

It allows Israel to expropriate private Palestinian land on which settlers illegally built outposts. Palestinian landowners would be compensated with cash or given alternative plots.

Settlement watchdog Peace Now says it covers between 53 and 55 outposts set up without formal approval from Israeli authorities. International law considers all settlements to be illegal, but Israel distinguishes between those it sanctions and those it does not. A total of 3,900 homes will now be recognised by Israel, Peace Now says.

Will it be enforced?

Experts, including Israel's attorney general, say the law is likely to be struck down by Israel's Supreme Court and several Israeli NGOs have already announced plans to petition the court.

The bill was promoted by Justice Minister Ayelet Shaked and Education Minister Naftali Bennett, both of the far-right Jewish Home party and members of Prime Minister Benjamin Netanyahu's coalition government. Netanyahu at first criticised it but eventually dropped his overt opposition and did not vote.

“Accountability should include punitive measures and sanctions before it is too late.”

Issa Amro, a Palestinian activist and founder of Youth Against Settlements, told MEE that the PA must take any avenue possible to garner support for punitive actions against Israel by the international community, from the ICC to the UN, and bilateral state actions.

He added that the PA should also encourage Palestinians to stand up against the legislation in the street.

Israeli rights’ group B’Tselem called the legislation a “disgrace for the state and its legislature”.

“The law passed by the Knesset today proves yet again that Israel has no intention of ending its control over the Palestinians or its theft of their land,” the group said in a statement.

“Passing the bill mere weeks after UN Security Council Resolution 2334 [in which the council condemned Israeli settlement activity as a '"flagrant violation' of international law] is a slap in the face of the international community. While enshrining the dispossession in law is a new development, in practice it is another facet of the massive land grab carried out openly for decades by declaring 'state land'.”

“The bill further entrenches the current reality in the West Bank of de facto permanent occupation where Israeli settlers and Palestinians living in the same territory are subject to ‘separate and unequal’ systems of laws, rules and services.”

Shakir ended his statement with a dig at US President Donald Trump’s budding relationship with Israel, stating that “Israeli officials driving settlement policy should know that the Trump administration cannot shield them from the scrutiny of the International Criminal Court, where the prosecutor continues to examine unlawful Israeli settlement activity.” 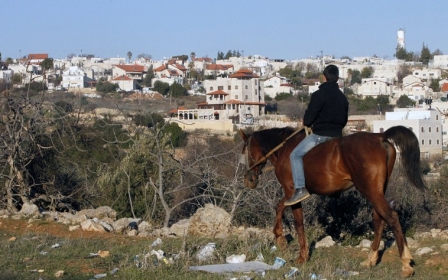